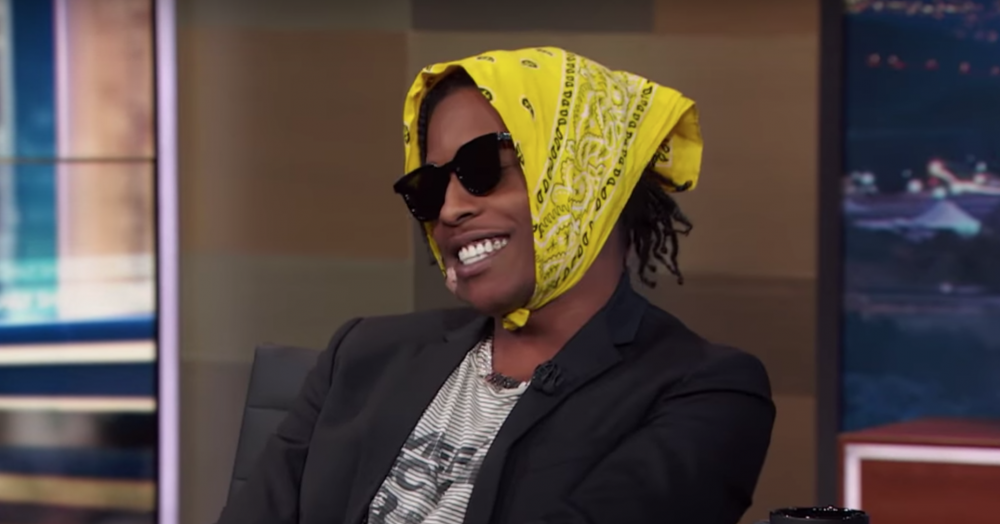 A$AP Rocky wearing a babushka on The Daily Show (Photo via YouTube.)

Two years ago, if you looked up the word “babushka” on Google Images, you’d probably get an eastern European grandmother wearing a headscarf. Today, if you search the same thing, the first few results show a different person — a 31-year-old black rapper from Harlem who goes by the name A$AP Rocky.

The babushka, an item of clothing usually donned by older Jewish women, may not be prototypical of hip-hop. However, A$AP Rocky’s response when asked about his feminine style in an early October issue of British Vogue sure as hell is.

“I do what the fuck I want, Rocky said. “It’s just like hey, you know? There are no boundaries.”

This genderless and boundary-less approach to style is growing fast in a world increasingly intertwining rap with style. Both Rocky and Puerto Rican sensation Bad Bunny are proud to have painted nails, Lil Uzi Vert loves the tailored and tight nature of women’s clothing, Young Thug wore an Alessandro Trincone dress for the cover of his 2016 project, JEFFERY.

[Read more: Three podcasts you should listen to if you’re fashion-obsessed]

It certainly hasn’t always been this way. Hip-hop is often focused on stereotypical masculinity, having taken issue with any sort of behavior that might not be referred to as “manly” in the past.

It’s hard to find a famous rapper that hasn’t used an anti-gay slur, and the genre’s founding fathers like Jay-Z and Ice Cube helped set the trend by putting them in their rhymes. On his hit single, “Where the Hood,” DMX went so far as to say — and I’m paraphrasing — that he would never shake hands with a gay man.

So how does a genre like this reverse course and embrace genderless fashion? With the help of some other genres, of course.

While dressing in a feminine style historically might not have been prevalent in the hip-hop community, rock stars have been doing it for decades. And as music has crossed genre boundaries, the trend has spread.

David Bowie’s skintight bodysuits during his Ziggy Stardust phase and occasional floral dresses were very ahead of their time, choices that now have served as an inspiration for Kanye West. The influence of Prince, an artist so committed to androgyny that his guitar was a literal mashup of the gender symbols, is visible through the dozens of rappers who drop his name in their rhymes.

Looking through a more modern lens, the rise of queer rappers and singers has blazed a trail for other artists — queer or otherwise — to embrace self-expression. There’s Brockhampton, a rap group full of emotionally-vulnerable young men, led by the talented Kevin Abstract, who came out as gay in 2016. There’s Young M.A., a powerful Brooklyn emcee who previously identified as a lesbian, but said this year she doesn’t feel a need to label her sexuality anymore.

And, of course, there’s also Frank Ocean, who’s responsible for two of the best albums of the past ten years. Ocean’s impact on the genre cannot be understated: His decision to come out in 2013 tested how the genre would treat one of its rising stars making an announcement that was not in-line with seemingly core values of hip-hop.

In comparison to the scrutiny that queer artists face, the fruits of these artists’ labor — that straight rappers can now wear a babushka or a dress without feeling embarrassed — almost seems trivial. And, however much of a step in the right direction this is, homophobia is far from eradicated in the genre. But whether it’s consciously or subconsciously, the gender-fluid nature of today’s fashion choices in hip-hop show support for progress — and that’s something to be applauded.