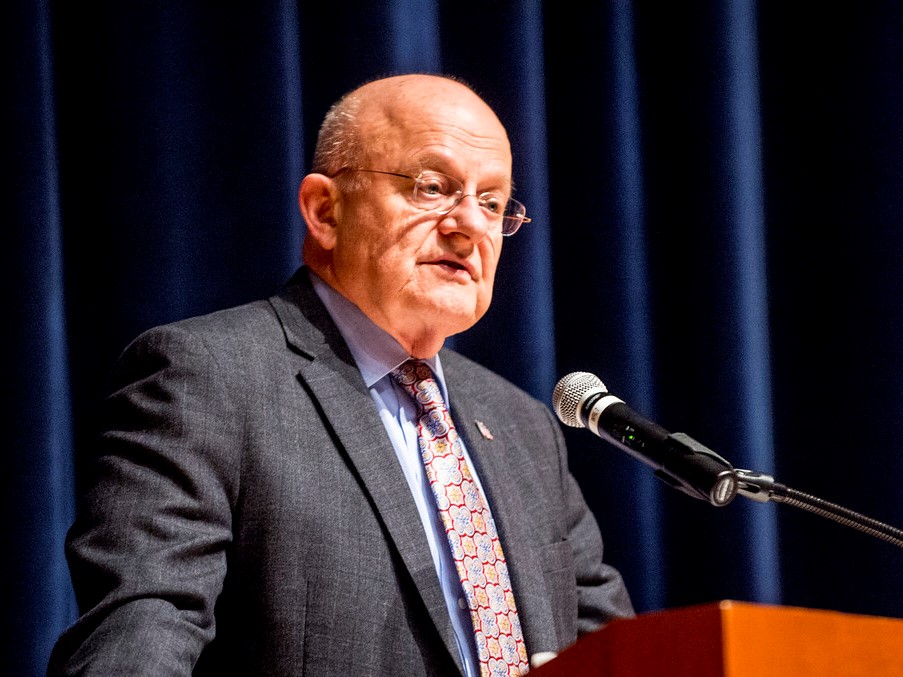 Retired Air Force Lt. Gen. James Clapper speaks to the Corp of Cadets in New London, Connecticut on March 23, 2016 as the 2016 Hedricks Fellow. (Image via Flickr)

Former Director of National Intelligence James Clapper will speak at the University of Maryland’s winter commencement, the school announced Tuesday.

Clapper, who graduated from this university in 1963, served as the director of national intelligence under former President Barack Obama from 2010 to 2017. He did intelligence work for the military during his 32 years of service and served as an adviser to Congress and the defense and energy departments with regards to intelligence matters.

He reentered the government two days after 9/11, serving as the first civilian director for the National Imagery and Mapping Agency for nearly five years.

“During his half century serving our nation’s security, General Clapper earned a reputation for helping unify the Intelligence Services and speaking truth to power. He has an important message to share with our graduates and this campus,” university President Wallace Loh said in a statement. “We are delighted to welcome him back to his Alma Mater.”

For years, Clapper told The Diamondback, he couldn’t remember who spoke at his commencement or what they said. When he found the program he’d kept, he realized it was then-Vice President Lyndon B. Johnson.

So, he said, he plans to approach his role with a sense of “humility.”

In the crux of his speech — which will be held at Xfinity Center on Dec. 17 — Clapper plans to advise graduates on the importance of truth-telling and the value of kindness in leadership, he said.

“We have a serious problem in this country. And this is not a shot at Trump or anybody else. It’s just a general phenomenon with this assault on truth on those institutions that depend on truth and empirical facts,” Clapper said. “This is not good for our democracy or any democracy.”

He added that he hopes the graduates choose to be honest.

“They, as intellectual leaders, need to always insist on — to the best of their ability — pursuing the truth,” he said.

In March 2013, Clapper drew national headlines for giving testimony with false information to the U.S. Senate Intelligence Committee, stating the National Security Agency did not collect data on most Americans. Months later, former CIA employee Edward Snowden revealed that the NSA had collected metadata on millions of Americans. Clapper was not prosecuted for perjury and maintained that he did not lie to Congress but rather “made a mistake” in his testimony.

Clapper worked under two Directors of the National Security Agency who had “very different leadership styles,” he said. It taught him that kindness and harsher leadership can both be powerful forms of management — but that being kind works far better in the long run.

As a student at this university, Clapper was a member of the ROTC program, which he said had a “huge impact” on his prospects of joining the United States Air Force. He added that this university taught him critical thinking and research skills.

He said he was grateful to Loh and this university for selecting him as the speaker, he said.

“I was honored and thrilled to be asked,” Clapper said. “It was very unexpected, and I’m very pleased.”