UMD can’t protect students until it clarifies its demonstration policy 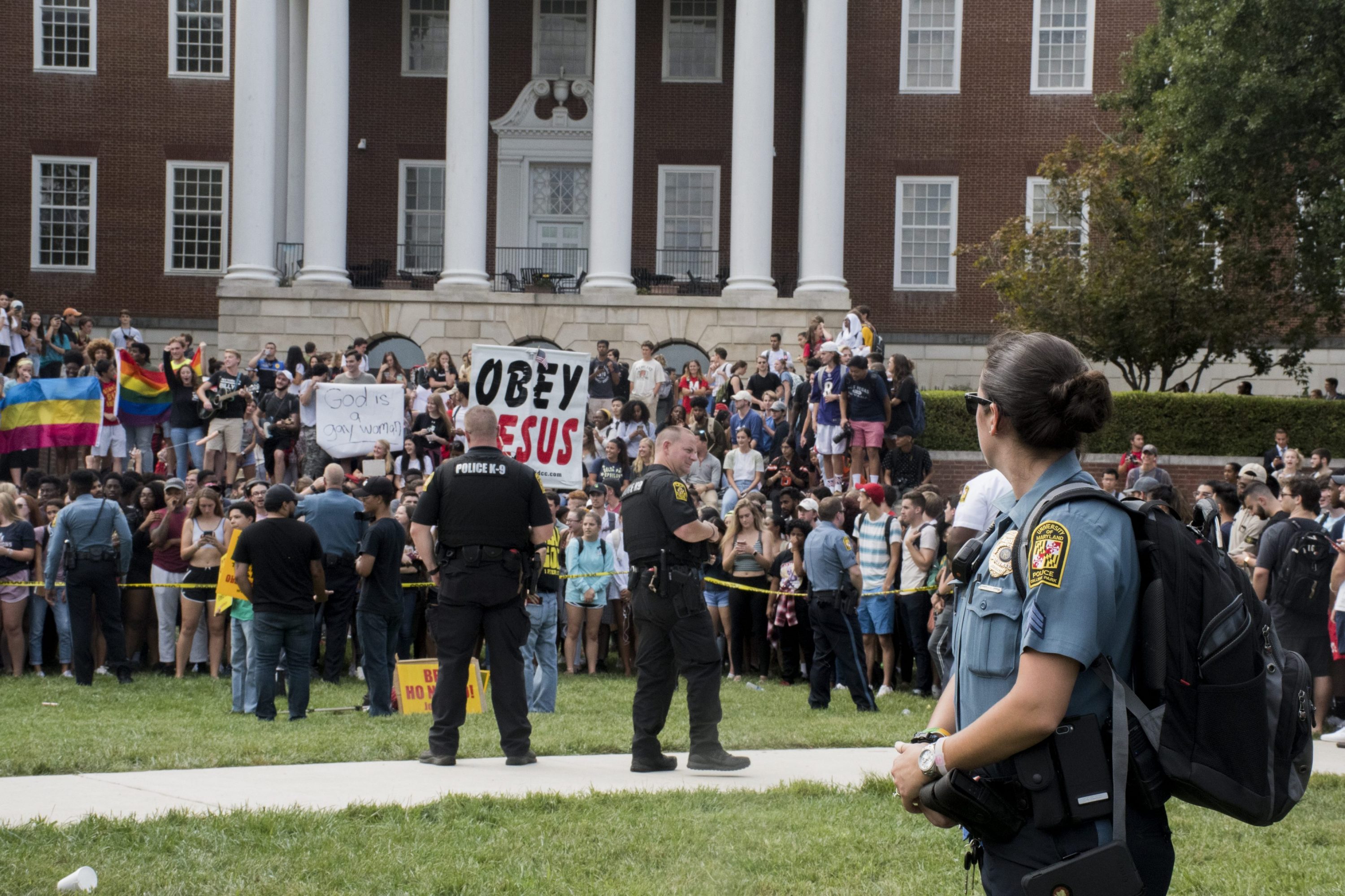 My biggest concern was making sure my friend was OK. I ran down the steps in front of McKeldin Library and grabbed her hand. I told her those people were just irrational reactionaries. I didn’t interact with the demonstrators — members of a religious group called the Key of David Christian Center. But as I pulled her away, I heard one of them yell at me, saying how that weekend might have been the “lucky weekend” I would be raped.

If this had occurred on a random street, I would likely have been shaken but would’ve moved on and avoided the area. But seeing a random group have such abusive power on my own campus made me burn with outrage and fear. In the aftermath of the infamous Key of David protest, these feelings compounded into a needlessly long investigation into the University of Maryland’s policy on demonstrations. My monthlong trip down this rabbit hole showed me that the guidelines must be clearer and interpreted to safeguard the free expression of vulnerable students who are protected under the First Amendment just as much as demonstrators are.

When I spoke to a university official, they were not able to obtain a response as to whether this section of the policy applies to outside groups starting demonstrations uninvited or joining existing demonstrations uninvited. They directed me to a new University Senate policy — which outlines how groups can go about requesting and using spaces on campus in a way that won’t interfere with university events or student safety — that President Wallace Loh approved a week after the protest. So, while we can now better understand how groups may reserve certain places on the campus for activities that protected under the First Amendment, the question of whether outside groups can simply create their own demonstration unannounced and uninvited on university property remains unanswered.

In addition to the section on non-university members, it’s important to discuss how the Guidelines on Demonstrations and Leafletting apply to the kind of speech the Key of David demonstrators were using. The university should be clearer in its language and interpretation — what happened last month is definitely not the last or the worst event of its kind, so the university needs to have transparent guidelines that protect the free speech of individuals while balancing the rights of those who are the targets of hate speech.

In the guidelines, there is a rule stating that “persons shall not engage in harassing, physically abusive, threatening or intimidating conduct toward any person.” The penalty for individuals who do not belong to the university and break its demonstration rules is “appropriate action under State and Federal law.” In my frustratingly lengthy exchange with the aforementioned university official, I learned that this university defers to the University of Maryland Police Department in matters concerning what “conduct” is acceptable, and that “conduct” is interpreted as applying only to physical conduct. This can be rather confusing given that “physically abusive” conduct is singled out among other words such as “harassing” and “threatening,” which carry a verbal connotation. If the university is really only referring to physical conduct, it should specify that, given that most students don’t have time to incessantly email administrators over the course of a month to deduce the meaning of this policy.

In the end, the paradox of free speech lies in the way that hate speech, when allowed to flourish, directly attacks vulnerable groups’ freedom of expression. And while the demonstrators may have been protected by the First Amendment, this university’s policy on demonstrations does not appear equipped to deal with situations like the Key of David protest — events that demand transparent and decisive action to protect students. If we can’t strive for perfection, let’s at least strive to make students feel as protected expressing their identities on this campus as the Key of David demonstrators felt hurling epithets and threats.