Review: The Chainsmokers brought their World War Joy tour to D.C. and it brought me no joy 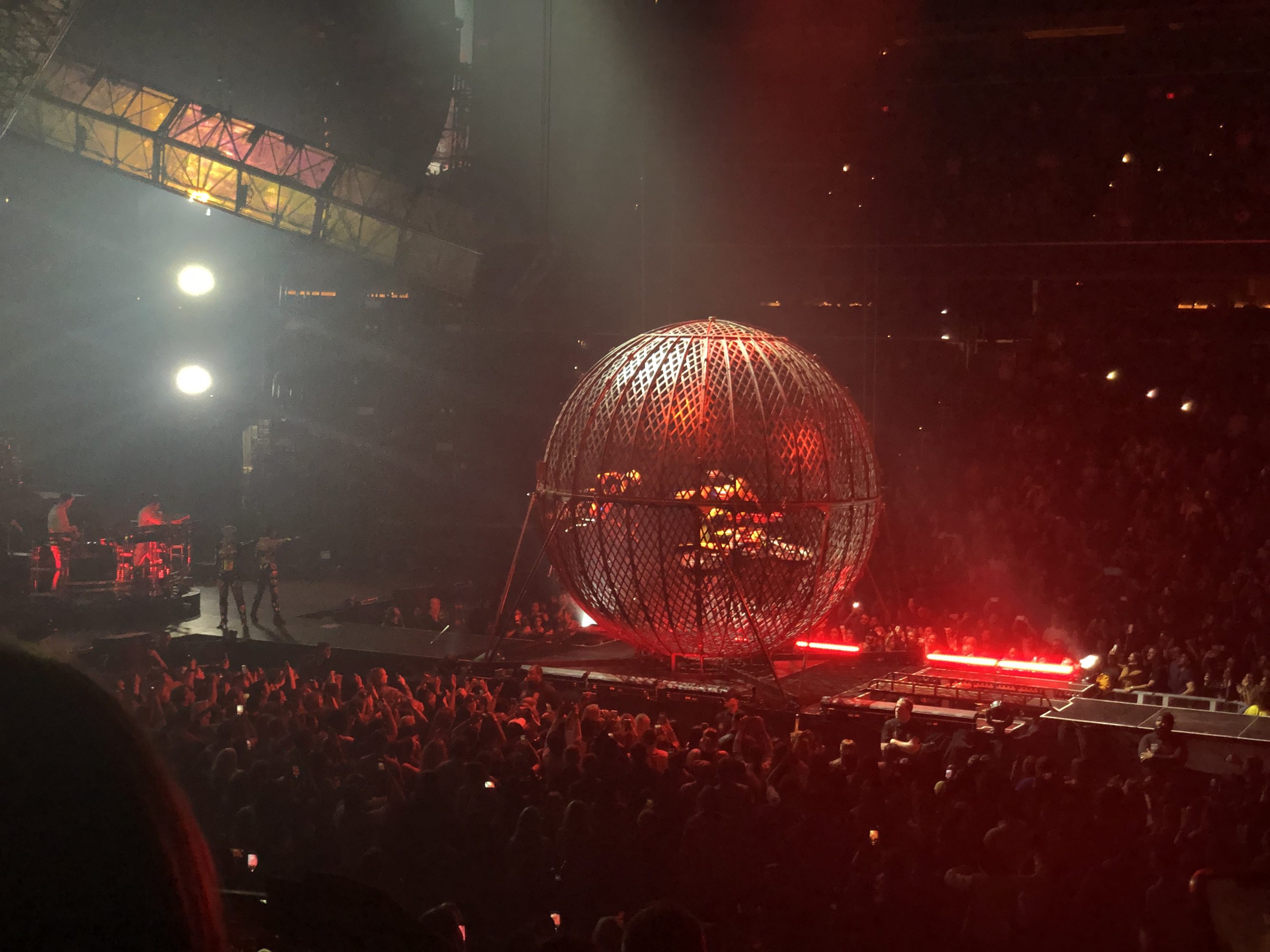 Motorcyclists sped around a large metal ball during The Chainsmokers concert at Capital One Arena on Tuesday, Oct. 15, 2019, for a reason I cannot discern (Allison O’Reilly/For The Diamondback).

Before The Chainsmokers concert at Capital One Arena on Tuesday, I had never been to a full-on EDM concert. I had never immersed myself in the horrific world of “beep boop music” and crazed MDMA-fueled dancing. So I decided to give the electropop giants a chance and lean into the experience … but my open mind didn’t last long.

By the first song, I was already overwhelmed by the insane noises that didn’t sound like music and all the fire and smoke and lights and bad dancing. It was as if I were at a zoo for party animals, or worse yet, a fraternity party.

Honestly, I didn’t even expect The Chainsmokers’ concert to give off such heavy EDM vibes. Most of their songs that I knew prior to the show just sound like modern pop music, but noises were happening at the concert that I can’t even describe in words.

I had a really shitty day leading up to this concert. I didn’t get out of bed until 5 p.m. because mental illness plagues my every move. But nevertheless, I persisted, because I really wanted The Chainsmokers and all their basicness to bring me joy. And given that their tour was named World War Joy, I really thought they could.

I wanted to leave the concert feeling revived, with a new perception of The Chainsmokers that allowed me to escape the hard life of being a depressed music snob and relax through repeated chord progressions and excessive electronic flair. But I left joyless, simply wondering why people enjoy this stuff and feeling really bad for laughing internally at all the glitter-covered locals around me.

And I will admit, a lot of their songs are catchy. They aren’t performing shows at arenas without reason — they make music that people like and I can concede that fact. But I still don’t get it! I don’t understand the appeal of bass so loud it makes my esophagus shake or music so basic and repetitive and unoriginal that it requires pyrotechnics and motorcycles in a metal ball to breathe some life to it.

The only part of the concert that I thoroughly enjoyed was when 5 Seconds of Summer came on stage to perform “Who Do You Love,” that one song you heard on top-40 radio stations at least three times a day over the summer. Unlike The Chainsmokers’ Drew Taggart, who looks like he could’ve been randomly plucked off of Frat Row minutes before the show, Luke Hemmings of 5SOS is an incredible vocalist and frontman. He brought energy to the stage that I desperately desired for the rest of The Chainsmokers’ set.

So you heard it here first folks, EDM is trash no matter how many bright lights and circus tricks you use to try and mask it. I am happy to leave The Chainsmokers for the locals and I will never attend an EDM show again.