Review: Sunset Rollercoaster’s Pie Shop concert was out of this world 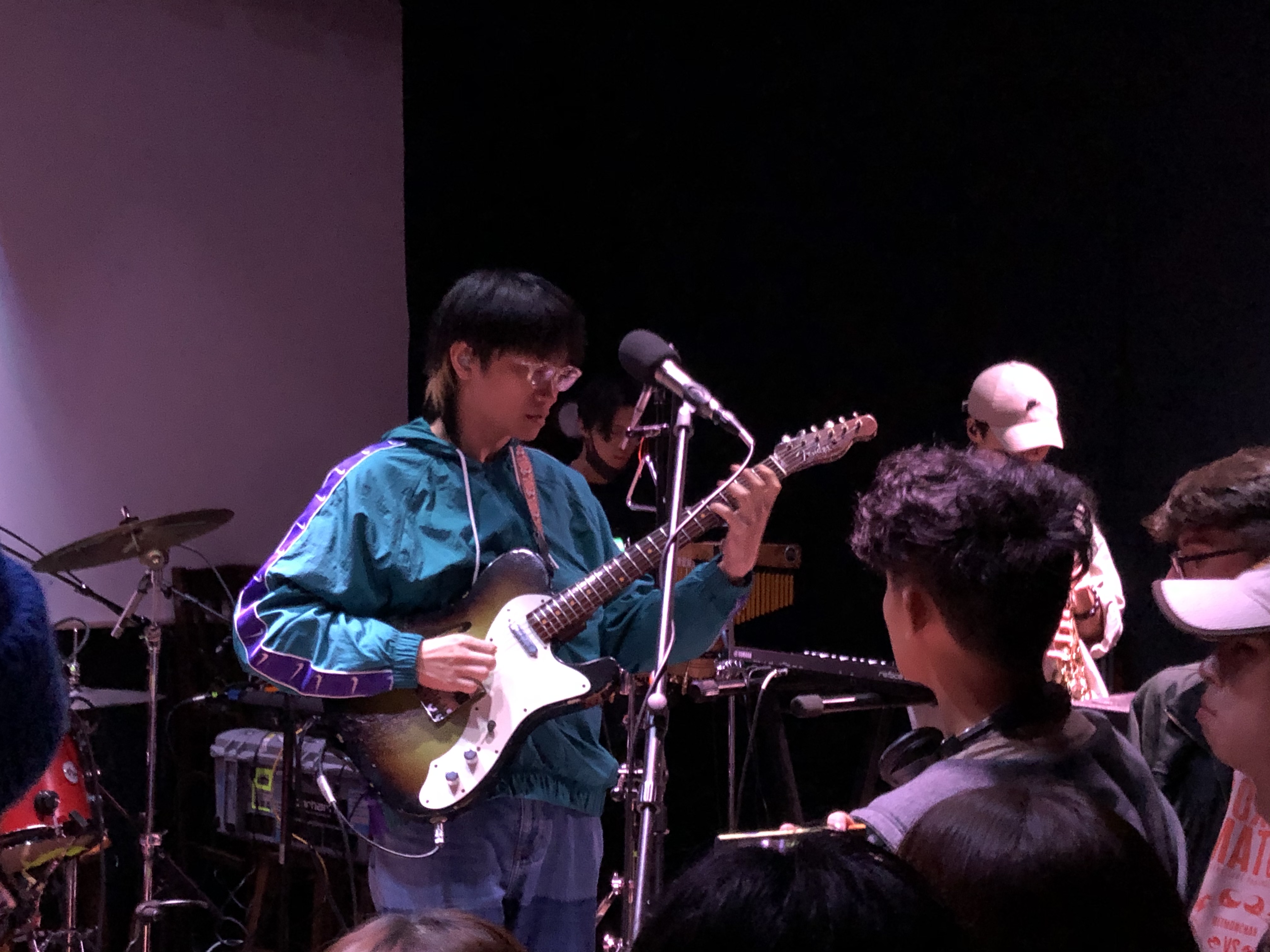 Sunset Rollercoaster performing at the Pie Shop on Oct. 10, 2019 (The Diamondback/Iris Vukmanovic.)

I’ve thought a lot about the name Sunset Rollercoaster since deciding to go to the Taiwanese band’s concert a few weeks ago. Lead singer Tseng Kuo-Hung, or Kuo Kuo, told me it was a random name that came from taking a silly picture on PhotoBooth about ten years ago for their MySpace profile. Many bands go through name-changes and re-brands in their formative years, so I wondered, why hasn’t this one?

However, as I stood in the crowd last Thursday night during the band’s concert at Pie Shop, taking in the music, I understood why it’s stayed the same all this time. Their music captures the euphoria of riding on a rollercoaster — the excitement and the uncertainty of high-speed twists and turns. But it also captures the warmth, comfort and stillness of watching the sunset on a warm summer evening.

Despite all the members being from Taipei, Taiwan, all of Sunset’s songs are written and performed in English. Kuo Kuo said this was partially spawned from the desire to seem “professional” and reach a wider audience on the internet, but there’s also an element of fun to it.

“I feel like if English is not my native language … I don’t have any like cultural burden. Or I don’t have to be exactly PC or something too right. … Every time I sing or write in English … I feel like I’m a unicorn just flying around in an imaginary sea or sky,” Kuo Kuo said.

This was their first show in the American leg of their tour, and one of many that sold out. I saw the dedication of the fans present as they descended upon the merch table before the concert even started and bought half of what was available. Gaggles of girls giggled as they received autographs and photos from the band’s saxophonist Huang Hao-Ting who bowed and smiled graciously at the compliments sent his way.

The Pie Shop venue is fairly small and allows for the members of the band to mill around with the audience if they want to — specifically requiring them to walk through the crowd to reach the stage for their performance. Before the show, I saw drummer Lo Tsun-Lung get some “dangerously delicious pie” downstairs and almost didn’t realize it was him. Band members were around but not many seemed to notice, until Kuo Kuo arrived with his bright Kelly green jacket, making a beeline through the center of the crowd right to the stage.

As the band started to play, I found myself transported to another world. It seemed like each member of the band was playing by themselves, particularly evident in the fact that Kuo Kuo’s eyes were closed for a majority of the set.

Normally something like this would bother me because it can seem like the band is unengaged and not concerned about performance quality or connecting with the audience. But here, it didn’t matter, their personality and passion were loud and clear through the way they expertly played their instruments in synchronicity.

Listening to their performance felt like a big warm hug wrapping itself around my soul. I felt seen and acknowledged, even though no one was addressing me specifically. The audience around me swayed and bobbed in tranquility — singing along to some of the band’s biggest hits such as“My Jinji” and “I Know You Know I Love You” — and it felt like we were transported to another realm with Sunset Rollercoaster.

It was particularly jarring to step out of the crowd for a few moments and find myself jolted back into reality, as if taken out of a hypnotic trance. Within the crowd, listening to Sunset’s music, time and space didn’t matter. Nothing mattered but the sweet euphoria of the music that I can only compare to the sensation of surprise and all-encompassing flavor that bursts in your mouth when you eat a Gusher.

This unreal reality that Sunset creates goes along well with, and must come from, Kuo Kuo’s whimsical imagination. He likened the best part of performing, the silence between songs, to the feeling of being in a video game.

I think the best part of it all was the feeling of quiet connection shared between everyone at the concert that night. Regardless of the language we speak or the country we’re from we can all understand the sweet, and kind of silly, romantic longing in Sunset Rollercoaster’s music.

Kuo Kuo said he wants to share ideas about what it is to be a human being, and that music can help convey things language cannot.

“I think music is just a tiny invisible bridge to connecting human beings,” Kuo Kuo said. “I feel hope that music cannot just be a tool, but it can really be a communicational bridge, so we can really connect with each other deep inside our heart. And that’s you know my hope.”

In retrospect, I do think a tiny bridge between people was formed that night — a small rollercoaster that rode off into the warm summer sunset.