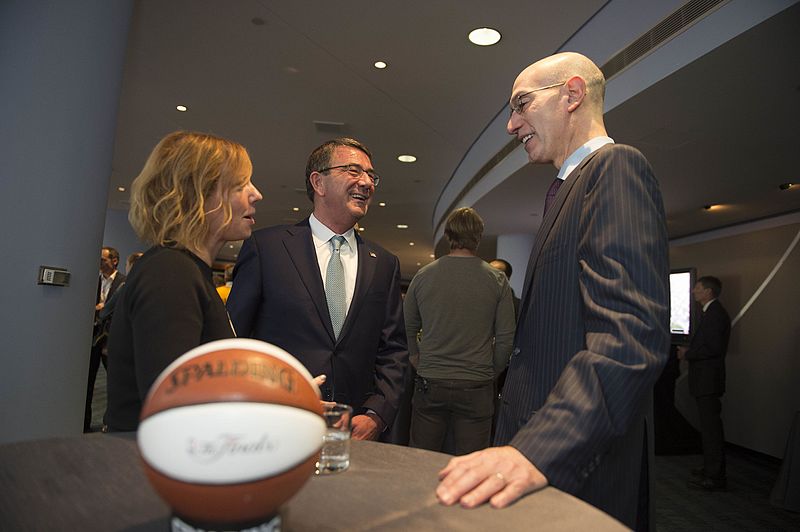 These were supposed to be the weeks leading up to the most exciting NBA season in recent memory. Instead, they may mark the end of the NBA’s era of woke prosperity. Ever since 2014, when newly-instated commissioner Adam Silver swiftly booted Donald Sterling — the flamboyantly racist Clippers chairman — the NBA has sold itself (with the gleeful assistance of journalists) as a multicultural utopia that also makes a boatload of money. The narrative that players and coaches, from LeBron James to Gregg Popovich, could speak out on matters of conscience, continued as the league grew into a global behemoth.

Recent events have done permanent damage to that narrative. Daryl Morey, general manager of the Houston Rockets, tweeted an innocuous message of support for Hong Kong protesters: “Fight for freedom, stand with Hong Kong.” The backlash was astounding. Numerous Chinese companies, including the firm that holds the NBA’s streaming rights in China, cut ties with the Rockets. Morey, under pressure from the Rockets’ owner, deleted his tweet and released a semi-apology.

The NBA released a statement calling Morey’s tweet “regrettable,” sparking outrage from political figures across the ideological spectrum, from Elizabeth Warren to Ted Cruz. In a press conference in China with two Rockets stars, a PR person cut off a reporter asking about the controversy. In a Washington Wizards exhibition game against a Chinese team, staff confiscated a sign denouncing the Chinese government’s crackdown in Hong Kong. At the end of the day, it’s astounding how effectively the Chinese government has exported its censorship practices into America’s best sport.

This scandal, which represents the biggest challenge of Adam Silver’s tenure, has already done serious damage to its woke image. Now, there are only two types of outcomes for the NBA going forward: the NBA either becomes much poorer or much less woke.

If the NBA fails to assuage Chinese officials’ anger, it stands to lose a remarkable amount of money. It has spent decades trying to expand into the Chinese market, and with great success. Last year, nearly 500 million Chinese citizens watched the league. And the NBA’s deal with tencent, the Chinese company that owns the league’s streaming rights, is worth $1.5 billion. If the NBA makes a dramatic change in course and doubles down on its self-proclaimed values, it could be an economic disaster.

But if the NBA continues on its current course, its reputation will end up in tatters. If the league continues to prevent fans from quietly supporting a democratic movement, if previously outspoken figures like Golden State Warriors coach Steve Kerr continue to demur and say that the world is a complicated place, if public relations lackeys continue to prevent reporters from asking questions, the NBA’s progressive self-conception will be a punchline.

To make matters worse, the coverage of this scandal has been almost universally dreadful (Deadspin has been good). ESPN, by far the biggest player in NBA media, has sent employees a memo prohibiting them from discussing the politics of the Hong Kong protests. When ESPN reporters have commented on the issue, it’s mostly been mealy-mouthed both sides-ism. Ramona Shelburne, an ESPN reporter, wisely observed, “People on both sides of this issue, whether you are in mainland China, Hong Kong, or around the world feel strongly about their positions.” And Bill Simmons, CEO of The Ringer and a titan in NBA media, has turned the issue into an opportunity to complain about Twitter, “It’s extremely complicated and has a lot of sides to it. And unfortunately we live in a world now in 2019, where everything has to be black and white on Twitter.”

Indeed, the supposed impossible complexity and nuance of the problem has been a touchstone of the coverage. This line mistakes historical or empirical complexity for moral complexity. It would take years and years of study to fully understand the history of Hong Kong sovereignty movements or the economics of international sports streaming or the dynamics of Chinese public opinion. Nobody’s expecting NBA reporters to become experts overnight.

But this, at its core, is about one thing: An autocratic government, and the firms subject to it, using its economic heft to coerce a high-level NBA official into shutting up about said government’s autocratic behavior. It’s about making a league where players, coaches and executives are permitted to speak their mind about matters of conscience — unless doing so challenges the league’s bottom line. In moral terms, that’s not too complicated — it’s just wrong.