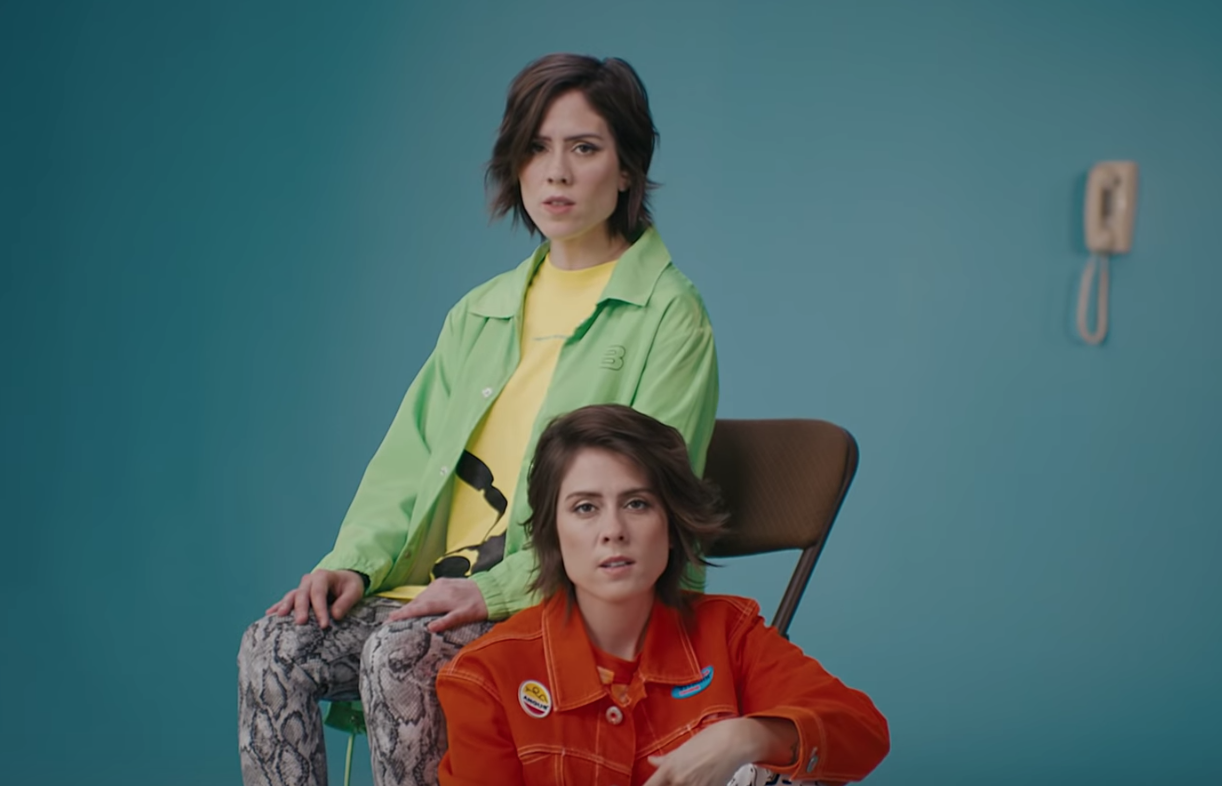 Tegan and Sara in their music video for 'I'll Be Back Someday' (Photo via YouTube).

Tegan and Sara just released their ninth studio album, Hey, I’m Just Like You. The album consists of 12 tracks from when the identical twin sisters were in high school — re-recorded and fresh.

The music is like a time capsule from the ’90s with a current twist. The inspiration for the modern hits is clear within these preserved tracks, which came out right after the release of the duo’s memoir, High School.

In this album, there is an angsty teen voice filtered through two decades of music experience. The lyrics sound like a 15-year-old girl wrote them in her bedroom while pining for her crush, but with the production value and voice of experienced musicians. The musical pair is nearly forty, but these lyrics aren’t silly — not in high school and not now. Something about the preserved innocence makes them special.

The twins have been incredibly open about their sexualities  — both are gay — and involved in activism throughout their careers. This album is a peek into a world before they were successful and had the confidence to express themselves in their music, before two gay sisters from Canada were artists other teens could look up to.

Surely, Tegan and Sara were more talented than a lot of teenagers. But there is a clear streak of identity crises and self-importance that any woman could see, and maybe miss, in their high school self. Instead of hiding away these parts of themselves — their earliest tracklist — they’ve made it their latest accomplishment.

Lines such as “What if I become all  the horrible things I said that I would never be?” from “Please Help Me” ring differently when you actually have grown up. Did you become those things? Did you become who you wanted to become?

“I’ll Be Back Someday” has hardcore girl band of the’90s vibes. The duo’s Nirvana and Hole influences can be felt. “Hello, I’m Right Here,” rings with adolescent anguish. It was written in response to Sara’s rejection from her high school “muse,” she said in an October 6 tweet.

While the songs don’t openly explore sexuality the way other parts of their discography do, Sara tweeted that her high school experiences inspired her to write music and imagine a future where she could finally accept herself.

“You Go Away and I Don’t Mind” has a modern beat but a similar theme. “I’m complicated. I was raised by icons,” they sing, as if that’s not ridiculous. But it’s their matured sense of self-awareness that makes the song enjoyable, not funny.

“All I Have To Give The World Is Me” is the ultimate sad scene girl anthem. It’s filled with angst and that radical sort of self-acceptance that girls have to chase down to avoid losing in the face of growing up.

Creators often desperately try to forget their beginnings; they hope that homemade videos and old social media posts never break out where people will see them. Tegan and Sara have decided to preserve those hopeful and emotional parts of themselves.

Their target audience, who listened to them in the ’90s and 2000s, has grown out of their teens and twenties. They’re growing older. This album is a reminder of the people they were when they began listening to Tegan and Sara.

I wish more artists would revisit what brought them to music, particularly aging female artists. The sounds and composure of these teenage girls in the ’90s is sometimes light and airy but so genuine, it’s impossible not to enjoy it.