Interview: The student journalist who beat the New York Times to a national story 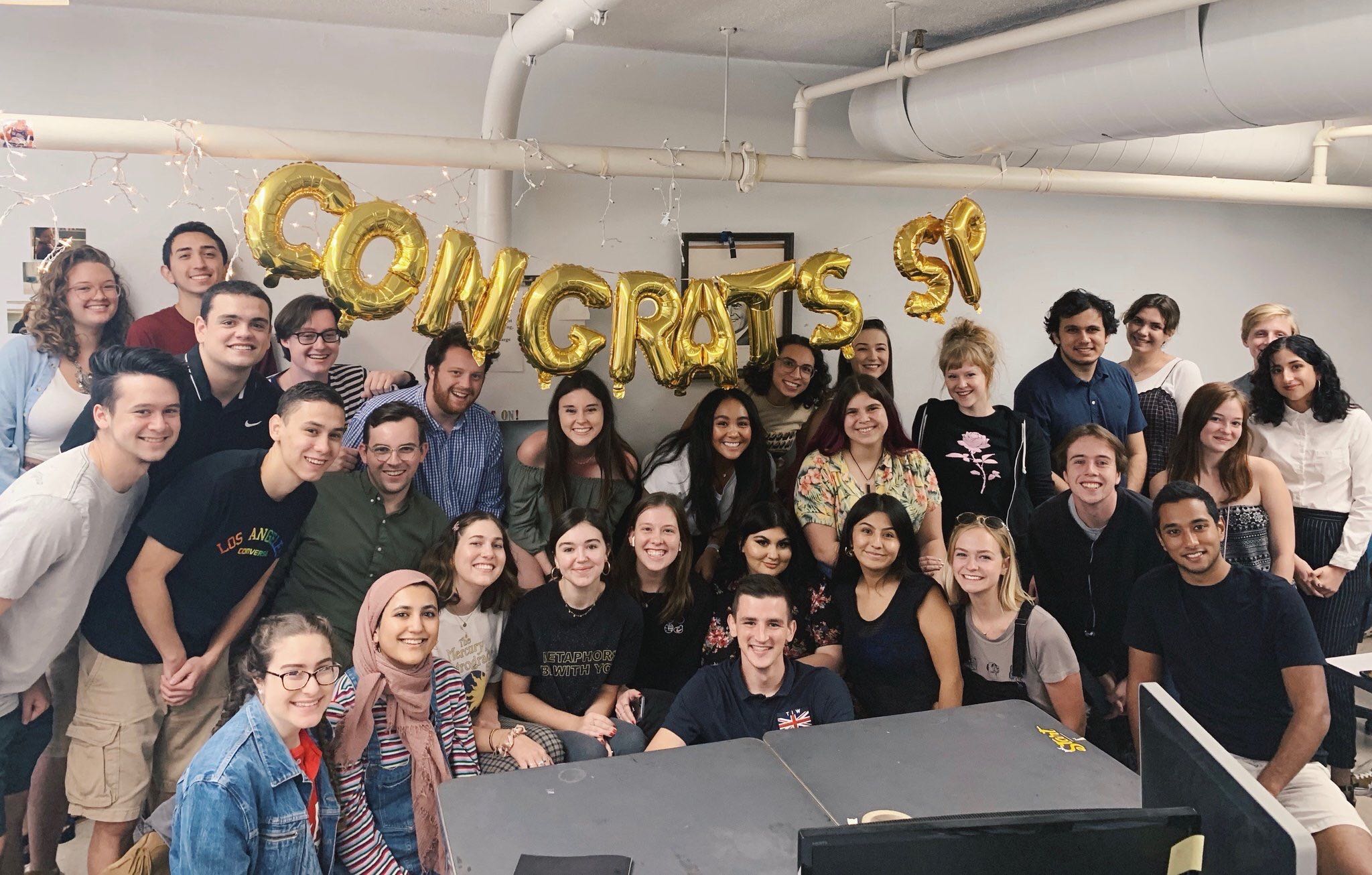 The staff of The State Press celebrates the success of their story Sunday night, September 29 (Photo Courtesy Maya Foxall.)

Thankfully, this story will be a go, much to the satisfaction of my journalism-major, born-and-raised Arizonan-self.

In case you haven’t been paying attention to the news, House Speaker Nancy Pelosi launched an impeachment inquiry into President Donald Trump on Sept. 24, after he acknowledged that he had asked the president of Ukraine to investigate Democratic presidential candidate Joe Biden.

Three days later, Arizona State University’s student newspaper, The State Press, broke the news that the State Department’s special envoy to Ukraine, Kurt Volker, had resigned from his position. He was also the executive director of the McCain Institute, a university-affiliated organization, which he resigned from Monday.

The New York Times, The Washington Post, CNN, Reuters and The Associated Press, among other outlets, picked up the story later.

On Sunday, I sat down — or rather, sat down at my desk — with junior Andrew Howard, who wrote the story for The State Press. He’s a native Phoenician, and a journalism major interning at The Arizona Republic. He’s worked at The State Press since his freshman year and is currently one of the paper’s two managing editors.

This interview has been edited for grammar, length and clarity.

Start me off with the process of getting the Volker story — what that looked like and what challenges you ran into.

The outlets we’ve been talking to sort of wanted something more to be there than there was. It was fairly simple. Thursday evening we were talking — me, the editor in chief and the other managing editor — and we were like, “Well, this is a great way to localize a national story. This guy works at ASU and we want to cover ASU.”

I don’t want to say we stumbled into it because we asked the questions and we did the reporting, but at the end of the day, it just came to us because we wanted to localize the story and we approached it differently, I think.

That’s how we stumbled into it, and the rest is sort of history. We knew we had a big story, but I’m not sure we ever knew the magnitude [of attention] it would generate.

When did you first realize the story was picking up a different kind of traction? I know in a few of your interviews you mentioned that, in the moment, you were thinking about local papers and not really the national.

Yeah, because that’s really where our competition is, the local outlets. I never in my right mind thought, “Oh, we’re going to beat the Times today.”

I think it really hit me when BBC called me and asked me if I could do an interview. I was like “Oh, okay, this is a big story.” Twenty minutes after we published it, they were talking about it on CNN. We were all just really, really proud to be a part of the paper.

That was the coolest thing — to be able to see so many people clicking on our website or following our Twitter account or liking our Facebook. Now we have so many more people who we can reach and who can see our content, and that was really cool for us.

As a student journalist, how has being the interviewee instead of the interviewer been? I’m sure that’s been a different role for you.

I don’t want to say I’ve hated it, but I’ve kind of hated it. It’s been great, it’s been great for the paper. I would never say no to an interview. I will say I think the coverage has been great, but it’s also very weird being on the other side of it.

Doing all of that and being exhausted for two weeks straight — I guess almost two weeks. It’s really only been a week now, but it feels like two weeks. Doing all of that, part of what was in the back of my mind was, how are we going to follow up on this?

We published a story Thursday. We also published another story Friday, actually, following up on Volker, but what was always on my mind while being interviewed was that if I wasn’t doing this, I could be doing more reporting.

We can’t just break some big national news and then just leave it and never follow up on it. Journalistically, that would be incredibly bad for our readers. We shouldn’t just use it to get more popular but we should also continue to follow up and serve our community.

What did it look like in your newsroom the following week after the story was picked up?

Oh my god, we were just thrilled. I think that’s really it.

We have e-board and pitch meetings for reporters every Sunday. The story broke Friday so the first time we got together as a staff — a few of us met up on Friday night after — but on Sunday, we all went into the newsroom and our editor in chief bought us balloons that said “Congrats SP” and we popped Martinelli’s sparkling apple cider instead of champagne and we ordered pizza.

I don’t want to say we basked in it because it was really back to work by the time we all met up, but it was an environment in the newsroom that we haven’t had in awhile, in the sense that we all love what we do, but we were all so excited.

It was something we tried to emphasize as much as possible in all the interviews. We talked about it to Teen Vogue too, that’s probably where we were the most straightforward with it.

We as a newsroom have always just called ourselves “journalists.” The word “student” is not in there, in our minds. And I think that this whole thing has proved that student journalists are just journalists.

We are just reporters. We are doing our jobs. That’s the only way I can say it is, that I think that we sort of proved it. Student journalists can be as involved and can break as big of stories as anyone else.

It might not happen as often, but something that people have to remember, too, is that the “student” part is important because of how much we do outside of this. The student paper is in addition to everything that we already do.

Everyone is very involved, we all have internships, we all have full course loads and we can still do this. I think that’s a testament to how hard everyone in our newsroom works and how much we care about what we do.

Not that many people are willing to come in for five hours on a Sunday to edit, or work from 5 to 9 every night. Being a student is hard work alone, and being able to do this work on top of it is very special.

I had to do a six-page paper the day after we broke the story. It’s hilarious. I was like, “Hey, I can’t talk right now. I have to turn in this essay.”

Is there anything you think I might have missed?

The one thing I will add is that the biggest conversation in our newsroom has been, “What can we do next?”

Everything we do from this day forward will [bring] more readers and more attention, and we are more focused than ever on making sure we do a really good job.

We prove ourselves in our reporting after the big scoop. Our everyday reporting is just as important to us.