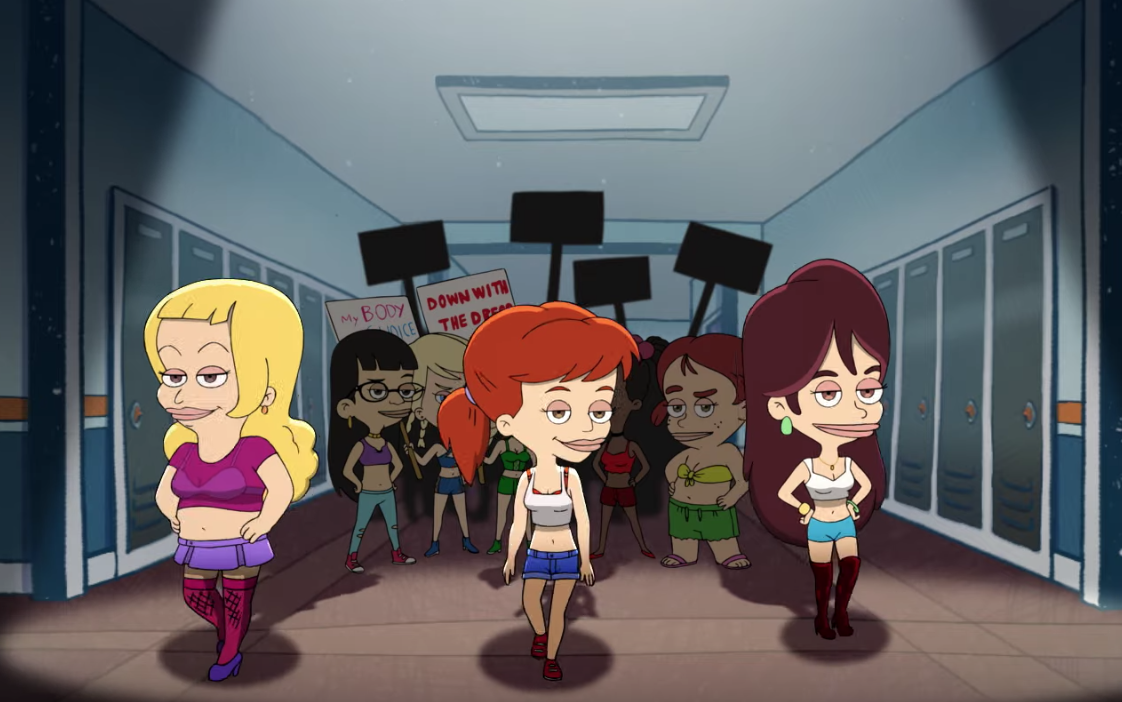 'Big Mouth' Season 3 addresses topics such as the #metoo movement (Photo via YouTube.)

There’s nothing like sitting in your bed for five hours to binge watch Season 3 of Big Mouth. The show’s newest season premiered on Friday with timely — albeit satirical — conversations about the #MeToo movement and the LGBTQ+ spectrum, among other topics. With the Shame Wizard gone, this season focuses on personal growth and showed it through our favorite characters.

For a cartoon about middle schoolers, the show is very much not for children. One of its best qualities is that because it’s fictional, everything can be taken to a hyperbolic extreme. The show can display as many cartoon 13-year-old dick pics and personified vaginas as it wants — and it’s not as weird as you’d think.

The first episode hones in on the female characters’ rage over a new dress code, put in place to help the boys control their more primal urges. The whole thing centers on the “boys will be boys” concept, a motif as the season progresses.

The girls decide to protest the dress code by wearing the most revealing outfits possible. Missy, the soft-spoken, nerdy feminist didn’t want to wear that stuff, so when she came to school in her regular overalls, all the girls shamed her.

In a rage, Missy screams at boys, girls and teachers alike, because she’s so sick and tired of other people controlling her life. The scene has an underlying message about the new wave of feminism, and how it comes in all shapes and sizes, even if some can’t see that. And for Missy — someone who was never really able to stand up for herself — this episode lays the groundwork for her increasing self-confidence in a world shrouded by the impending “Shame Wizard.”

Jay’s journey to coming out as bisexual is enlightening, and there’s a whole musical number dedicated to explaining different possible sexual preferences. However, you can’t help but feel bad when no one at the school wants to accept him, yet everyone latches onto the new girl, Ali, who identifies as pansexual.

Though only relevant for one episode, her character provides an important message about the differences in how people treat people who are attracted to multiple genders.

When Ali starts at the new school, she’s at the top of everyone’s hottest girl list. But when Jay comes out, he’s met with caution. Some claim he’s only doing it for attention, or that this is just a pit stop on his journey to becoming “fully gay.”

This review would be incomplete if I didn’t mention my favorite characters (in order): Nick’s dad, Coach Steve and Lola Skumpy. All three had shining one-liners and moments that truly made me laugh out loud.

Even though the school fired Coach Steve last season, the writers found a way to bring him into every single episode — even if just for a few seconds, and possibly as a monkey. Plus, he got his own Queer Eye episode, where the gang got together to redecorate his home on the diaper barge and taught him how to stand up for himself.

This show seems to know exactly what you’re thinking and then say it for you in the most forward and crude way. It’s entertaining, disgusting, embarrassing and hilarious. The show continues to stay hip with the times, portraying middle schoolers going through puberty, trying to stay woke and, most of all, just trying to fit in.