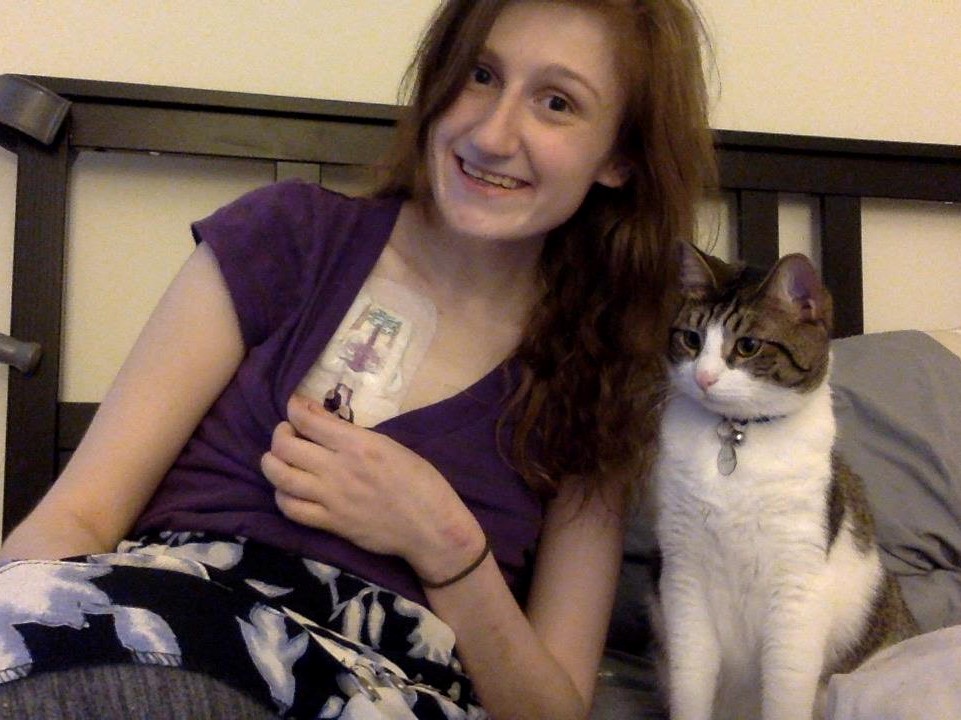 Katerina Showalter, a former University of Maryland student, died last month of complications from mitochondrial disease. She was 24. (Photo courtesy of Patchen Mortimer.)

As Katerina Showalter was preparing to leave for South Carolina to watch the solar eclipse in 2017, she knew she was going to run out of pain medication.

Two emergency room visits later, she and her boyfriend Patchen Mortimer had made it. Together, they watched Earth be engulfed by the moon’s shadow, soaking in the wonder of an astronomical event that would only happen once there for 375 years.

That’s the person Katerina was, her friends said: a resilient adventurer who wouldn’t let anything get in her way. Not her pain, not her illness, and definitely not a seven-hour car ride.

Showalter, a disability rights advocate, trivia master and former University of Maryland student, died last month at her home in Baltimore of complications from mitochondrial disease, a disorder that occurs when cells are unable to properly produce energy. She was 24.

Now, the people who loved her are reeling from her loss — and thinking back to the resounding impact she had on the campus over such a short period of time.

“She just bubbled with life and excitement, and anything she was passionate about she dove into,” said Mortimer, an alumnus of this university. “She was just endlessly fascinated with the world, with science, with weird facts, with anything ridiculous.”

When asked to describe his partner of more than five years, Mortimer thought of one word: “effervescent.” Her father, Charles Showalter, chose “articulate and brave.”

Showalter had a radio show on WMUC and was a devoted member of the university’s Jewish community. She would often have her friend Neel Kar push her wheelchair along the 20-minute walking route to Friday night Chabad dinners at the Jewish Student Center. Her faith, Mortimer said, was a source of great strength during her illness.

More than anything, though, Showalter was an avid advocate for people with disabilities.

Her dream was to create a Kickstarter to expose more of the community of people with disabilities to the therapeutic and recreational benefits of virtual reality. She had wanted to open up her home in Baltimore to other community members with disabilities so they could experience her Oculus virtual reality system, and she used her social media to spread the word about fundraisers for things like the United Mitochondrial Disease Foundation and Feeding Tube Awareness Week.

Just a year after starting at this university with a plan to study engineering, Showalter got sick. She spent long bouts in the hospital throughout the spring of 2014 before eventually being diagnosed with mitochondrial disease, and the next fall, she transferred to the University of Maryland, Baltimore County to be closer to Johns Hopkins Hospital.

When she got there, Mortimer said, she worked to get signs placed on the handicap bathroom stalls to remind those who are able-bodied who the stalls were for.

And while at this university, Showalter had an uncanny ability to make people feel at ease and provide comfort to friends who were struggling, Kar said.

Kar first met Showalter at a point in his life where he felt like a failure, he said. She befriended him, introduced him to Rocky Horror Picture Show, and slowly but surely helped him gain confidence. He came out as bisexual, embraced his gender fluidity and began living more fully.

“That simple moment has been hugely pivotal in my life,” he said, remembering the first time Showalter took him to see the show.

Years later, Kar joined the campus Rocky Horror Picture Show cast as Riff-Raff and Dr. Scott. Showalter played Trixie. Even today in Seattle, Kar still acts in the show — all thanks to Showalter.

“The most amazing, unbelievable thing about her, he said, “[was that] with everything she was going through, she still insisted upon caring more for the people in her life, to an extent, than about herself.”

Bryce Weisberger, Showalter’s friend since high school, remembers her similarly. Plus, she was “far and away the smartest person I’ve ever met,” he said — someone who could “kick anyone’s ass in trivia.”

Weisberger remembers bringing his friend to a family celebration. When she met his grandfather, the pair began spouting Civil War and World War II facts at each other, diving into a lively historical discussion.

But what Weisberger recalled most was Showalter’s ability to connect with the people she met. She took the enthusiasm around her, he said, and channeled it into connections that knew no bounds.

“[She knew how] to communicate,” he said. “To know what to know what language everyone else was speaking.”