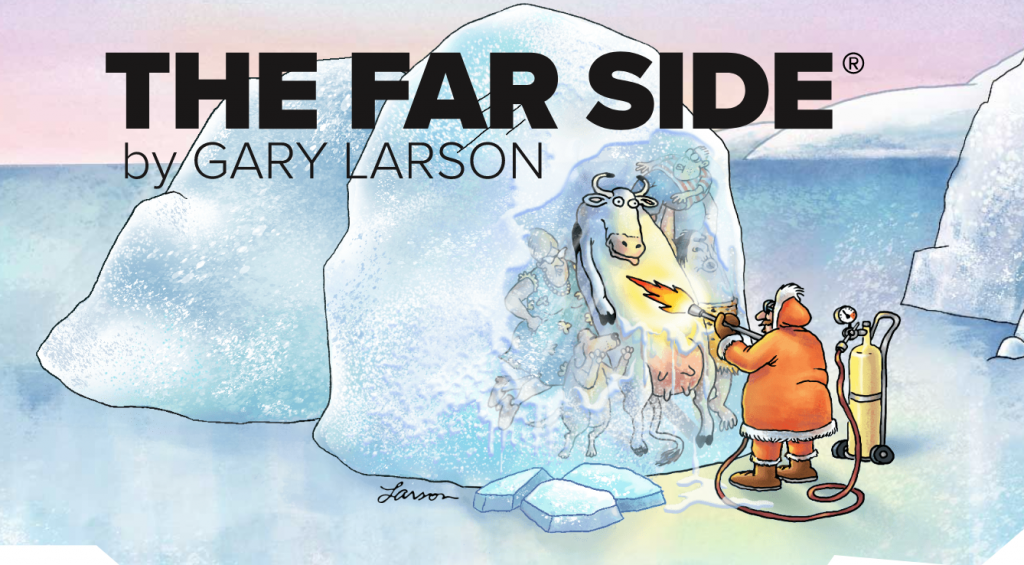 Reboots are terrible. It’s a rule of thumb that’s kept my expectations at an appropriate level for every would-be comeback story of something I enjoyed as a kid: Bill Nye, Full House, almost everything Disney has produced in the last five years.

So, when I saw Monday that The Far Side’s website updated for the first time in years, promising that “A new online era of The Far Side is coming,” my brain was flooded with questions: Will this be good? Will it kill the legacy of the original comic strip? Does Gary Larson still have it?

If you’re not like me (read: spent an inordinate amount of time reading comic strips when you were growing up), a different question is probably going through your head right now: What is a Far Side, and who is Gary Larson? Well, I’m here to tell you what’s what, and why I’m excited for this particular reboot.

The Far Side was a single-panel comic strip that ran through the ‘80s and ‘90s. Far Side comic strips were kind of a primitive (literally) meme: the humor came from the one-line captions that ran below the panel. Sometimes, they didn’t even have text — the implications were left for you to dwell on.

These bite-sized strips were perfect when they first ran, and they’re even better in an era when no one has an attention span. But what separates The Far Side from, say, Family Circus or similar one-panelers was its utter refusal to make any comment on the cultural moment, or human nature.

No, The Far Side lived up to its name; it was a trek into the oddness of the world we share. The punchline was never an individual’s actions or a subgroup — and when it was, it was an entirely fictional or arbitrary one. A Far Side strip from 1982 is no more or less funny than it is today. It didn’t age badly; it’s a strip independent of time.

This would be impossible without the bizarre mind-palace of the man behind the strip. Larson is a self-described environmentalist and lover of science who married an anthropologist. It follows that much of the Far Side’s humor came from personifying animals, or fictional creatures.

But moreover, Larson is a man who is not afraid to go absolutely absurd. He had a weird fixation on cows during the strip’s initial run, which gave us this dadaist masterpiece. There is no point to “Cow Tools” beyond the fact that Larson thought it would be funny to draw tools that a cow would make. He spent a solid page of his post-mortem book on the strip lamenting this.

He also hardly ever drew anyone with their eyes open, writing that people looked funnier with closed eyes, or at least glasses. If he was born twenty years later, Gary Larson would almost definitely be running an ironic Twitter account.

And, perhaps most encouragingly, he is a man of principle. He held out on digitizing the strip for decades before now — if you hadn’t noticed, most of the images from this very article are from scattershot corners of the internet. That’s because there is no digital archive; if you wanted to read a Far Side comic, you’d have to buy one of the dang books.

There’s really no point in the Far Side coming back now. The internet as a whole is no longer the cutesy place for hosting a webcomic that it used to be. Newspapers are dying; the strip itself has already racked up half a billion in revenue, as well as an eternal spot in paleontology and biology textbooks.

So, if The Far Side is coming back now, it has to be because Larson has something he really wants to say, right? It’s entirely possible that his first strip back will be some hackneyed shit like a cow claiming that it’s a human, with the caption being “BESSIE LOVES TRIGGERING THE LIBS.”

But Gary Larson’s body of work hasn’t given me a reason to doubt him yet. Still, until the proverbial (or literal, I guess?) ice thaws, I’ll have that fear in the back of my mind. Of course, no fear I have will ever be as bad as my anatidaephobia.