At 40, WMUC-FM outlives the staples of pop culture’s past 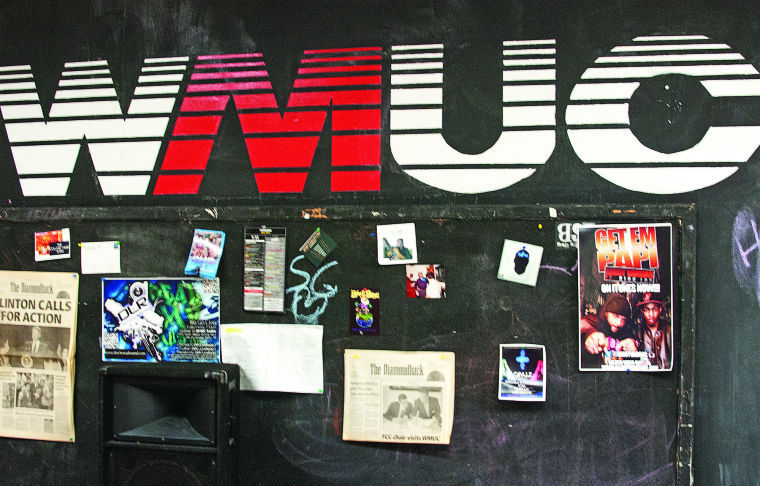 The main wall of WMUC waiting room exhibits its logo and different articles from its past.

In the age of Spotify and SiriusXM, it would be easy to assume that free-form college radio has gone the way of the dinosaur. After all, so many other things that were once staples of pop culture have met the same fate: VHS tapes, floppy disks, the Walkman.

But here at the University of Maryland, WMUC lives on despite its age.

The station, which sent out its first broadcasts as an AM station in 1948, celebrates its 40th anniversary on FM airwaves on Tuesday — even though the original broadcasts were cut after three days due to poor transmission quality. General manager Alexya Brown chalks up its longevity to the efforts of students who get involved.

“I’ve definitely seen this space become more activated and more responsive to what the community wants,” said Brown, a senior behavioral and community health major. “Whether they’re on the executive staff or if they’re DJs, being more active in the space … and being agents in the community to bring more people here.”

Patchen Mortimer, who started DJ’ing as a graduate student in 2000 and has hosted “The New Indie Canon” since 2008, echoed the importance of students taking ownership for the station’s success.

“The core of WMUC is that it is a student-run undergraduate station … and that is the way it should be,” Mortimer said. “We’ve had some really incredible general managers and board members really leading … so I think right now the station is in one of the best spots it’s ever been in.”

Since 1982, WMUC’s schedule has been entirely free-form, which means DJs set the music instead of program directors. But even before adopting the free-form practice, the station’s music selection was eclectic.

To Mortimer, that’s exactly the point: Anyone can curate their own music collection and listen to songs and albums of their choosing, but the value of college radio lies in trusting someone else to take you on a journey.

“Even with our tiny range,” Mortimer said, “you want to hope that there are still 14-year-olds out there who are scrolling around the band in the middle of the night and all of a sudden, they’re stumbling upon this station that’s unlike anything else they’ve heard.”

This university is the only college in the area with a free-form FM broadcast — WAMU operates out of American University, but functions as Washington, D.C.’s NPR member station. Several other schools have moved to a streaming-only format, and Howard University’s WHUR operates as a commercial station — but that status was in jeopardy not too long ago.

Baltimore NPR member station WYPR, which also occupies the 88.1 MHz FM frequency, sought to expand its reach far enough south that it could have interfered with WMUC’s signal — or effectively wiped the station off the dial altogether. But while WMUC has clung fiercely to its airspace at 88.1, former general manager Jane Lyons thinks that the frequency isn’t necessarily an end-all, be-all.

“There’s a lot of love for the frequency that we’ve been on for 40 years,” Lyons said. “But I think that the more important thing is that we are on FM, and that people can hear us. So if we can still be on FM and have more people be able to hear us, then that should be the goal.”

To that end, the station has added an exclusively digital channel and mobile app that allows listeners to tune in and stream either channel from their devices. That evolution has expanded its programming space to 24 hours a day, which means more slots for aspiring DJs like Peter Rosenberg, the former Terp who parlayed his time spinning hip-hop records on WMUC into a career as a host on ESPN Radio and New York’s Hot 97.

It also means adjusting how DJs interact with their listeners.

WMUC’s programming is not limited to music, though. Sundays at 6 p.m., the schedule makes way for Third Rail Radio, the station’s weekly live show. Since 1996, the top floor of the South Campus Dining Hall has hosted artists that have gone on to make it big: Elliott Smith, Mitski, Future Islands, The Get Up Kids, to name a few.

At the end of the day, Brown, Lyons and Mortimer all cited one thing as the guiding light of the station: providing a community for its staff.

“It’s a great way to find connection, especially when you’re a freshman or sophomore,” Mortimer said. “This can be a big university where it’s easy to get lost. And WMUC provides that community.”

That is especially necessary, Lyons said, in the wake of the closing of the Maryland Food Co-op in May. With one less university cultural institution in place, students feel the onus is on other ones, like WMUC, to keep giving a home to people who want to branch out and be creative. They might even learn something they weren’t expecting.

“It was important for the social aspects, but also for me figuring out what my interests and skills were,” said Lyons, who now works for a nonprofit in D.C. “After being general manager, I know that being in a management and leadership position is something that I’m interested in in the future. So that was super, super valuable experience.”

Mortimer, who is now an advertising copywriter in Baltimore, agreed.

“DJ’ing has given me some of the most marketable skills I’ve ever had,” he said. “But you don’t get into it because of that. It’s the accidental resume builder.”

She did, however, want to leave a message for the next 40 years of listeners.

“There’s always a surprise if you tune in,” she said.