Overconsumption will destroy our planet. The Green New Deal must fight it. 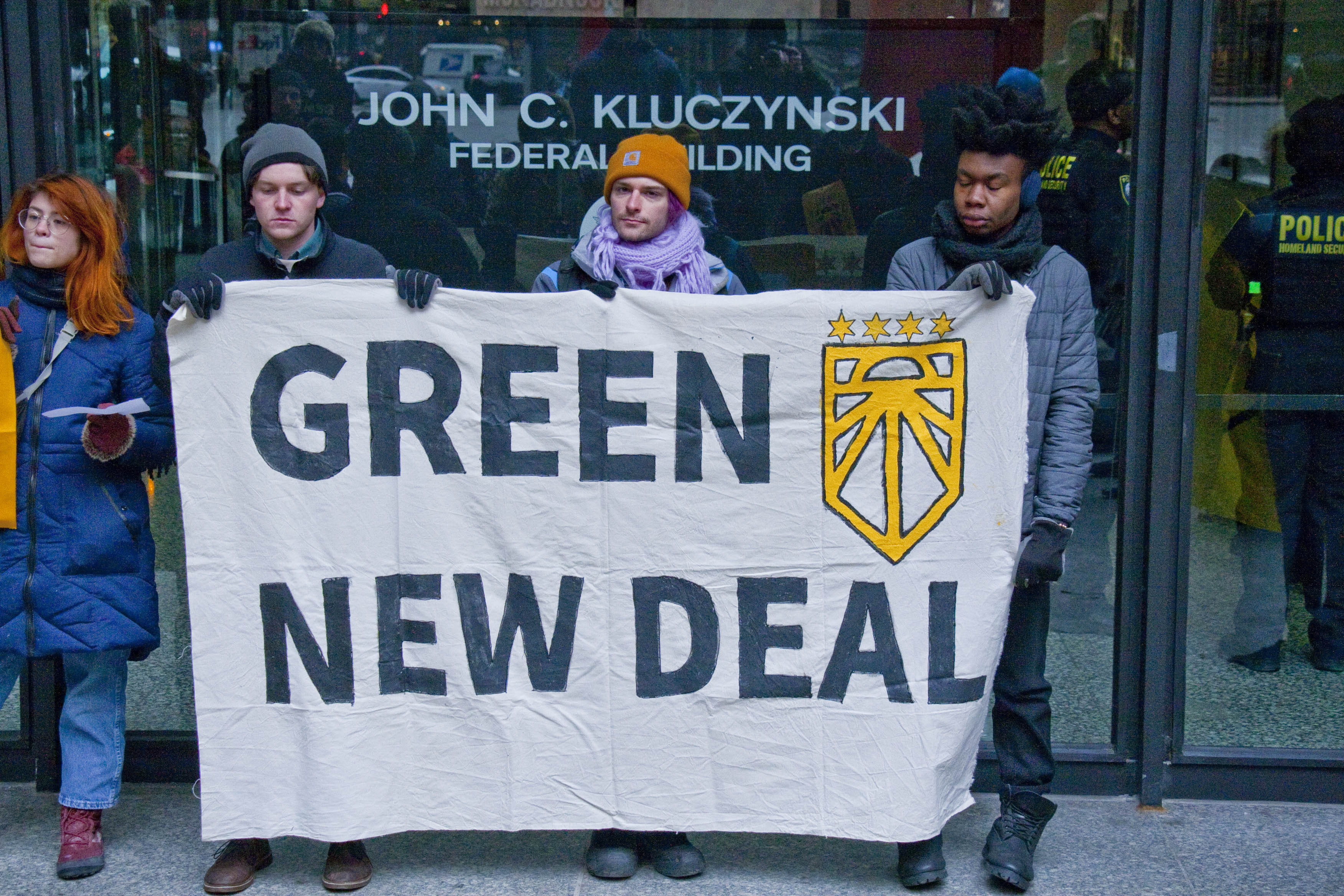 Members of the Sunrise Movement rally in Chicago in support of the Green New Deal. Photo courtesy of Charles Edward Miller.

The Green New Deal is the first mainstream American climate proposal to grapple with the true scope of the climate crisis. The activists surrounding it — many of whom are teenagers or younger — possess a better sense of how political change happens than most veteran Democratic politicians or operatives.

So when I offer some concerns about the Green New Deal framework, it is in the hope of greater clarity, coming from someone who genuinely admires the work of Green New Deal proponents. The situation is bleak. Maryland’s summers are set to feel like Mississippi’s in just decades. Many American counties have already passed the two degree warming threshold — the critical point for irreparable damage outlined in the 2015 Paris Accords. The Amazon rainforest is on fire. We have to get this right.

But I worry that the Green New Deal might be misdiagnosing the underlying climate problem, applying an approach designed to combat underconsumption to a crisis of overproduction and overconsumption. The heart of the crisis is the overuse of natural resources, most especially fossil fuels. A sustainable annual level of natural resource consumption is around 50 billion metric tons, according to Foreign Policy. Human beings have been using more than that quantity since 2000. So, naturally, a solution to the climate crisis requires somehow reducing consumption of these resources — again, with fossil fuels being the primary, but not sole, object of concern.

The Green New Deal’s approach can be described as eco-Keynesian. Its proponents hearken back to the most prominent application of Keynesian economics in American history: the original New Deal, when the federal government pumped massive amounts of cash into the economy to increase consumption. The Green New Deal resolution calls for an economic mobilization on par with World War II, going back to a time when government spending kicked the economy into overdrive.

Keynesian economics, though, seems like a solution to a climate problem that doesn’t really exist. As political theorist Alyssa Battistoni wrote in Jacobin, “If overconsumption is actually the problem, we can’t fix it by consuming more, however eco-certified the products.”

An environmental policy approach that centers the problem of natural resource overconsumption doesn’t preclude significant government expenditures. Indeed, the transition to sustainable energy and food production — both at home and abroad — will certainly require a robust public role. But submitting to the prerogative of endless economic expansion is incompatible with a just transition to a green economy. That the climate-conscious branch of the left takes inspiration from historical efforts to catalyze economic growth is concerning — sluggish growth due to insufficient consumption is simply not the problem.

Some may protest that such a wary stance toward growth is overly pessimistic. If we can decouple economic expansion from the use of natural resources, why can’t growth continue at the same pace? The prospect of “green growth” is appealing, but recent research suggests it may not be possible. London School of Economics anthropologist Jason Hickel has summarized three recent studies — one of which comes from the United Nations’ Environmental Program — that model future natural resource consumption, while assuming extraordinarily high levels of carbon pricing and dramatic advancements in resource-use efficiency.

“We might be able to produce cars and iPhones and skyscrapers more efficiently,” Hickel acknowledges, “but we can’t produce them out of thin air.”

So what would a climate approach that centers the problem of overproduction and overconsumption actually look like? For one thing, it certainly should not mean shaming people for wanting some basic share in the prosperity of their society. For too long, environmentalism has been defined by a moralized asceticism that often targets working class and poor people.

A resource-use reduction policy would have to start with massive public expenditures to facilitate the transition to more sustainable forms of transportation, agriculture and energy. From there, as Battistoni argues, it should emphasize work reductions. When people work fewer hours, less is produced and less is consumed. Economists David Rosnick and Mark Weisbrot found that the United States could achieve a 20 percent reduction in energy consumption by lengthening vacation time to six weeks and shrinking the work week to 35 hours.

Such work reductions must be humane. That means supporting unionization efforts, raising hourly wages, compressing existing income disparities and instituting a universal basic income. Social democratic reforms are a basic prerequisite for any just growth slowdown. If the economic pie will be growing more slowly, it must be shared equitably, both within individual nations and between the global north and the global south.

Additionally, the work we do engage in must be less resource-intensive. Work in service, care, education and leisure sectors will become more central; manufacturing will become less important. Battistoni has also suggested paying individuals for refraining from engaging in environmentally damaging activities.

This is all just a sketch of what a non-Keynesian climate approach might look like. It may well be a harder sell than the Green New Deal. But as Sunrise Movement activists have wisely argued, we must push for what the climate crisis actually demands — not just what seems politically feasible in the moment.