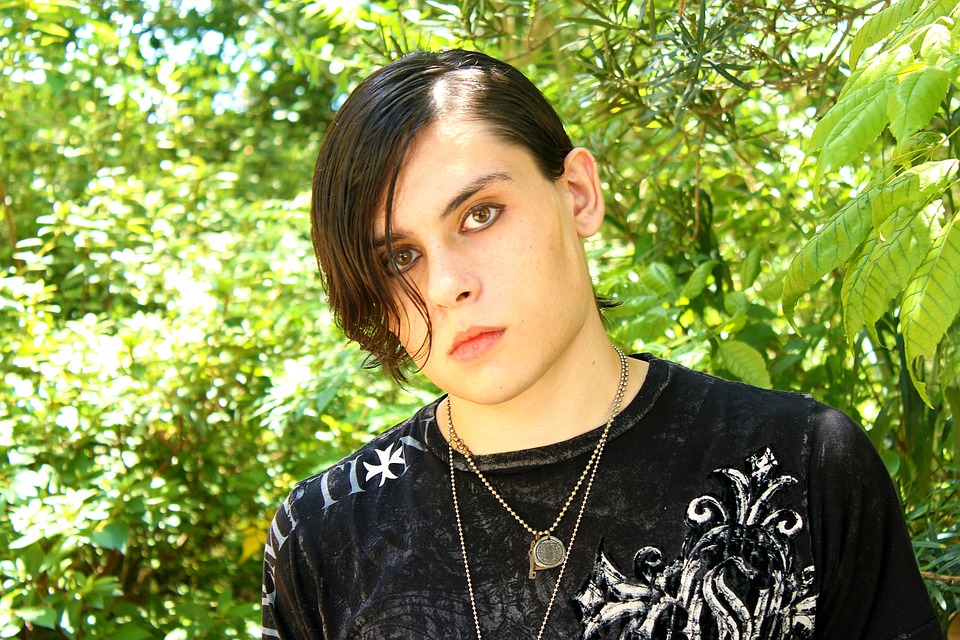 I’ve been slow to notice the changing tides of social media. Most of all, I realize I’ve been sleeping on TikTok and the fast-paced performance art communities catching fame there like lightning, galvanizing the next generation of internet subcultures. Among the most striking are e-girls, a loose descriptor for women who apply a certain alternative aesthetic to their online persona, marked by a lot of blush, eyeliner hearts and hair dye in unnatural colors. It’s a multilayered performance: in part an ironic inversion of the glamour of traditional Instagram influencers, in part an acknowledgement there’s an audience that wants to see that.

Branching off from the e-girl community is a smaller subculture of e-boys. They mirror the e-girl style, but they tend to look more brooding, like rebellious sons of mimes in their striped shirts and heavy makeup. It’s an interesting evolution in the ways men express themselves online — at once a mirror of the female trend but also a less emotionally burdensome way for men to channel their feelings and receive validation. It’s a healthy and socially progressive trend, and a sign of progress in male communities.

E-boys recall and reinvent the trend of softboys, which were progressive in concept: Men should be allowed to be soft! Create communities based in sensitivity! But it was an absolute drag in practice because they were so defined by interactions with women. They were emotionally draining and manipulative, and they were proud of holding traditionally feminine traits without doing the work to be a whole person. E-boys are better because instead of being what many men think is the sincerest expression of their tender heart, they’re bound up in art. E-boys are meant to be seen and considered appealing, but the validation is in the view count — not the praise and labor of some beleaguered individual. By depersonalizing the performance, men can figure out an identity that’s interesting and not terrible, without any collateral damage.

And it’s clear that e-boys are following the trail blazed by e-girls. In mirroring their aesthetics, these men get to recreate themselves in models not defined by society’s image of a proper man, but rather an extension of what a certain audience wants from women. In that space, they can’t avoid learning from and listening to women — the e-girls did it first, and they’re the model for cool. It creates a good space for collaboration and an easy way for men to learn empathy, pushing back on the failings of traditional masculinity.

There’s so much freedom and so much accessibility that allows e-boys to blur the lines in a way that’s impossible for traditional social media personalities. An Instagram influencer usually can’t maintain an expensive life of exhilaration off camera because the persona is purely about the extraordinary. But an e-boy is just a man dressing kind of extravagantly, thinking wistful things, listening to nightcore. He can exist outside the photograph because it’s easy and achievable, and it’s just about what he thinks looks cool. In that way, an e-boy can express who he really is while still shielding himself with the excuse that it’s all ironic.

Ultimately, these subcultures exist as long as there’s an audience for them, and that’s the easily exploitative model all social media forms profit from. The e-girl community is electric because it is so aware of this commodification, so these women have fun with it. That e-boys learn from this model to not only be a certain type of performer but also a more empathetic and authentic person is a positive sign that the relationship between audience and entertainer, poster and viewer isn’t purely a bad extension of modern society. It may seem like a strange aesthetic at first glance, but the trend is having a positive influence on those who are participating.