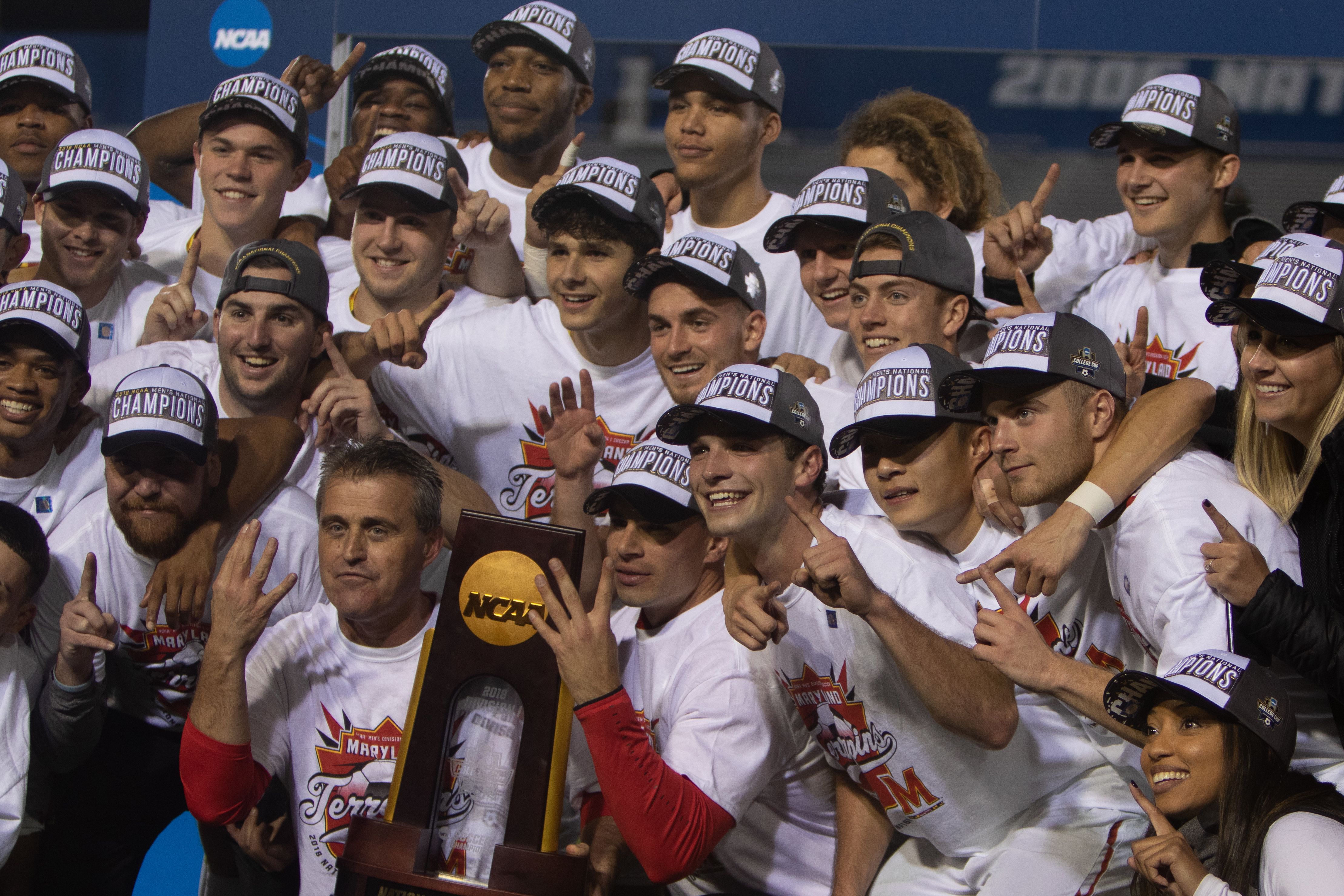 Coach Sasho Cirovski and the Terps pose with the trophy after their 1-0 win over Akron in the NCAA championship game at Harder Stadium in Santa Barbara, California, on Dec. 9, 2018. (Courtesy of Angelica Banks/Daily Nexus)

Maryland men’s soccer is no longer an underdog. The team, fresh off the program’s fourth national title, begins their title defense next Thursday against the South Florida Bulls.

The hunters have become the hunted as the Terps come into the 2019 season as the No. 1 team in the county according to the latest United Soccer Coaches poll.

We start the season at number one! #Excellence

Last season’s run was memorable and historic, but do the Terps have it in them to repeat? Well, it’s not out of the cards.

Maryland’s schedule is difficult, with six matches against ranked opponents. Fortunately, they have the benefit of playing four of those at Ludwig Field, one of the best environments in college soccer according to NCAA.com.

The Terps host both No. 2 Indiana and No. 3 Akron, in rematches of last year’s College Cup. Maryland beat Akron 1-0 in the national championship after beating Indiana 2-0 in the semifinals.

The schedule starts out tough, with three of their first four matches against No. 12 Virginia, UCLA and aforementioned Akron. The Terps and Cavaliers will once again face off at Audi Field in Washington D.C., where they drew 0-0 last season.

The Maryland-UCLA rivalry has grown in the last few years and the Terps are looking for revenge as the Bruins defeated them 1-0 at Ludwig Field last season.

The schedule doesn’t heat up until Big Ten play starts, with a road match at Wisconsin. Arguably the most brutal part of the Big Ten schedule is a three-match stretch in October against No. 7 Michigan State, No. 13 Georgetown and No. 2 Indiana.

East Lansing hasn’t fared kindly for the Terps, who have yet to win on the road v. the Spartans. Maryland is 1-2-2 against Michigan State in the regular season since joining the Big Ten, drawing twice in East Lansing and losing twice at home. This season might be a different story.

Maryland and Georgetown have played it close in recent years, but the Terps have the overwhelming 29-3-2 all-time edge against the Hoyas.

Indiana has historically been a matchup of ties, as the Terps have a losing 3-4-7 record against the Hoosiers. Despite the recent edge in the College Cup, half of their matchups have ended in a draw. Expect something very similar this season, despite Maryland’s home-field advantage.

The Terps end the season against No. 24 Michigan, a tough conference match which will probably have conference tournament implications written into it. Maryland is hosting the Big Ten Tournament this season, so anything might happen.

So, can Maryland repeat? Yes, but it’s going to be a long road to December and the College Cup.