Marianne Williamson is not the answer to Trump 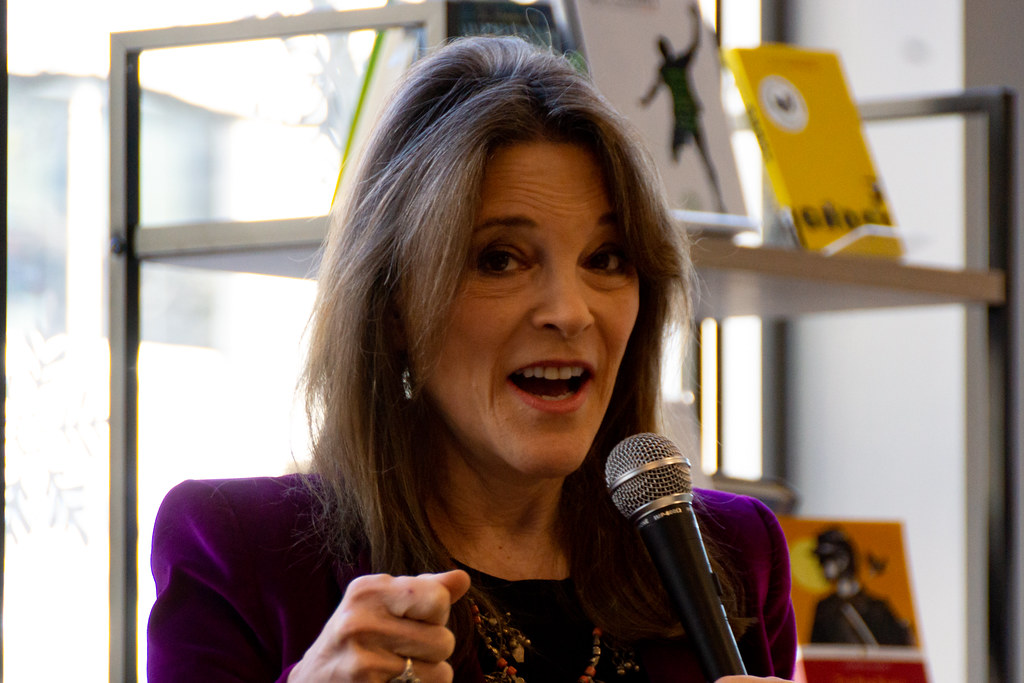 Since the first televised presidential debate between John F. Kennedy and Richard Nixon in 1960, the debates have been trending toward spectacle and away from substance. The understated set and modest wood furnishings of Kennedy versus Nixon have given way to flashy red and blue lighting and sleek graphics that introduce the candidates like they’re boxers in a title fight.

With the (literal) stage set for entertainment and high ratings for the networks that air the debates, candidates fuel the event, dishing out snappy one-liners and heavily rehearsed quips in exchange for coveted air-time and mass Google searches of their names. The media and the candidates are in harmony, each dependent on the other for attention.

This environment is perfect for a candidate like Marianne Williamson, who has broken out of total obscurity thanks to the first two debates — but her rise in publicity has come with some undue praise and misleading characterizations of her candidacy.

Williamson is a unique candidate. She’s a self-help author with a knack for drawing celebrities like Oprah Winfrey and Kim Kardashian into her fanbase. In her books and public appearances, she leans heavily on vague ideas of spirituality and applies a kind of New Age philosophy to politics. She also has a troubling history of skepticism toward vaccines and anti-depressants.

At the first debate, Williamson leapt into the spotlight with a strange yet attention-grabbing performance. She referred to the prime minister of New Zealand as “girlfriend” and stoically told an imaginary Donald Trump, “You have harnessed fear for political purposes and only love can cast that out … I’m going to harness love for political purposes. I will meet you on that field and, sir, I will win.”

But Williamson really stood out in the second debate, receiving the most Google searches of any candidate. She received some deserved praise in the media for her stances on issues like reparations for slavery, money in politics and college affordability.

Perhaps the strangest source of praise for Williamson came from New York Times columnist David Brooks. This was an unlikely pairing, considering Brooks’ Buckley-esque conservative politics. In his column last Thursday, titled “Marianne Williamson Knows How to Beat Trump,” he admired Williamson for distancing herself from secularism and wrote that she was right to say that policy proposals and efforts to redistribute wealth alone won’t “deal with this dark psychic force of the collectivized hatred that this president is bringing up in this country.”

Williamson’s distaste for the intricacies of policy is a weakness, not a strength. This isn’t to say that all candidates should be single-mindedly fixated on elaborate policy proposals. But mystical talk of the nation’s psyche and empty moralizing about love do little to solve the country’s problems. Williamson takes sensible, egalitarian positions on a number of issues, but proving that ambitious policies such as reparations and free college are feasible is crucial to sustaining the rise of the long-dormant American left. And you can’t demonstrate the viability of these policies without getting your hands dirty with some number crunching.

Despite Brooks’ argument, there isn’t some magical rhetorical element that candidates more focused on policy are missing. Williamson, to her credit, is mostly in line with the positions of more popular left-leaning candidates Elizabeth Warren and Bernie Sanders, but it’s not as if her spirituality is the secret ingredient needed to defeat Donald Trump. Warren, for one, is in the top tier of candidates despite her reputation as a wonk. However certain the pundits appear, there is no crystal ball telling them the Democrats are doomed without an appeal to spirituality or a more emotional message.

In the same vein, the pervasive comparisons of Williamson to Trump are misleading. They cast her as a kind of perfect foil to Trump, a political newbie appealing to voters on the same emotional level but for good rather than evil. This is a particularly noxious brand of speculation in the political media that is distorting many people’s views on why Trump won in 2016 and how he could be beaten in 2020.

As Jenni Avens said on NPR, “It really seems to me that [Williamson] wants [Democratic candidates] to start appealing to … the emotions of the American people the way, frankly, that Trump has.” And as Sonia Saraiya noted in Vanity Fair, she’s been described as “the left’s Donald Trump.” Whether or not the comparison is meant as optimism or a criticism, the parallel is one that could leave people believing Williamson is the answer to Trump, for better or worse.

But as political science research has shown in study after study, it was Trump’s direct, racist appeals — not his general “rule-breaking unhingedness” or voters’ economic anxiety — that connected him to a resentful white base. He activated a deeply racist segment of society that isn’t likely to be won over by a different unorthodox candidate minus the racial dog whistling.

Trump can still certainly be beaten, but it’s unlikely that Marianne Williamson-style rhetoric will be the Democrats’ secret weapon.

Zachary Jablow, opinion editor, is a rising junior economics and government and politics major. He can be reached at zachjablow@gmail.com.