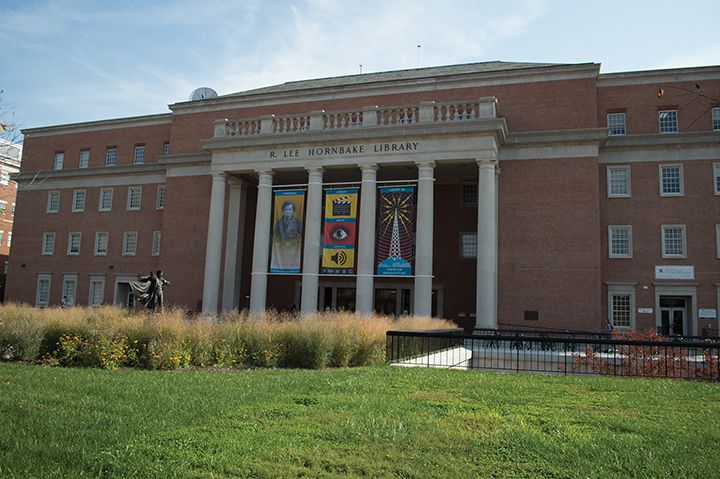 Hornbake Library will dedicate some of its downstairs space to the expanding iSchool in the fall. (File Photo/The Diamondback)

The University of Maryland’s Hornbake Library is planned to lose student study space this fall.

In August, the university’s information studies college is set to take over the downstairs portion of the library behind the set of doors, said Gary White, associate dean for public services at University Libraries.

The coming academic year will be something of a “transition phase” for the space, White said, as the college, also known as the iSchool, remodels it.

The rapidly-expanding iSchool will use this area as office and work space for its faculty and design collaboration space for its students, so it will no longer be open to the general student body. The area on the lower floor that isn’t behind the doors will remain open, as will the rest of the library.

“We don’t expect to be locking the doors and keeping people out,” said iSchool dean Keith Marzullo.

When the iSchool began an undergraduate program in the fall of 2016, it had just 92 students, but as of spring 2019, it had 843, according to the dean’s assistant, Joan Olive Cole. As a result, the college needed to hire additional faculty members, bringing about the need for more office space.

University Libraries was already looking to relocate LMS to McKeldin, he said, since that library is often open for 24 hours.

The Maryland Institute for Technology in the Humanities, which also resides in Hornbake’s lower levels, will remain, White said, as will the nearby filming studio. The classrooms in that portion of Hornbake will host classes as planned for the fall semester, he added.

The student study space lost from the construction will eventually be offset by changes to McKeldin’s fifth floor, Whitesc said.

All bookshelves on McKeldin’s fifth floor will be removed, and processes to relocate the books to upper floors or the Severn Library, the university’s book warehouse about a mile from campus, have already begun.

The area will also need to be carpeted during a break, he said, most likely the break between the fall and spring semesters, before furniture can be added.

University Libraries is also planning to make several small group study carrels on McKeldin’s seventh floor available for students to reserve. White said he hopes this will reduce the strain on the large study rooms on the library’s lower floors.