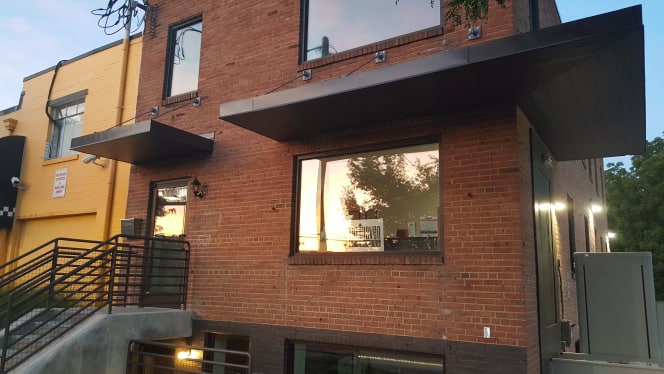 The Haven's outpatient center is located on Route 1 next to ZIPS Dry Cleaners. (Nora Eckert/For The Diamondback)

On a typical school day, Jenn Schultz would commute one hour each way in her drive to the University of Maryland from her home just outside of Annapolis. The journalism major wanted to live on campus, but she couldn’t do so without proper accommodations.

Schultz had worked hard to get clean when she was 17, and she didn’t want to risk her recovery by living in close quarters with students who drank or did drugs.

So when she heard The Haven at College — a sober-living community intended to help students struggling with substance abuse — was coming to College Park, she was “ecstatic.” It was the kind of resource the recent alumna had always yearned for as a student.

The Haven provides services for college-age students, such as counseling and therapy, and hosts events, like game nights. And now, they have an outpatient center in the city for students who are struggling with addiction or in recovery.

While The Haven’s existing housing at Terrapin Row has been operating as the central location for student treatment and support over the last year, the outpatient center will be the new home for their “intensive outpatient program,” which centers on licensed clinicians providing therapeutic support for students.

“I looked for housing that would be safe and supportive … and there was nothing,” Schultz said. “I didn’t get the campus experience I wanted because it didn’t exist.”

[Read more: After months of delays, College Park addiction treatment clinic to open in May]

The Haven had the grand opening of its College Park outpatient center on June 4, after months of delays due to permit and licensing issues. The facility, located on Route 1 next to ZIPS Dry Cleaners, was originally supposed to open in the fall.

Sophie Pyne, The Haven’s senior university account director, said the University Health Center approached their organization in March 2016 to inquire about opening a location on campus. In a 2018 press release, health director David McBride said he was excited about the partnership after visiting one of The Haven’s centers in Philadelphia.

With the summer months starting up, Pyne said this is the time when some students often come to terms with their addiction, which can become more pronounced during the ends of semesters.

The break brings downtime and flexibility that enables students to recognize addiction and get additional support, Pyne said.

“Maybe it’s not being identified until more high-stress situations, such as when finals are coming up … so I think a lot of students try to sort of push their way through the semester and then will get help during the breaks,” she said.

Schultz, who is now the outreach representative and peer ambassador for the College Park location, said she can certainly relate. Some of the most difficult times for her after getting sober were stressful periods or heavy-drinking holidays such as Halloween, she said. In these situations, she just wanted someone to talk to who could understand what she was going through.

That’s one of the benefits of The Haven, she said. Many of the employees formerly struggled with addiction and understand the journey many of their clients have been through.

“There’s a relatability there that’s hard to find anywhere else,” said Schultz. “The therapeutic value of one addict helping another. There’s nothing like it.”

It’s one reason Mel Merritt, the house manager and community leader at The Haven residence at Terrapin Row, gets so much fulfillment from her job. Merritt didn’t realize she was struggling with addiction until she left this university.

Now, after several very difficult years away, she is back to finish her degree in environmental science and policy and to make a positive impact as a mentor for other students.

“The hope for The Haven being here at the University of Maryland is to interrupt addiction or interrupt substance abuse,” Merritt said. “The hope, at least for me, is to be able to share my experience with other students, so they don’t have to go down that long path and possibly never come back to school.”

This environment can also help students shed any shame they have about the disease, Pyne said, adding that The Haven is motivated to eliminate the stigmas surrounding addiction and encourage students to seek help when they need it.

Already existing student groups, such as Terps for Recovery, welcome The Haven’s presence. The organization’s president, Alexander Forde, a doctoral student in the computer, mathematical and natural sciences college, said he thinks collaborating with The Haven will only bolster the success of both organizations.

“It’s really joining forces on that side of things and having fun, sober activities where people can be part of a community,” Forde said. “Everybody can agree. We want to do anything to help people live purposeful, meaningful lives, and to stay alive. We all have that goal.”

From Schultz’s perspective, the College Park community has seen many positive changes since she was a student, and the opening of The Haven is just another step in the right direction.

“Our community surrounding recovery in College Park is stronger than ever,” she said.

CORRECTION: Due to a reporting error, a previous version of this article and its headline incorrectly referred to The Haven’s new outpatient facility as housing. This story has been updated.