We should all celebrate Pride Month. Here’s how to do so respectfully. 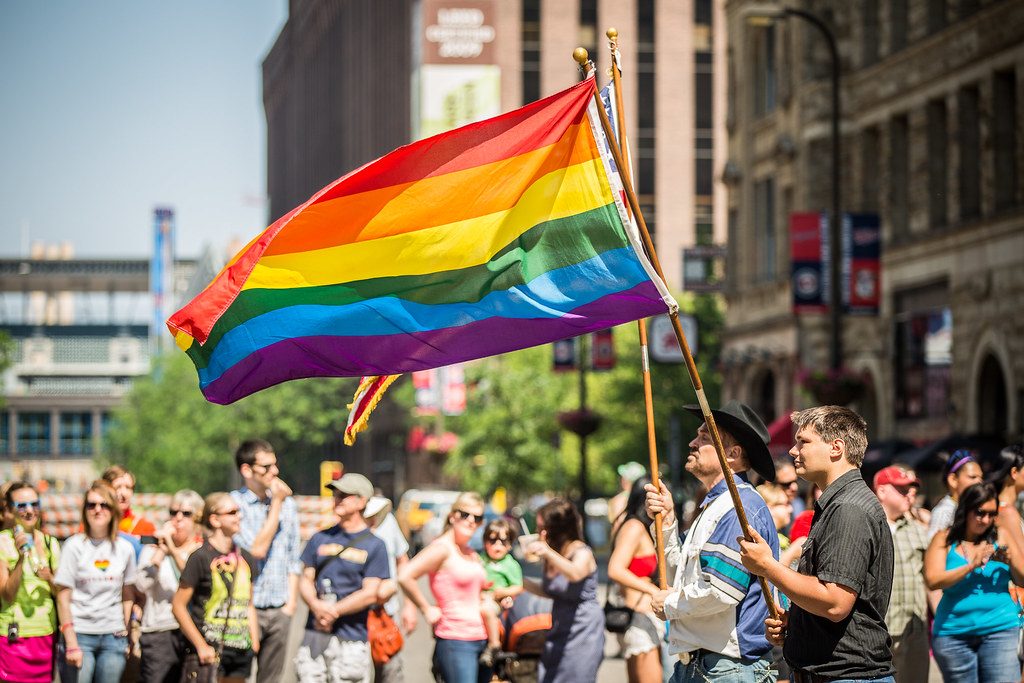 The 2013 Pride Parade in Minneapolis, Minnesota. Photo via Flickr.

As you (hopefully) know, June is LGBTQ+ Pride Month. It’s the month to celebrate queer culture and people, but it’s also a time to recognize the difficult history of oppression and pain the LGBTQ+ community has faced. While Pride Month should be open to all who want to join, we all need to be aware of how to respectfully participate, check our privilege and be supportive of the many battles that our community still has to fight. Here are some things that both queer and non-queer people can do to respectfully celebrate Pride.

First, be aware of what causes you’re supporting when you are making decisions as a consumer. Many queer people don’t want to see corporations at Pride. Plenty of brands capitalize on Pride Month, releasing rainbow product lines that often have no direct connection to the LGBTQ+ community. On the other hand, brands such as IKEA, Converse and ASOS all have Pride collections that give to LGBTQ+ organizations like the Human Rights Campaign or GLAAD.

As consumers, it’s important to know where our money is going. It may feel like a company’s overarching beliefs aren’t relevant to your business with them. But every time you spend money on a Chick-fil-A meal, it might be used to fund hateful anti-LGBTQ+ groups. Instead, consider buying an IKEA Pride bag, because 100 percent of the cost gets donated to the Human Rights Campaign’s educational programs for the LGBTQ+ community.

It’s also important to understand the history of the social movements that have impacted the LGBTQ+ people. This is especially timely given that this year marks the 50th anniversary of the Stonewall Riots, the violent demonstrations in 1969 that helped propel the LGBTQ+ rights movement. Anyone participating in Pride, queer or not, should understand that it represents much more than colorful parades and photo-ops.

We should recognize that the Stonewall Riots were started and led by some of the most marginalized members of the LGBTQ+ community, namely transgender women of color such as Marsha P. Johnson and Sylvia Rivera. Participants of Pride should also acknowledge that the violence that police forces have historically inflicted upon the LGBTQ+ community has, understandably, led to some Pride parades banning uniformed police officers. While you may not agree with this decision, a responsible participant of Pride month must grasp the history of hurt and hate behind it.

Next, as cheesy as it sounds, we must all recognize that Pride is intersectional. Pride is not just to celebrate the struggles and victories of white, cis queer people — it should support those in the LGBTQ+ community who are oppressed because of other facets of their identity as well, such as people of color and religious minorities. The LGBTQ+ community is hugely diverse, and we should treat it as such.

While the non-discrimination protections of the Equality Act are important for our community, LGBTQ+ people and allies have to recognize that members of our community are also affected by issues not as directly linked to the queer community such as poorly-funded welfare programs, lack of access to affordable health care and immigration reform.

Finally, Pride participants should know there is so much left to be done. We have made huge strides since Stonewall, but far too many members of the LGBTQ+ community are still at heightened risk of sexual violence, discrimination in the workplace, homelessness and other issues.

Ultimately, as consumers and participants of Pride Month and all it has to offer, I urge you to make ethical and well-informed decisions. It is a time to celebrate, but through that celebration I hope you understand all the LGBTQ+ community has felt: loss, pain, fear, anger, joy, hope, and, of course, pride.