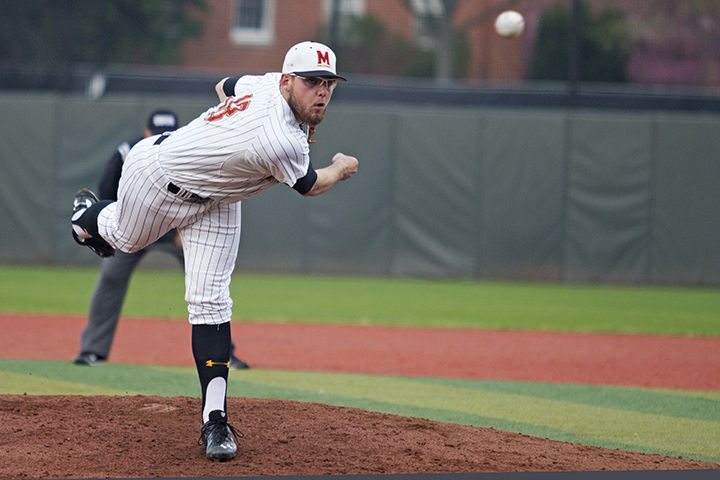 Pitcher Mike Shawaryn throws a pitch during the Terps' 10-1 win over Iowa at Bob "Turtle" Smith Stadium on April 10, 2015.

Former Maryland Terrapins pitcher Mike Shawaryn was called up to the Major Leagues by the Boston Red Sox on Thursday. This marked the first time that Shawaryn has been called up to a Major League roster, having been in the minor leagues since being drafted in 2016.

Prior to tonight’s game, the #RedSox placed RHP Hector Velázquez on the 10-day injured list with a low back strain.

To fill Velázquez’s spot on the 25-man roster, the club selected RHP Mike Shawaryn from Triple-A Pawtucket. The club’s 40-man roster is now at 40.

While at Maryland, Shawaryn broke several school records across his three seasons. Shawaryn holds the school records for career wins (30), strikeouts (307) and innings pitched (307.1), along with the single-season records in wins and strikeouts, as he racked up 13 and 138, respectively, in 2015.

Shawaryn was also a 2015 first-team All-Big Ten selection and was named Big Ten Pitcher of the Week five times, among other honors.

Before being brought up Thursday, Shawaryn had a solid start to his season in Pawtucket, going 1-2 with a 3.72 ERA across 10 starts.

His debut had to wait, though, as last night’s scheduled game between the Red Sox and the Yankees was postponed until August 3.