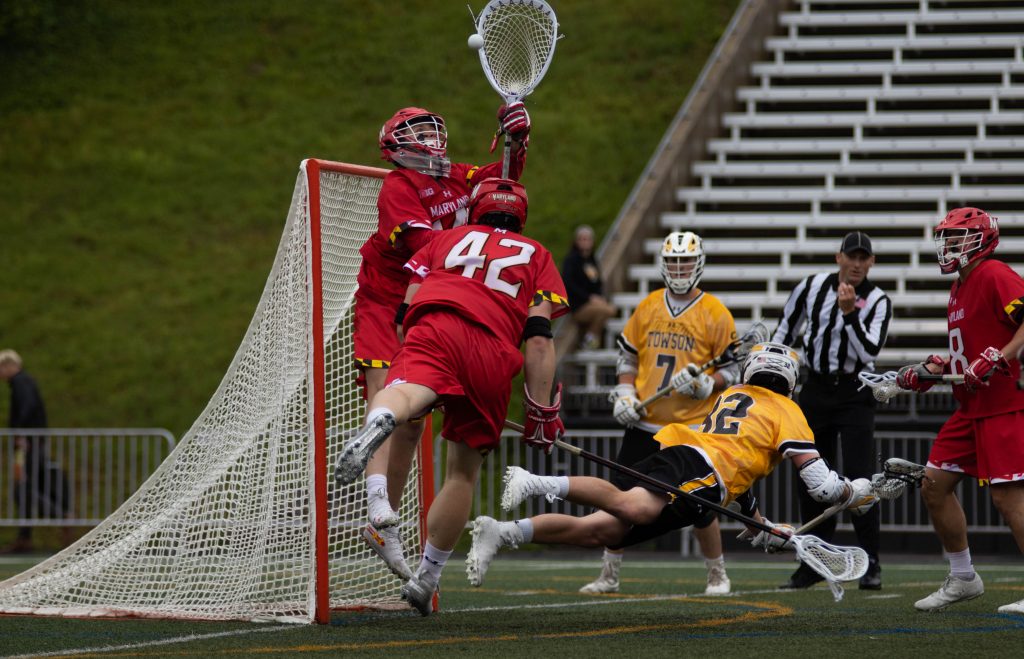 Goalkeeper Danny Dolan rises for a save in Maryland men's lacrosse's 14-13 win over Towson on May 12, 2019 in the NCAA tournament. (Julia Nikhinson/The Diamondback)

Maryland men’s lacrosse midfielder Will Snider lingered dejectedly on the sideline as his teammates gathered around goalkeeper Danny Dolan. Their season had just abruptly ended, losing 13-12 in overtime to Virginia in the quarterfinals of the NCAA tournament.

In Snider’s prior three trips to the quarterfinals, the senior and his team were quick to pour onto the field to celebrate a championship weekend berth. But against the Cavaliers, heartbreak set in as his Maryland career came to a close in agonizing fashion.

Before the defeat, the Terps responded to several moments of adversity to remain one of the nation’s top teams for nearly the entire season. But Maryland couldn’t find the answer for a furious Virginia rally — and a controversial goal call — and fell short of reaching Memorial Day weekend for the first time since 2013.

“It’s tough to go out like that,” attackman Jared Bernhardt said. “Biggest thing is, we just kept being relentless the whole time.”

That relentlessness surfaced at various times during the year, starting with the Terps bout against Richmond in their second game of the year.

Maryland took a six-goal lead heading into the fourth quarter and appeared easily on its way to securing a 2-0 record. But the Terps couldn’t squash the Spiders and allowed five consecutive goals.

As the home team clung to a 10-9 lead with two minutes to play in College Park, faceoff specialist Austin Henningsen secured possession at the dot to help Maryland escape with the win.

“Certainly not the way we wanted to finish the game,” coach John Tillman said after the game Feb. 9. “A lot of teachable moments, but a lot of good things.”

One week later, the Terps had their first road game of the season and once again squandered a fourth quarter lead. Penn had stormed back from a three-goal deficit in the final regulation period to take a 12-11 lead. Maryland needed a late goal to even out.

With less than 15 seconds remaining, Tillman’s attack unit had a chance to steal the win, but instead turned the ball over. The Quakers quickly took the ball the length of the field in transition, providing defender Kyle Thornton with a one-on-one opportunity against Dolan.

The senior goalkeeper, who became a starter for the first time in his Maryand career this season, made an unlikely save with five seconds remaining. Then midfielder Roman Puglise won the game in overtime for the team’s third straight victory to start the season.

“Just seeing [Dolan] make that save, it’s just kind of a sigh of relief, but at the same time it’s a newfound hope,” Puglise said. “I think from the moment forward, we knew that he made that save, we’re winning that game.”

The winning streak was extended to five games before the team traveled to South Bend, Indiana, to play Notre Dame on March 3. After the game was moved inside because of weather to a facility that featured a field six yards narrower than usual, Maryland showed clear signs of discomfort.

The Terps struggled to clear the ball with the tighter field, but they stuck around in the back-and-forth affair, scoring twice in the final two and a half minutes — including the game-tying goal with 16 seconds — to force overtime.

And though the team lost in overtime, Tillman saw the fight his team possessed.

“This journey will continue and we’ll stick with it,” Tillman said. “We’ll stick together and we’ll keep fighting.”

His team responded with three consecutive comfortable victories over Albany, Villanova and North Carolina in the middle of the season to improve to 8-1 ahead of a matchup with then-No. 1 Penn State at Maryland Stadium.

Maryland absorbed a disastrous first quarter where it fell behind 8-1, and rallied to get within a goal in the third quarter. But the Nittany Lions answered with three consecutive tallies to hand the Terps their second loss.

After rebounding with two conference victories over Michigan and Rutgers, Maryland faced a familiar situation against No. 9 Ohio State on the road. Late in the fourth quarter against the Buckeyes, the team needed a timely goal to force overtime — and attackman Logan Wisnauskas provided it with 23 seconds remaining.

Then, in overtime, Bernhardt took over. The Tewaaraton Award finalist — who became just the third player in program history to eclipse the 50-goal mark — sprinted past his defender, dove across the crease and netted the game winner.

“Those two guys, they’re always ready for the moment,” defender Matt Rahill said. “It was no surprise that Logan had the game-tying [goal] and Jared ended it.”

With the victory, Maryland seemed to have all but secured a spot in the NCAA tournament. In the weeks after, though, the season took a drastic turn for the worse.

Two consecutive losses to rival Johns Hopkins, in the regular season finale and the Big Ten tournament, threatened to leave the Terps out of the tournament field for the first time since 2002.

But the team’s anxiety on Selection Sunday were erased when its name appeared on the bracket against No. 6-seed Towson.

“It was weird just sitting there, like, wondering if we’re actually going to make the tournament,” midfielder Bubba Fairman said. “It was really eye-opening and it allowed us to kinda like sit back and realize what we need to do to be better going forward.”

In that first round game against Towson, the Terps once again used a late score to force overtime. With three seconds left in regulation, Bernhardt took a pass and fired the game-tying score to save the season. Then, attackman Louis Dubick hit the game winner in extra time to push Maryland into the quarterfinal.

And against Virginia in the quarterfinal in Hempstead, New York, yet another trip to championship weekend seemed imminent with a 12-7 lead in the fourth quarter. But similar to their struggles to put away Richmond, the Terps couldn’t find the late strike that would cement their spot among the final four teams.

Virginia scored five goals in the final 10 minutes, including a controversial game-tying shot that deflected off the crossbar with just over a minute to play, to extend the game into overtime.

The Terps had done just enough to overcome inopportune lulls in their play during the regular season, but Virginia capitalized off the mistakes to end their season.

“Our kids did everything they needed to do,” Tillman said. “I need to do a better job in that moment managing some of the things of the game.”

Tillman’s team will lose 10 seniors from its roster, nine of which played substantial minutes this past season. Three regular starters — Dolan, Dubick and defender Curtis Corley — along with its primary faceoff man, Henningsen, are among those departing.

But the Terps’ offense will return the top four point scorers in Bernhardt, Wisnauskas, Fairman and midfielder Anthony DeMaio. The defense will retain Brett Makar, Jack Welding and Roman Puglise, but it remains to be seen who will take over for Dolan as the heart of the backline.

Tillman’s 2019 recruiting class also ranks as the top in the nation according to Inside Lacrosse, headlined by DeMaio’s brother, Nicholas — a five-star attackman who enrolled early and redshirted this season.

“Going into next year, we lose a lot of key pieces,” Fairman said. “But at the same time, the coaches do such a good job recruiting and kind of filling in those gaps.”

And so as Maryland looks to reload and bounce back from narrowly missing the final four for just the second time under Tillman, the expectations for the program remain the same.

“The standard’s the standard around here,” Tillman said. “And that will never change.”