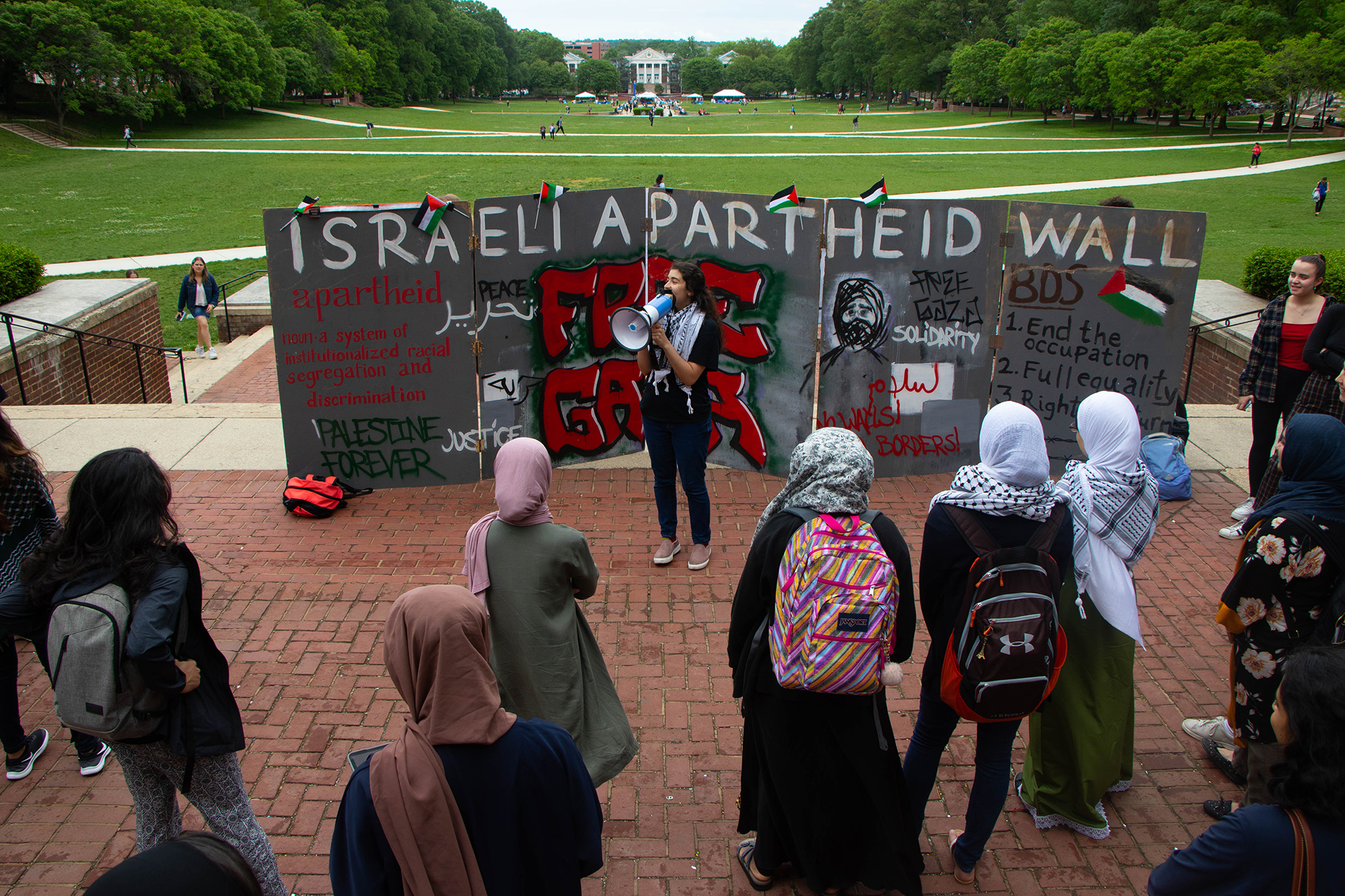 Students for Justice in Palestine protest Israel Fest, hosting a teach-in on boycotting Israel in front of McKeldin Library on May 9, 2019. (Julia Nikhinson/The Diamondback)

By Jillian Atelsek and Angela Roberts

A light drizzle turned to pouring rain above the University of Maryland on Thursday, while about 40 students were gathered in front of McKeldin Library to boycott the annual celebration of Israel Fest.

Though a handful rushed for cover, those who remained — many huddled under umbrellas, clutching megaphones or draped in Palestinian flags — weren’t deterred.

“The freedom of Palestine is like a tree,” one student told the crowd. “It will grow under this lovely rain.”

Yet again, Israel’s independence day saw both festivities and protest at this university. While hundreds of students wandered about on the lower part of the mall, eating falafel and taking camel rides to celebrate the country, others gathered on the library steps to criticize it, arguing that it commits human rights violations against the Palestinian people.

Israel Fest aims to honor Israel’s “rich culture and history,” said Mia Kaufman, who serves as vice president of cultural affairs for the Jewish Student Union and helped organize the event. And while she said she feels a deep connection to the country — having visited it three times — she respected the protestors’ right to oppose it.

“I think they have as much right to be here as we do,” she said.

Segev Elazar Mittelman said he saw the festival — which was co-sponsored by a number of student groups, both Jewish and non-Jewish — as more of a celebration of Israel’s independence than a political event.

Still, the freshman computer science major recognized that Palestinians observe the anniversary as the “Nakba,” which translates as the “catastrophe” and commemorates the mass exodus of more than 700,000 Palestinians from their homes during the 1948 Arab-Israeli war.

That’s something that students at the protest — which began at about 3 p.m. and was hosted by a handful of groups, among them Students for Justice in Palestine — aimed to highlight.

“We want to show that there is another side to Israel,” said Shiv Shukla, a member of SJP.

The group’s chants — like “Displacing lives since ‘48, nothing here to celebrate!” — echoed across the mall.

The protest took place in front of a blockade painted with the words “Israeli Apartheid Wall.” It was meant to mimic the wall that separates Israel from Palestine, Shukla said, and to block the festival from the view of passersby.

The festival comes just more than two weeks after the university’s Student Government Association shot down a resolution that would have urged the administration to divest from a list of companies that divestment supporters say fund human rights violations in the Palestinian territories.

More than 100 students spoke to the SGA before the vote, in an emotionally charged debate that lasted five hours. Billy Stranger, a junior psychology major and an SJP member, said he hopes the boycott will inform the campus community so that when next year’s bill hearing comes around, they have a better understanding of the divestment movement.

“And hopefully the bill will be passed, and the University of Maryland will stop playing a active role in wars whose only purpose is profit,” he said.

Shukla added that the group hoped their structure — painted with bright colors and adorned with small Palestinian flags — would catch people’s eyes and encourage them to learn more about the Israeli-Palestinian conflict.

“The main thing here we’re trying to do is engage with the broader campus community,” the sophomore computer science and environmental science major said, “and just hopefully talk to people about what’s going on and change their minds.”

David Knopf, a senior government and politics major who had the Israeli flag draped across his shoulders to celebrate the festival, said he tried to share his thoughts about Israel with a group of protesters, but they interrupted him. He found it symbolic of what he said the wider issues behind the conflict are: both sides remain stuck in their viewpoints and refuse to work toward common ground.

After graduation, Knopf plans to move to Israel and become an Israeli citizen. Come September, he will be enlisted in the Israeli Defense Forces — a decision he made after much deliberation. He said the fact he will be perpetuating the occupation of the West Bank troubles him, but he wants to ensure that Israel’s existence remains secure.

“Anyone who claims to have the answers is delusional and spewing lies,” he said. “There are no easy solutions.”

But for Stranger, the issue was more clear-cut.

“The truth of the matter is, there are lots and lots of really abhorrent human rights violations occurring,” he said. “Israel fest goes on to celebrate Israel, the nation, but it doesn’t involve any of the acknowledgment of the suffering and mistreatment of Palestinians. So we are here to provide that awareness.”