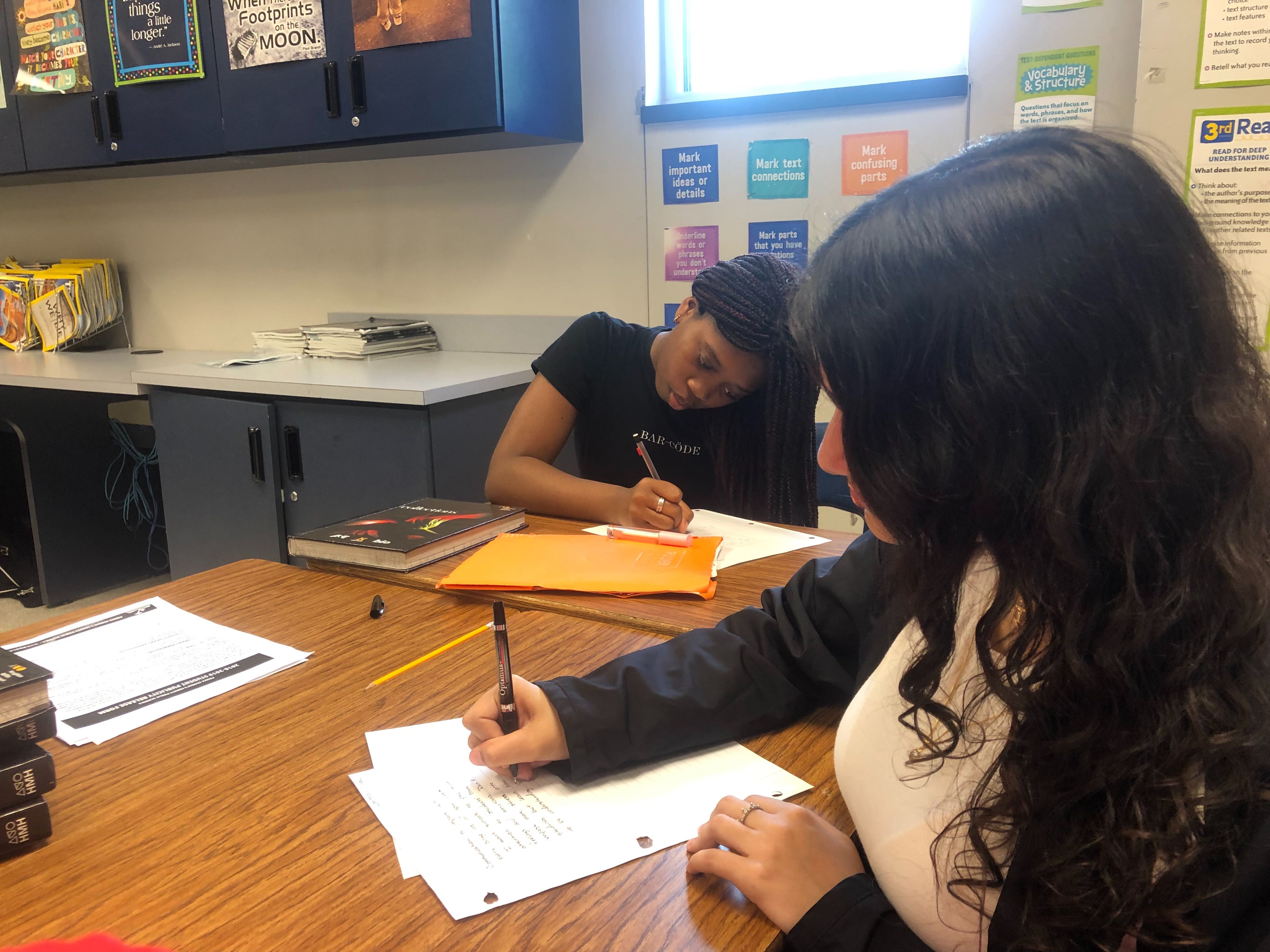 Northwestern High School students Arabella Wilson and Larissa Cirpaci draft the script for their performance as part of the "Writing for Change" program. The event will be held May 10 at Tawes Hall. (Meghan Lockwood/For The Diamondback)

By Fatemeh Paryavi
For The Diamondback

In the classrooms of Hyattsville’s Northwestern High School, students rarely get to discuss current societal issues such as immigration, police brutality and gun violence — but a group of University of Maryland students is trying to change that.

As part of this university’s Writing for Change class, six Maryland students are collaborating with local high school students to use creative writing as a tool for social change.

Justin Lohr, the instructor of the class, said his students mentor Northwestern students by helping them come up with motivation strategies, giving them feedback and helping them better express their ideas. Their work will culminate this Friday with a show in Tawes Hall, where students will present their writing with creative performances, including spoken word, skits, dances and musical compositions.

“We hope that the performances, in humanizing difficult issues and exposing the audience to perspectives that directly challenge dominant narratives and open up new ways of seeing them, will move audience members towards reassessment of their beliefs and even revision of those beliefs,” Lohr wrote.

Over the course of the program, Northwestern students learned skills such as scriptwriting, recognizing patterns and devices in writing and incorporating rhetorical devices into their work. While the idea for the performance came from the high schoolers, the university students helped pick the mediums, the genres and motivated them to finish their piece in time, said Jake Hess, a senior international business major.

Sarah Ronayne, a freshman government and politics major, is one of the program’s six “college buddies.” She said her group will be performing a poetry and spoken word piece about police brutality.

“[The students] have the tools for it. They all have the capacity to talk about local issues,” Ronayne said. “They’re talking about the issues that are directly affecting them.”

“We seek to give all voices a seat at the table and work to bring visibility and authentic listening to the voices of high school students, who, due to ageism, racism, and a variety of other discriminatory prejudices, are often ignored and quickly dismissed,” Lohr wrote.

Some of Lohr’s students said they are gaining just as much from the experience as the Northwestern students are.

“I enjoy being more of a resource rather than a teacher, in a way,” Ronayne said.

Hess said he didn’t expect much when he first started at the program, but after immersing himself, he had a different perspective.

“I had to kind of put myself in the position that they are — as ninth graders … going into the classroom where they have complete artistic freedom through any medium,” said Hess, whose group is performing a play and spoken word poetry about violence. “I really wish I had a class like that.”

Briana Ruiz, a junior English and film studies major, wrote that she originally wanted to become a teacher, but was “horrified” with the educational system. She joined the program because she wanted to fight back against “many disparities in the school system and unconsidered outside influences” that can prevent students’ success, she wrote in a message.

And as she watched the high school students learn script writing skills and work on their case study, she felt she gained a new perspective.

“[The program] has definitely changed my mind about how active you can be in the community,” Ruiz wrote.