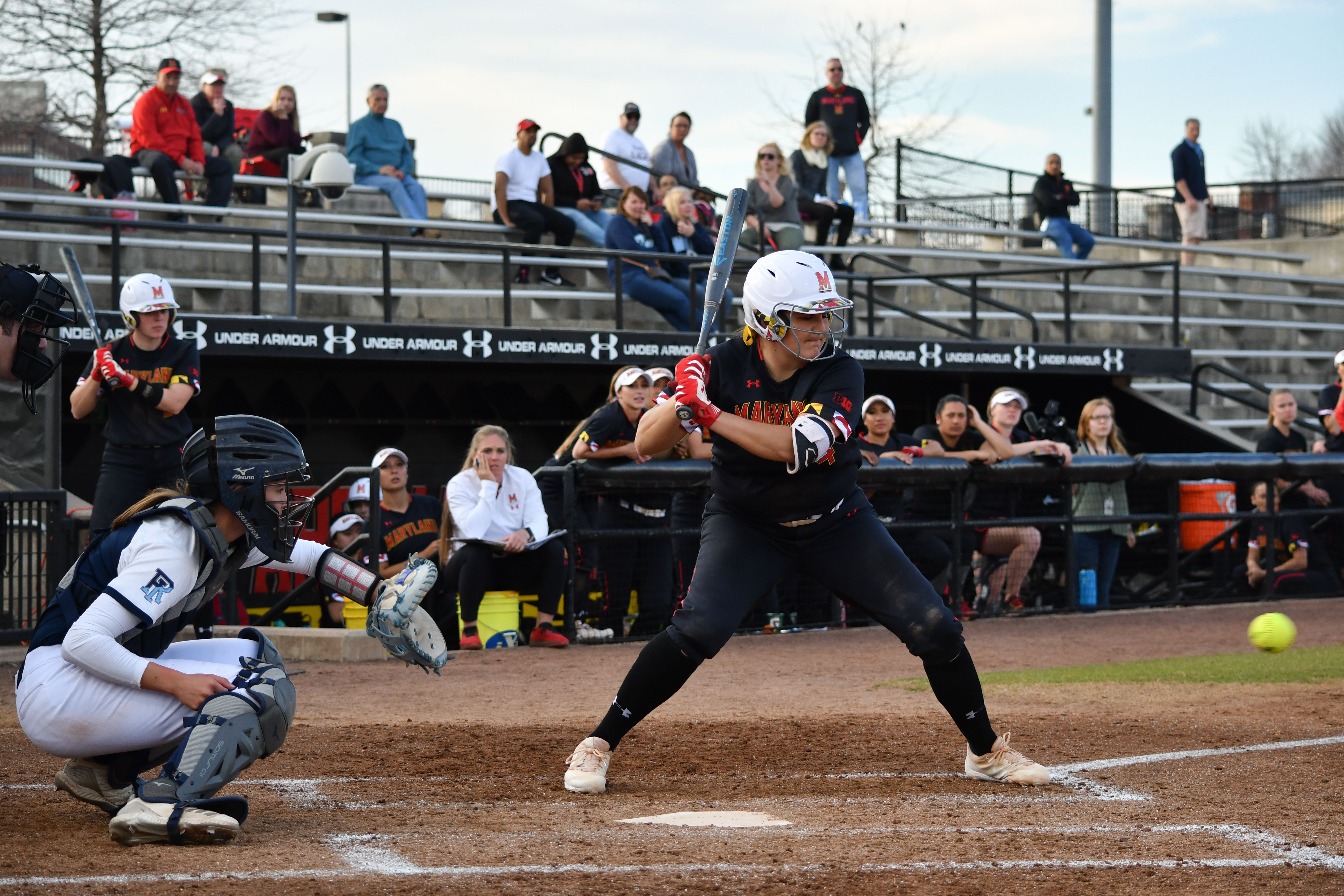 After back-to-back singles from right fielder Amanda Brashear and third baseman Anna Kufta and a walk for first baseman Taylor Wilson, the bases were loaded for Maryland softball in the bottom of the sixth with one out.

Catcher Gracie Voulgaris entered the batter’s box, her team trailing 6-0, with the weight of a potential comeback in the series-opening game on her shoulders.

Voulgaris drove the fifth pitch she saw right back to pitcher Meghan Beaubien, who was unable to gather the ball as it bounced through the left side, sending Brashear home for Maryland’s first run of the night — the first step in cutting away at a six-run lead.

But the lack of consistent offense that has plagued Maryland in its recent losing stretch was again its pitfall Friday. The Terps offense failed to rally off Voulgaris’ base knock, falling in game one of the series, 6-1, for their sixth straight defeat.

“We just need to clutch-up a little bit better,” coach Julie Wright said. “But I was happy to see it breaking through because that prepares us.”

First baseman Alex Sobczak plated the runners with a single, and in the bottom half, the Terps had no answer. Despite a Kufta double to right field, the inning ended quietly with designated player Sammie Stefan fouling out.

Michigan doubled its advantage the next inning, helped by two errors from shortstop Bailey Boyd.

Boyd’s first error was an overthrow to first base that sailed into the stands, putting catcher Katie Alexander in scoring position. Alexander then scored on an RBI single from center fielder Natalie Peters. And the Wolverines weren’t quite finished, taking a 4-0 lead after a sacrifice fly from Sobczak.

Maryland’s start to the bottom of the third was promising, but it quickly fell into ruin. Second baseman Regan Kerr led off with a double down the right-field line, but she was caught in a rundown between second and third base.

In the circle, Golden recovered from the two shaky innings and pitched three straight hitless frames. To keep the clean record in the top of the fifth, the Terps’ defense had a double play after the third baseman Madison Uden grounded out to Wilson, who tossed it to Boyd at second base, then Kerr at first.

“[Golden] got sharper as the game went on,” Wright said.

Michigan’s offensive slump ended in the top of the sixth, when Peters drove a two-run triple to left center and put the Wolverines up 6-0.

Maryland started putting some pressure on Beaubien, who entered Friday with a 2.01 ERA, in the bottom of the sixth. But Beaubien exited the game with an apparent hand injury after Voulgaris’ RBI single, tasking freshman right-hander Alex Storako with getting out of the bases-loaded jam.
Storako, who has a 2.16 ERA, quickly sent Boyd back to the dugout on a four-pitch strikeout, and she forced a groundout for the final out, as the Wolverines escaped with just one run allowed and a commanding five-run lead.

“I loved the fact that [Storako] came in, because she’s tomorrow’s starter,” Wright said. “It was great for us learning things. We were passing information even after the game ended.”

Kiana Carr relieved Golden in the circle in the top of the seventh, and the switch proved effective at keeping the Wolverines from extending their lead heading into the bottom of the seventh.

In need of a rally, Kerr led off the inning with a single up the middle. But strikeouts from center fielder JoJo McRae and Brashear put the pressure on Kufta, who grounded out to third base to end the game. The loss pushed the Terps’ losing skid to six with two more games still to play against the Wolverines, who now own a 20-1 conference record this season.

“Those are great players that are going to have great games,” Wright said. “We won’t be able to keep everyone in Michigan’s lineup from not doing pretty well. You just try to contain it.”