“You and I are made of the cosmos”: Bill Nye headlines packed event at UMD 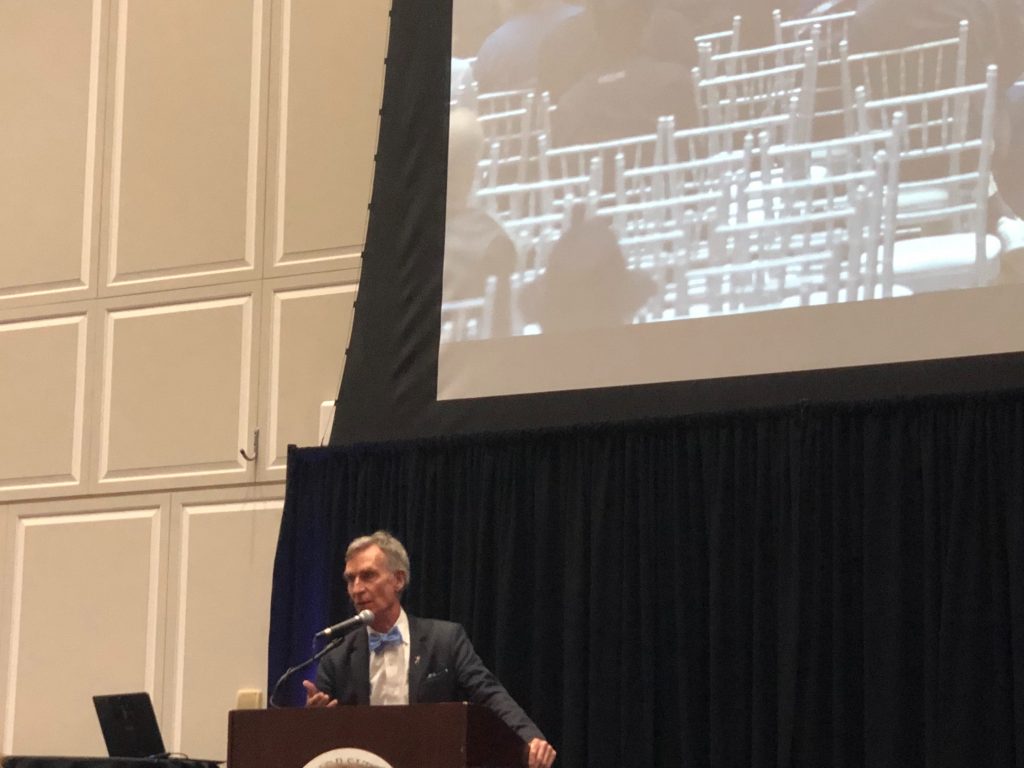 Bill Nye speaks to a packed Riggs Alumni Center on May 1, 2019. The event was part of the annual IAA Planetary Defense Conference. (Shreeya Agarwal/For The Diamondback)

When Bill Nye walked up onto the stage in the Riggs Alumni Center Wednesday evening, he told the packed crowd about how humans are unique in their ability to learn and seek knowledge about their origins.

“You and I are made of the cosmos. We are made of the dust and debris of the exploded stars.” Nye said. “We are at least one of the ways that the universe knows itself.”

Nye, a science communicator and popular television personality known to many as “Bill Nye the Science Guy,” was joined by Jim Green, NASA’s chief scientist, and other asteroid scientists as part of the IAA Planetary Defense Conference to discuss the possibilities of an asteroid impact and the possible actions that could be taken against such cosmic collisions.

The event comes as part of the larger five-day conference, held in College Park by the International Academy of Astronautics. The biannual conference, the academy’s sixth, pledged to bring together global experts to discuss the threats and risks posed by asteroids and comets and the possible mitigations strategies that can be used to avert such objects.

“Countries all over the world have space programs and it just brings out the best in us,” said Nye, CEO of the Planetary Society, a non-profit space interest group. “Basically, we make discoveries and save the world.”

Organized by this university’s aerospace engineering and astronomy departments, about 250 people registered for the event, according to an estimate by Elizabeth Warner, the director of the university’s observatory. Both students and members of the Planetary Society attended the event.

Kelly Ngo, a junior astronomy and public health science major, talked about how she appreciated Nye’s contributions to science and the conference. She said it was crucial for scientists to make their work accessible to the public in order to gain more knowledge and funding for their work.

“He is the prime example of having an expert bridging the gap between science and the general population,” Ngo said.

Brianna Montoya, a first-year physics doctoral student, said she has looked up to Bill Nye since her childhood.

“He’s just one of those figures, like Neil deGrasse Tyson and Carl Sagan, who are so visible and can take science and try to make it as accessible as possible for people,” Montoya said. “It wasn’t just seeing a childhood idol, but it was also like seeing a childhood hero and inspiration.”

Nye also discussed his relationship with Sagan, founder of the Planetary Society and mentor to Nye in his astronomy class at Cornell University, and what he says is his duty to carry on Sagan’s legacy.

He noted how Sagan appeared on The Tonight Show with Johnny Carson in 1976 to present a model on space exploration called “solar sailing.” And in 2017, Nye appeared on The Late Show with Stephen Colbert and presented a similar model.

“This really is the legacy of Carl Sagan and the Planetary Society,” Nye said.

Nye and the other planetary scientists also discussed upcoming missions planned by both NASA and other global space agencies that could assess the possibility of destroying near-fatal asteroids.

One of the missions they mentioned was DART, the Double Asteroid Redirection Test, which is a joint project between NASA and the Johns Hopkins Applied Physics Laboratory. Several university-affiliated researchers, including Tony Farnham, a research scientist in the astronomy department, are part of the project.

The project is a special probe that can be sent into space to hit an asteroid in order to “nudge” the object and change its path from hitting the earth.

“I think it’s really interesting to hear from people who are really out there doing this and actually testing this,” said junior government and politics major Clare Hemmig. “We don’t worry about this on a daily basis, but there are smart people out there who are making sure we’re safe from things like asteroids.”

Green discussed the importance of studying objects near Earth, such as asteroids and comets, for the sake of humankind’s safety.

“This is the first species on Earth that can actually change its fate, unlike the dinosaurs,” Green said. “These small worlds are making enormous discoveries.”