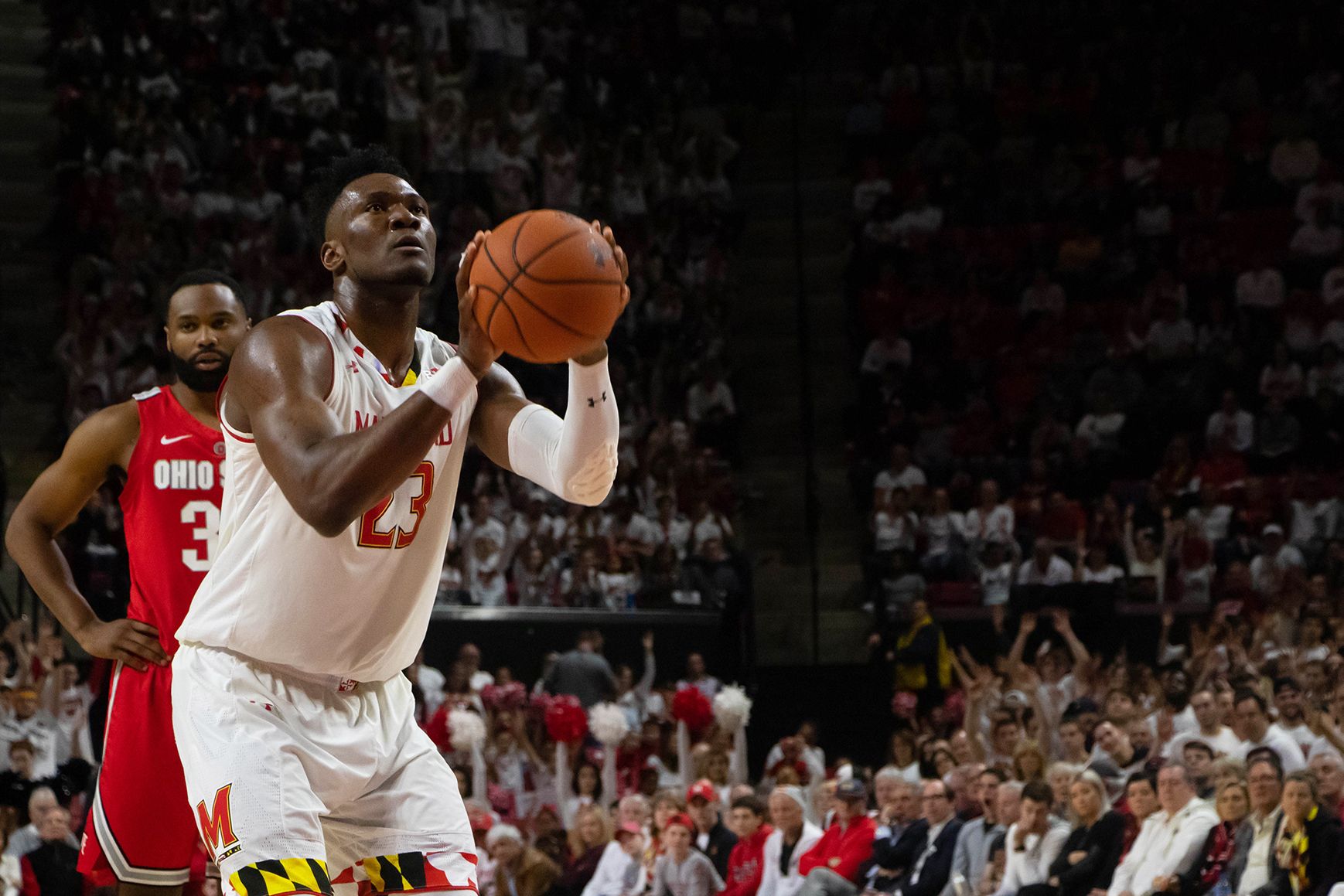 Maryland men’s basketball forward Bruno Fernando announced Wednesday on Twitter he is remaining in the NBA Draft and will forgo his final two years of eligibility.

The sophomore earned All-Big Ten first team honors during a breakout campaign, in which he posted 13.6 points and 10.6 rebounds per game en route to 22 double-doubles. That production made him a finalist for the Kareem Abdul-Jabbar Award, which is given to college basketball’s best center.

Fernando and guard Anthony Cowan announced April 15 they would be declaring for the draft. Cowan has yet to make a final decision regarding his status.

THANK YOU MARYLAND FOR EVERYTHING. :heart::heart::turtle::pray::skin-tone-5:.
I LOVE YOU GUYS FROM THE BOTTOM OF MY HEART. pic.twitter.com/DNZ48IQ34m

“After further consideration, I have decided to place my entire focus on the NBA Draft as I pursue my dream of playing basketball at the highest level,” Fernando said in a release. “I want to thank every member of the Maryland community, especially my teammates, Coach Turgeon and the coaching staff, for making my time here special and everything my family and I could have hoped for. I will always consider Maryland a home away from home.”

He attended the NBA Combine last year, too, but returned to College Park and became one of the most dominant bigs in the conference. Fernando’s 22 double-doubles led the Big Ten and his .607 shooting percentage was the best mark in the conference.

Fernando worked to improve his efficiency when faced with double-teams, and he also made the Big Ten’s all-defensive team. Still, there were times Fernando struggled to influence proceedings, especially early in games. He supplied a season-low three points in Maryland’s Big Ten tournament loss to Nebraska.

Overall, though, Fernando showed improved passing from his freshman year, helping to alleviate pressure from double-teaming defenses, while displaying an aptitude to score in a variety of ways.

The 6-foot-10 forward scored a season-high 25 points on 11-for-12 shooting, including a 3-pointer, in a narrow win over Indiana in January. He finished his Terps career averaging 12 points and 8.7 rebounds per game between his freshman and sophomore seasons.

“Bruno and I have gathered a lot of information and based on those conversations we are excited about his draft prospects,” coach Mark Turgeon said in a statement. “I know this was a difficult decision for Bruno because of how much he loved being in College Park. He fully embraced the Maryland experience and loved the fans just as much as they loved him. I’m incredibly proud of the player and, more importantly, the man Bruno has become during his two years here at Maryland. His work ethic and drive to succeed are second to none. We wish him the very best as he pursues his dream at the next level.”

With Fernando’s departure, Maryland still retains most of its key contributors from this year’s Round of 32 team. If Cowan returns, the Terps will still have four of their starting five, and seven of their eight-man rotation, with forward Jalen Smith hoping for a similar jump in year two as Fernando displayed.

Now, Fernando hopes to become the first Angolan to be drafted into the NBA. Many mock drafts have Fernando projected as a mid-to-late first round pick. He’ll find out at the draft on June 20.