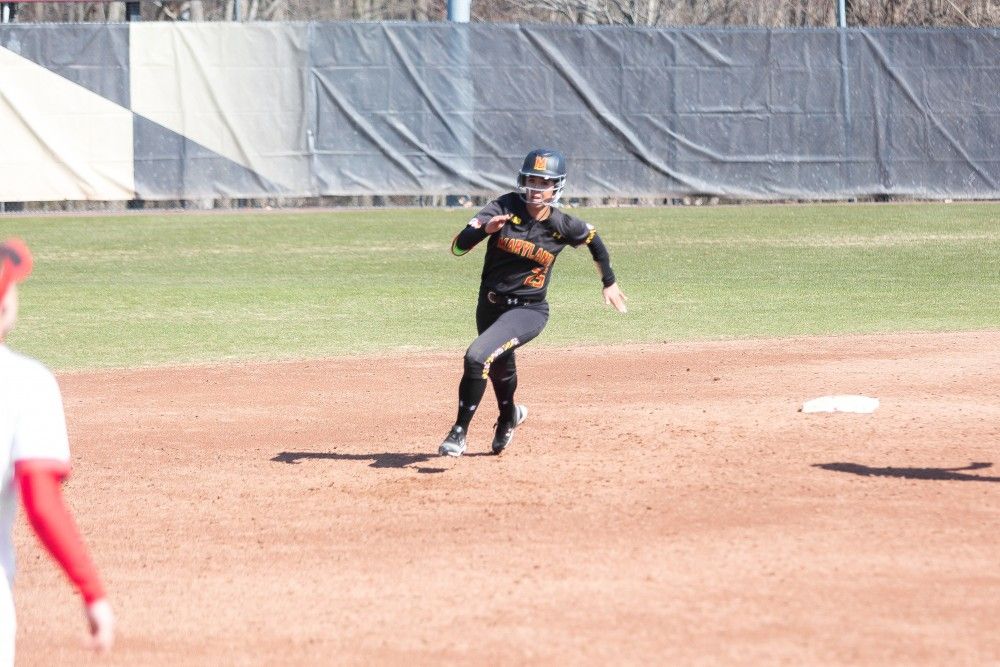 With runners on the corners in a second inning quickly slipping away from Maryland softball, catcher Gracie Voulgaris fired to second in an attempt to cut down Nebraska center fielder Rylie Unzicker on a steal attempt.

The throw reached second baseman Regan Kerr early, forcing Unzicker into a pickle. Kerr then threw to first baseman Taylor Wilson, and the Terps appeared to have the situation under control. But Wilson hesitated, giving Unzicker a brief window to sprint and slide toward second safely.

What had seemed like a clear out evolved into two runners in scoring position, and the Cornhuskers didn’t look back. They piled three runs onto a 1-0 lead to take firm control of the game and force pitcher Kiana Carr out of the circle.

The four-run second frame was all Nebraska needed to vanquish a slumping Maryland squad in a 14-0 loss Saturday, as the Terps’ inconsistencies on the mound and meager showing at the plate doomed them to their fourth-straight loss.

After a scoreless first inning, Carr was rocked in the bottom of the second, causing coach Julie Wright to swap in pitcher Victoria Galvan, who entered Saturday with a 9.71 ERA.

The redshirt freshman has struggled with her control often this season, and the Cornhuskers’ lineup took advantage in the bottom of the third.

To lead off the frame, first baseman Madi Unzicker, who mashed a three-run blast Friday to seal a five-inning win, powered Galvan’s 3-2 pitch to deep right field for what appeared to be her second home run of the series. But instead of landing on the opposite side of the fence, it dropped in right fielder Amanda Brashear’s outstretched glove, robbing Nebraska of a run.

Despite Brashear’s heroics, a wild pitch from Galvan — bookended by two singles — helped plate a run, anyway, to push the lead to 5-0.

While Wallace thrived in the circle, Madi Unzicker’s hot bat continued to haunt Maryland in the bottom of the fourth. She laced a two-RBI triple down the left-field line off Galvan, igniting another offensive outburst. Wright elected to continue with Galvan, and Nebraska continued to rake.

The Cornhuskers bombarded Galvan for nine runs on eights hits in the frame — aided by a hit batter and two walks — to balloon the lead to 14-0 and give Maryland a final half inning to keep the game going.

But the Terps were no match for right-hander Regan Mergale, who entered in the top of the fifth inning and polished off a lifeless Maryland lineup. The squad managed just one hit off a Nebraska pitching staff that ranks just one spot ahead of it in the Big Ten in team ERA.

On a windy day in Lincoln, Nebraska, the Terps were blown out for the second day in a row by a superior Cornhuskers squad — another dagger to a team clinging to its 12th-place spot in the Big Ten standings and facing an ever-increasing possibility of missing the conference tournament.