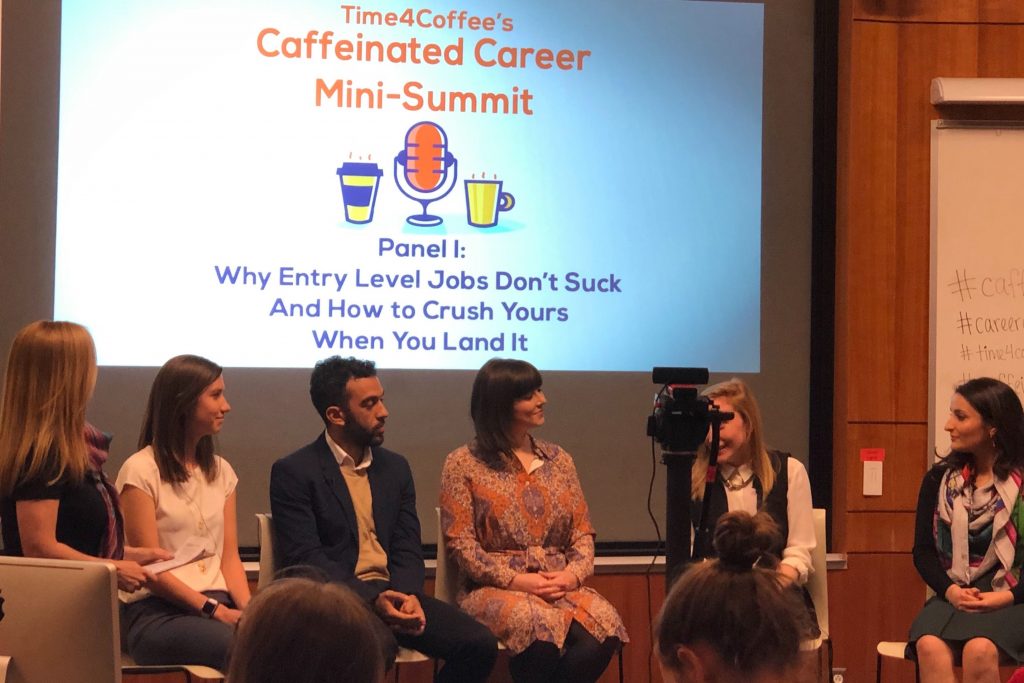 Panelists give out career advice to University of Maryland seniors at the Caffeinated Career Mini-Summit hosted by Time4Coffee host Andrea Koppel on April 17, 2019. (Photo by Shreeya Agarwal/For The Diamondback)

With less than a month remaining in the spring semester before final exams, University of Maryland seniors are searching hard for their first job out of college. On Wednesday, the journalism school hosted the Caffeinated Career Mini-Summit to help.

The open-mic question-and-answer event at Knight Hall was hosted by former CNN reporter Andrea Koppel, the founder and host of Time4Coffee, a podcast that offers career advice to recent or soon-to-be graduates. It featured panels on career strategies like taking advantage of an entry-level job, and offered tips on how students can maximize their experience once they’ve been hired.

“What kind of life do you want to have?” Koppel asked, encouraging attendees to be aggressive and not settle for a regular job. “Not everybody wants to make it to the top because maybe you’re happy having a decent job.”

Research from the National Association of Colleges and Employers suggests graduates from the class of 2019 will fare better than the class of 2018. Employers are planning to hire 16.6 percent more college graduates from this year’s class compared to last year’s and this year’s employment projections are the highest since 2007, according to the association’s 2019 job outlook survey.

Senior computer science major Yuchaol David Quin said he landed two job offers this semester, one of which was through an on-campus career fair.

“The career fairs are super helpful as well as the website Careers for Terps. Both of them led me to my current job,” said Quin, who received offers from the insurance company, Geico, and Leidos, a defense and biomedical research company based in Virginia.

The Knight Hall event is one of many networking efforts the university puts on each year to help connect students with recruiters on campus. The University Career Center hosts career fairs on campus for students interested in networking and possibly landing an internship or full-time job.

“Students appreciate career fairs, networking events, and meetups because it allows them to interact with multiple employers in one setting,” said Allynn Powell, associate director for employer relations and professional preparation at the Career Center, in a message.

This university’s full-time employment rate was higher in 2017 than the national full-time-employment rate of 57.8 percent for all graduating students, according to a report from the National Association of Colleges and Employers that year. But this university still ranks lower than other local schools like Penn State at 83 percent and Delaware at 67.5 percent.

A 2017 survey, conducted by this university’s Career Center, found that 62 percent of graduates reported being employed in a full-time position within six months after graduation. About 22 percent went on to complete post-graduate education and others started their own businesses, did volunteer work or pursued a different path.

Still, some students, like senior government and politics and women’s studies major Katie Dallimore, remain frustrated with what they see as a lack of resources set aside by the university for certain majors, while other majors like those in STEM fields and the business school are prioritized.

“I think there’s a huge focus on their favorite majors and the rest of us become an afterthought,” said Dallimore, adding that she is still looking for job offers, despite having applied to over 30 jobs. “There’s not a lot of specific resources for particular career paths.”

Renae Lee, a senior history major, said she took away a lot of good advice from the Time4Coffee event as she starts her career.

“One piece of advice I remember hearing was to be bold and courageous in your entry-level positions because your employment is as beneficial as you make it,” Lee said. “You have to go out and look out for opportunities, and that will signal to your employers that you are willing to go forward.”