UMD alum Eric Swalwell will run for the 2020 Democratic nomination 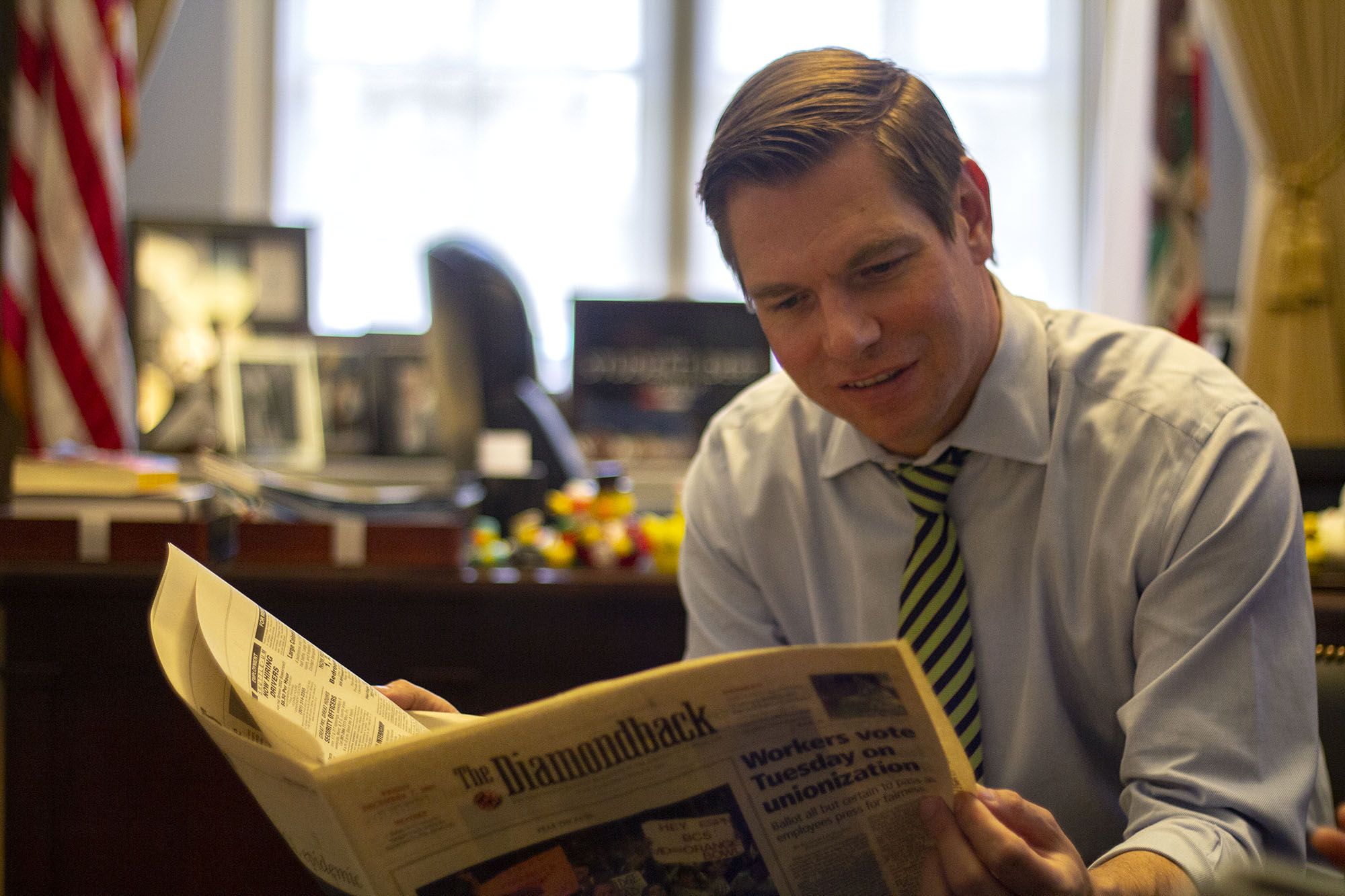 After months of speculation, University of Maryland alumnus Eric Swalwell announced his candidacy for the 2020 Democratic presidential nomination last week.

During an appearance on The Late Show with Stephen Colbert, the California congressman — a 2003 graduate of this university — said he’d enter into a crowded Democratic field of nearly 20 candidates.

“I see an America in quicksand, making zero progress on anything that matters,” Swalwell, 38, said in a press release announcing his candidacy. “We can no longer count on the same old people to solve the same old problems. Nothing will change until we have a leader who is willing to go big on the issues, be bold with solutions, and do good in governing.”

During his time at this university, Swalwell served as the Student Government Association’s campus affairs vice president and the inaugural student liaison to the College Park City Council, a position that still exists today.

Swalwell transferred to this university in 2001 after an injury ended his Division I soccer career at Campbell University in North Carolina.

When he arrived on the campus, he found a community reeling from student riots after the Maryland men’s basketball team’s loss to Duke in the Final Four. Students lit more than 60 fires around the city and caused about $500,000 in damage.

To bridge the gap between students and city residents, Swalwell helped create the position of student liaison with then-city council member Eric Olson, whom Swalwell has called a mentor.

Olson said he knew then that Swalwell would have a bright future in politics, recalling a time Swalwell spoke at a community meeting.

“There were people who were twice his age — three times and even four times his age — who were impressed with him. And this was back when he was probably 20 years old,” Olson said. “He’s genuine, and he’s always had a good way of communicating with people.”

Alex Tobin, who serves as the current student liaison, said he has a special sense of pride that someone who held the position previously is now running for president. He called Swalwell — who received his law degree from the University of Maryland law school in 2006 — a “double Terp.”

Tobin said that Swalwell’s creation of the student liaison position has been instrumental in improving relations between the city and this university.

“His biggest legacy is that it’s worked,” Tobin said. “We’ve seen the relationship between students, long-term residents and the university increase over the past 10 years. We’re in a good place now, we have a working relationship, we trust each other, we collaborate, and that’s in large part because of the student liaison position.”

Swalwell, a member of the House Judiciary Committee, faces an uphill battle in his bid for the White House. Considered a longshot by most pollsters, he’ll have to overcome well-known candidates such as Sen. Kamala Harris (D-Ca.) and Sen. Bernie Sanders (I-Vt.), among others who have officially announced their candidacy.

Swalwell’s platform will focus on gun safety. He has been outspoken on the topic of gun rights, proposing a ban on semi-automatic assault weapons that drew the ire of the National Rifle Association.

“I hear from school children who are learning in fear because too many lawmakers love their guns more than they love our kids,” Swalwell said in the release.

Former Vice President Joe Biden, who has not made an announcement regarding his intentions to run, leads most early polls. Only four national polls have included Swalwell as one of their early 2020 candidates, according to FiveThirtyEight.

Despite Swalwell’s home-field advantage in the early California primary and potential appeal to millennial voters, FiveThirtyEight said his late announcement hurts him, as other candidates have already staked their claim on many issues.

But Olson, who texts regularly with Swalwell, said he’s optimistic about the congressman’s chances.

“He’s savvy,” he said. “He knows how to talk about the issues that resonate with people, and I think we’re seeing that happen now in the way he’s emerging here.”