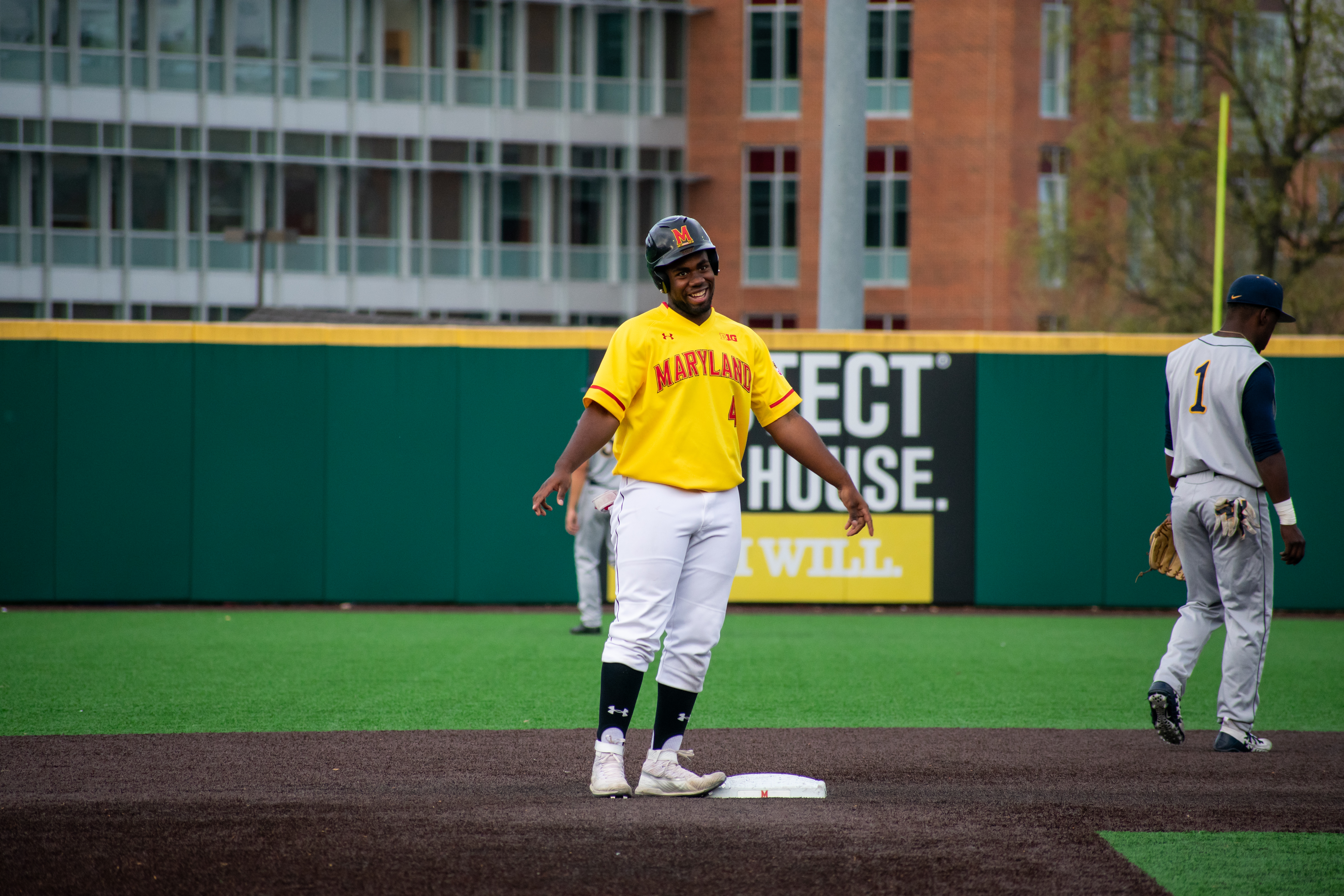 Shortstop AJ Lee sprung out of his head-first slide, easily beating the cut-off throw from shallow right field, and unleashed a massive fist pump. The Maryland baseball senior then motioned toward first baseman Maxwell Costes on second base, and gave the freshman one more pump in the air in appreciation of the double that drove Lee in from first.

The slicing fly into the right-field corner — good for Costes’ third RBI in Saturday’s nightcap against Northwestern — capped another multi-run inning during a series full of them. With lackluster showings on the mound from both sides, each offense raked, posting 63 runs between them in the three-game set.

Costes’ drive established a three-run lead in the seventh inning — one in which the Terps’ unconvincing pitching staff managed to protect — to earn a 12-10 win, clinching a series victory over the Wildcats in the process.

Closer John Murphy entered in the eighth, attempting to close the door on a nagging Northwestern (16-16, 5-4 Big Ten) offense with a six-out save. He allowed one run in the eighth but had no issues in the ninth, punching out his final batter and concluding a back-and-forth game that was as ugly — eight walks and five errors combined — as it was high-octane.

Third baseman Taylor Wright’s ground ball to open the fourth inning appeared fairly innocuous, and second baseman Shawn Goosenberg treated it as such. But his lackadaisical approach resulted in an overthrow that sailed out of play, allowing Wright to take second base to lead off the frame.

Then, right-hander Tommy D’Alise allowed an RBI single from Costes to level the game at one, the start of a five-run fourth that featured three Wildcats pitchers. In the next at-bat, center fielder David Dunn took three steps into the left-center field gap before stopping to watch catcher Justin Vought’s moonshot clear the yard.

D’Alise was pulled after designated hitter Josh Maguire reached on a base knock and Goosenberg committed his second error of the frame, putting runners on second and third with no outs. Left-hander Parker Hanks allowed both inherited runners to score, but he and right-hander Anthony Alepra managed to strand bases loaded.

But the Terps’ four-run edge was short lived. Right-hander Trevor LaBonte, who rebounded last week from a disastrous 2 ⅓ innings against Indiana on March 31, ran into trouble in the bottom half, narrowing the advantage his offense — and Northwestern’s defense — provided him.

First baseman Willie Bourbon led off with a double and Dunn followed with a free pass, setting up catcher Michael Trautwein’s two-run double. A sacrifice fly later in the frame made it 5-4.

As the third game in two days neared an end, both team’s pitching staffs appeared worn out. The Wildcats employed eight pitchers in the first two games of the series and the Terps (18-17, 5-4) used seven. And both squads boast team ERAs of 4.65 or above.

Northwestern left the sixth inning up to Alepra, but he was plagued by self-inflicted wounds. The sophomore plunked two batters, walked two more — one intentionally — and the Terps plated four more runs to open a five-run edge.

And right on cue, Maryland’s offensive outpouring in the top half of a frame gave way to Northwestern’s own rally in the bottom half. LaBonte, who has seemed to hit a wall in the sixth inning throughout his rookie campaign, gave up a leadoff double and loaded the bases with two successive walks.

Maryland retook the lead with second baseman Benjamin Cowles’ solo homer, and added to the edge with center fielder Randy Bednar’s sacrifice fly and Costes’ RBI double. Murphy gave up a two-bagger to Dunn, who scored on an infield single deep behind second base, in the eighth.

But the closer extinguished Northwestern’s offense in the ninth, pushing the Terps one game above .500 in both overall record and in the Big Ten, securing a series win that displayed both the offensive potential and pitching concerns that have defined the team all spring.