Vaping could soon be banned in UMD dorms 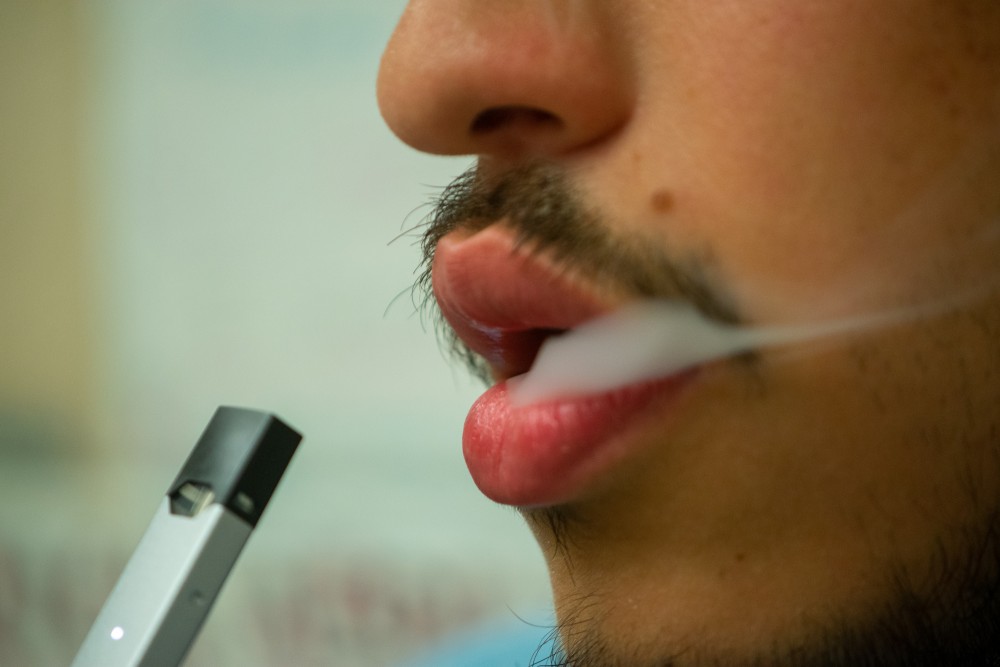 University of Maryland students could be banned from vaping and JUULing in their dorms as early as this fall if a resolution passed by the Residence Hall Association on Tuesday is approved by the Department of Resident Life.

Currently, smoking — but not vaping — on the campus is against this university’s code of conduct, except in a few designated areas. The RHA’s resolution would ban vaping in the residence hall agreement.

Residents would still be allowed to vape on the campus, but not in the dorms, said Michael Wallis, a senator for the North Hill Area Council who presented the resolution. It passed 30-1, with one abstention.

The RHA does not have enforcement power, so the policy would still have to be approved by Resident Life. Wallis, also the vice chair of the Resident Life Advisory Team, said he’s confident it will get passed.

“Right now, I can’t imagine a scenario where it doesn’t go into place,” Wallis said.

Last week, the Maryland General Assembly passed legislation that would raise the minimum age for buying tobacco and nicotine products from 18 to 21. The bill would apply to all types of such products — including e-cigarettes and vaping devices.

If Gov. Larry Hogan signs the bill into law, the new legislation would take effect Oct. 1.

RHA president Bryan Gallion said that even if this happens, it’s still important that the ban be included in dorm rules.

“Similarly to alcohol and other traditional forms of smoking, it still happens within our residence halls … so it’s important to formalize it in our residence hall policy,” Gallion said. “Taking a stance that our campus recognizes the negative implications of these devices will help start the conversation that needs to be had about them.”

Even if the state bill becomes law, underage students would be able to get vaping products in other ways, Wallis added — and the law bans only the purchase of these products, not the use.

“Students underage can get fake IDs to purchase it, students can get friends to purchase it for them, students can buy it online through sellers — there are many means of purchasing JUULs and vapes,” Wallis said. “It’s still important to signal to the students that the university, the student body, the RHA don’t support vaping and JUULing in the residence halls.”

“It’s not a problem in general,” Smith said. “It’s a vape, you can’t really smell anything.”

Jason Woods, a freshman marketing major, agreed. He could see supporting a ban if he thought vaping was a bigger problem.

“I myself have not had a personal issue with people vaping in the residence halls,” Woods said. “I don’t find it to be the most annoying thing in the world, but there are people who do.”

Logan Heller, a senator representing Cumberland Hall, proposed an amendment at the meeting to create a program aimed at helping students overcome nicotine addiction, specifically focused on e-cigarette use.

The amendment failed, with many senators noting that there are resources at the health center to help students addicted to nicotine.

“If you are a smoker, there are a plethora of different services for you. I think that’s great,” said Heller, an economics and government and politics student. “The problem is most kids are addicted to vaping and are addicted to JUULs.”

Wallis said because students can still vape in their rooms, it will be hard to enforce the policy — but he expects it to deter vaping in lounges.

The policy will also allow residents who are uncomfortable with their roommates vaping to be able to report it, he added.

“I think the purpose is less to change their behavior and more to make it known that the university doesn’t support vaping and JUULing on campus,” Wallis said. “It’s more that the university is making a statement regarding their oath to protect the health of the students.”