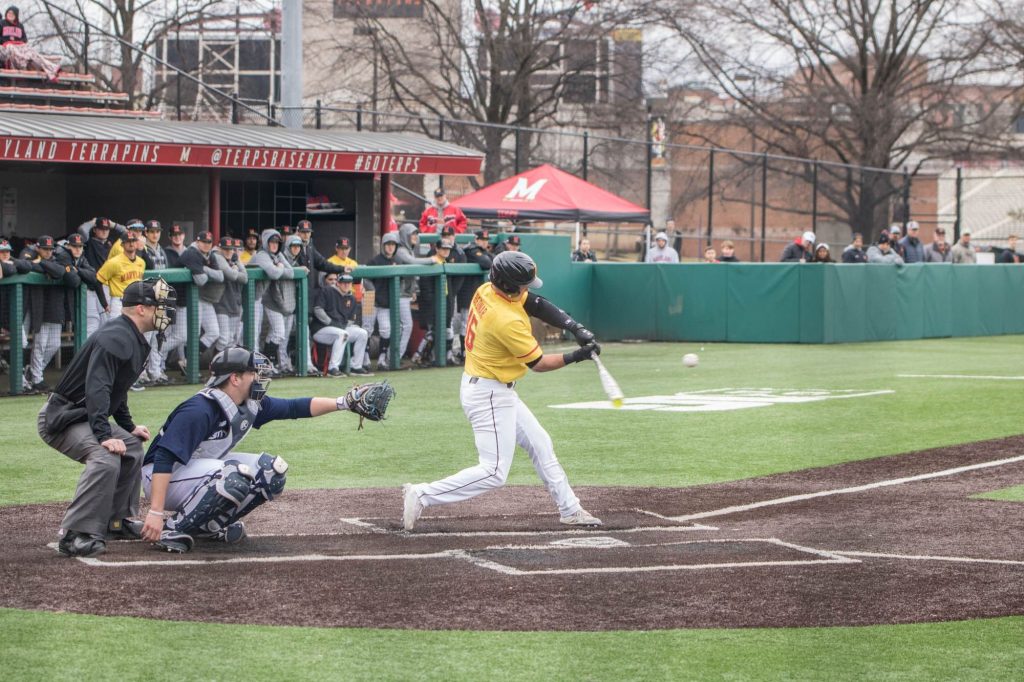 Lavelle tossed a complete-game shutout in the 2018 series opener with the Terps, allowing four hits and notching eight strikeouts in a 4-0 Wildcats win. He was called upon again Friday against the Terps, hoping to open the series with another dominant start.

Maryland had other plans. The Terps lineup rocked Lavelle for nine runs on 12 hits — including seven for extra bases — and forced Northwestern to dip into its bullpen after four innings.

The offensive explosion enabled Maryland to endure a rocky performance from starter Hunter Parsons and win the opening game of the series, 13-8.

Lavelle retired two of the first three batters, but with right fielder Randy Bednar on first and two outs, the Terps came alive with three consecutive RBI hits. First baseman Maxwell Costes roped a double down the left field line, catcher Justin Vought added a single and designated hitter Josh Maguire capped the rally with another triple, giving Maryland an early 3-0 lead and wiping away any thoughts of a repeat performance for Lavelle.

Maryland (17-16, 4-3 Big Ten) tacked on another run in the second frame following a leadoff triple by second baseman Benjamin Cowles, and by the end of the inning Maryland had six hits off the Wildcats’ Friday starter.

Northwestern (15-15, 4-3) struck back in the third after a walk and an RBI triple that sailed over the glove of a diving Chris Alleyne in center field to make it 4-1. But in the top of the fourth, Lavelle’s disastrous start snowballed.

The first six batters of the inning got a hit, with four clubbing doubles. Maryland had a 9-1 lead before there was an out, but Lavelle then recorded three quick ones to escape further damage and end his night.

The large deficit didn’t faze the Wildcats, though, and they roared back in the bottom of the fourth. Parsons allowed two singles to start the inning, then struck out catcher Michael Trautwein before loading the bases with a walk.

A fielder’s choice plated one run, and Parsons’ control betrayed him on an 0-2 pitch that hit designated hitter Charlie Maxwell and forced in a run, leaving Parsons shaking his head. The Wildcats took advantage, notching three straight hits to close the gap to 9-7 before a popout ended the inning.

With Lavelle (3-4, 5.36 ERA) departing after the ugly fourth inning, the Terps continued to find success against the Northwestern bullpen. A two-out RBI single in the fifth frame from Lee, who finished 3-for-5 with four RBI, pushed the advantage to three.

Maryland coach Rob Vaughn stuck with Parsons (6-2, 2.95 ERA) despite his rough fourth frame, and the senior settled back into his rhythm. Parsons allowed just one hit over the next three innings, exiting after allowing seven runs on eight hits in seven innings, striking out seven and walking two.

Maryland added a run in the sixth inning with an RBI single from left fielder Caleb Walls, who was the only Maryland starter without a hit to that point. An RBI bunt single pulled one back for the Wildcats in the eighth, but a ninth-inning two-run blast from Bednar — giving him three hits, RBI and runs on the night — set up closer John Murphy to close out the 13-8 victory.

Maryland was ruthless at the plate Friday, finding an offensive success that has often evaded the team early in Big Ten play with a season-high 18 hits that secured a series-opening win.