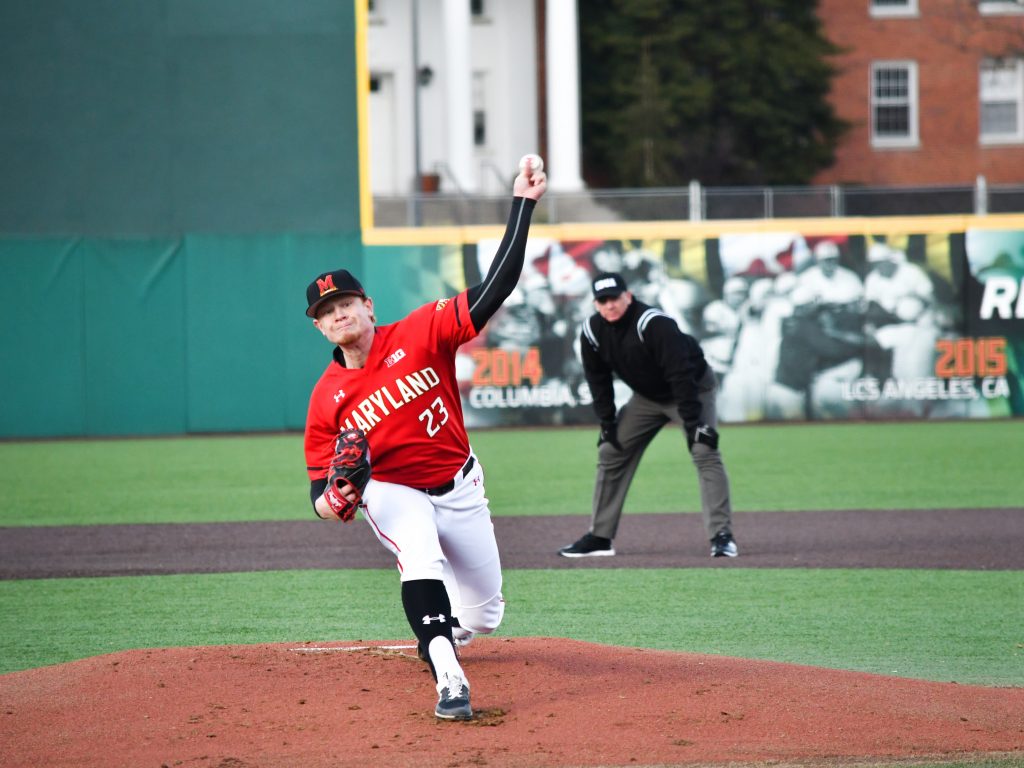 As West Virginia took free pass after free pass Wednesday and dished coach Rob Vaughn’s squad an seven-run loss a day after the Terps needed an offensive outburst to beat William & Mary, 16-10, it became increasingly clear that the initial success on the mound was unsustainable.

The Mountaineers scored eight runs on eight hits in an 8-1 win in which the Terps walked a season-high 12 batters, hit two more and sprinkled in a couple of wild pitches for good measure.

“That’s the battle of two midweek games,” Vaughn said. “It really kind of thins things out.”

Nick Turnbull began the first start of his Maryland career with eight balls in his first nine pitches, rarely sniffing the zone as he issued walks to each of the first two West Virginia batters. After allowing two of the next three batters to reach, Turnbull’s outing was over and the Mountainners held a 2-0 lead.

“Early in the year, [Turnbull] was lights out for us. Just kind of lost the zone a little bit a couple weeks ago,” Vaughn said. “We’re going to keep having to run him back out there. Obviously we wish we could’ve gotten a little bit more out of him tonight, but he’ll be back out there.”

With relievers Elliot Zoellner and Will Glock unavailable due to undisclosed injuries, and a bullpen already taxed by the slugfest with the Tribe, Vaughn turned to right-hander Daniel O’Connor to replace Turnbull.

O’Connor induced what had the potential to be an inning-ending double play, but instead clanked off shortstop AJ Lee’s glove. Then, O’Connor forced home a run with a hit by pitch and surrendered another on an infield single that traveled little more than 40 feet. By the time a groundout ended the first inning, the Terps trailed 4-0.

West Virginia added to that lead in the third inning, when right-hander Sean Heine inherited O’Connor’s bases-loaded mess and promptly walked in a run.

“We had too many freebies,” Vaughn said. “I give guys credit for making some pitches to get out of jams. But just too many pitches, too many free baserunners early.”

The Terps wouldn’t set West Virginia down in order until the sixth inning, and their batters were struggling against Mountaineers starter Nick Snyder. Snyder struck out six and scattered three hits in his five innings, surrendering the Terps’ only run in the fifth, which he started by hitting one batter and walking another.

“We knew he was really good. We recruited him,” Vaughn said. “What you hope on a guy like that is he’d walk some people.”

Lee, however, said he felt the lineup was a bit too passive. And that patience was not rewarded the way the Mountaineers’ was.

Having built a lead by watching pitches go by, West Virginia flashed its power in the later innings. Second baseman Tyler Doanes hit a solo shot in the fifth, and pinch hitter Andrew Zitel belted a no-doubt, two-run shot in the eighth.

All nine Mountaineers starters reached base at least once, and eight reached at least twice.

With closer John Murphy not having pitched in four days, Vaughn went to the senior for the ninth, even while trailing by seven runs. His 1-2-3 inning served as a reminder that Maryland’s pitching staff can look better in weekend Big Ten series than it does when using seven pitchers to piece together yet another midweek slog.

“Really, the story was having to get into the bullpen yesterday,” Vaughn said. “Playing a good team like West Virginia today, it kind of puts your backs against the wall.”