Joe Biden should be talking about consent — not mocking it 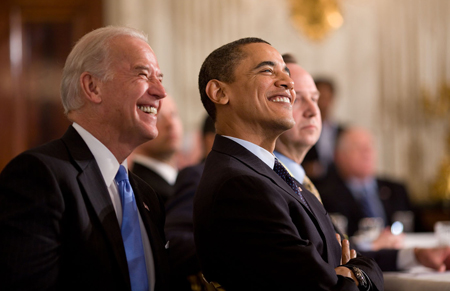 After the 2016 election, Obama-Biden memes — especially ones about trying to keep then-President-elect Donald Trump out of office — were one of the few things that made me smile. They were a wholesome and humorous approach to a horrifying future.

Since then, Biden has stuck with the bit by injecting laughter and charm into his speeches. But it’s not fun — or funny — anymore. Biden’s use of humor has left the realm of endearing and has jumped straight into damaging territory.

On Friday, Joe Biden gave a speech at the International Brotherhood of Electrical Workers’ Construction and Maintenance conference in Washington, D.C. It was his first public appearance since being accused of touching women inappropriately, a topic that he indirectly addressed in his speech. He made small cracks and comments about asking for consent to hug or touch others onstage.

The idea of asking people for consent before touching, especially in a context where one person holds an incredible amount of political and social power, is great. Yet Biden referencing consent as a joke completely undermined any positive effect of his asking.

Making fun of consent, particularly to an audience of mostly men, just leads to complete mockery of the subject and results in people not taking it seriously. It’s impossible to convince people to care about consent when they just find it funny.

The thing is, Biden’s jokes weren’t explicitly offensive. It was more offensive — and, honestly, unnecessary — that he felt the need to make a grand statement about asking to touch these women. That kind of emphasis sounds patronizing and implies that he is only engaging in consensual touch because he is facing allegations. Biden’s comments essentially framed consent as a ridiculous, can-you-believe-we-have-to-do-this-now burden placed on men, rather than basic human decency.

While unwanted physical contact has always been unacceptable, I get that it’s a baffling new concept to older working men — especially white politicians — who have never before needed to respect human boundaries. That doesn’t mean that consent in the workplace is difficult. Don’t touch people, and if you want to, ask. It’s simple. There’s no need for them to make jokes, painting consent as some insurmountable, unreasonable task that has only come about because of younger generations being more sensitive.

Aside from his unneeded jokes, Biden continued to prove himself problematic in situations related to consent when he refused to directly apologize for making women feel uncomfortable. While he was sorry that women felt the way they did, he claimed that he had no bad intentions and therefore had no reason to apologize.

“I am not sorry for anything that I have ever done — I’ve never been disrespectful, intentionally, to a man or a woman,” he told reporters, after cracking jokes.

What Biden doesn’t realize — if not outright disregards — is that having no ulterior motives does not automatically mean that you have not caused negativity or harm to others. He’s wrong in prioritizing his own thought processes; in effect, he refuses to acknowledge that he made women feel uncomfortable to be in his presence, whether or not he meant to.

Sure, he released a video declaring that he’ll be more mindful, but he then didn’t apologize for his actions. It seems as though he’s trying to play multiple sides and pull in younger viewers by acknowledging that consent and women’s safety are significant topics, while also holding onto the attention of older, white male politicians and viewers by refusing to commit to treat consent and his role in it seriously.

But he can’t have his cake and eat it, too. With the looming possibility that Biden may run for president, it’s important to realize the reality of his views and incorporate that knowledge into their voting decisions and political allegiances.