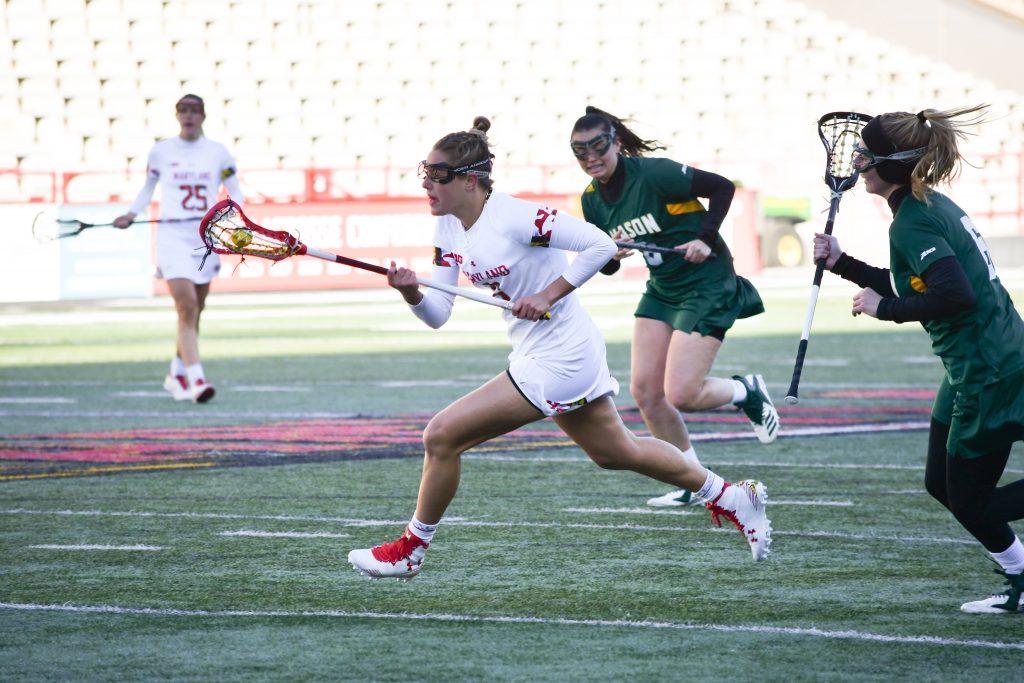 Thirteen minutes into the Saturday evening matchup between Maryland women’s lacrosse and Michigan, the Terps looked frustrated. Maryland had started the game shooting 1-for-6 and nothing was going its way.

Attacker Kali Hartshorn lost out on a draw control with 17:11 remaining and swiped her stick at the air in anguish. Coach Cathy Reese, fresh off her 261st career win, lacked her usual calmness.

Midfielder Jen Giles had a response. On the next possession, the senior received a ball at the top of the arc and went to work. She dodged two defenders and cradled the ball away from another before finishing while falling to the ground.

Giles’ emphatic strike secured a 2-1 lead for the Terps and restored order to what had been a messy start. The score was part of massive first-half run complemented by steady defense and dominance at the draw carried Maryland to comfortable 14-3 win over the Wolverines.

“We just needed to get in our groove,” Reese said. “Once that happened, we started to take an extra second and put the ball around their keeper.”

Maryland conceded the game’s opening goal for the first time in over a month. Michigan midfielder Maggie Kane drove inside the crease, surveyed the defense, and went hard to her left before firing across goalkeeper Megan Taylor for a 1-0 lead.

“We started probably the best we could have,” Michigan Coach Hannah Nielsen said.

The Terps lacked the same intensity of their visitors. The starting lineup — consisting of all 10 Maryland seniors — struggled to gel in the early stages. And even after coach Cathy Reese rotated all the regular starters into the game, the sloppiness continued.

Attacker Caroline Steele forced a shot that flew over the cage. Attacker Brindi Griffin beat two defenders before seeing her shot blocked by goalkeeper Mira Shane. After 10 minutes, the Terps had shot the ball five times, three were on goal and none had gone in.

“We started off a little slow,” Reese said. “Their goalie made some fantastic saves early on.”

But that would soon change. After working the ball around relentlessly, an isolation play produced a result. Steele went one-on-one with defender Sydney Whitaker, wriggled around her, and finished from close range.

The Terps heated up from there. After Michigan committed a turnover close to the Wolverines’ net, the ball made its way to Giles. The senior took it alone, beating four players en route to an easy finish and 2-1 Maryland lead.

Giles also played a key role in the Terps’ third score. She cut right and drew two defenders before throwing a pass across her body to a wide-open midfielder Grace Griffin, who made no mistake from close range.

Goals from Griffin, Giles and attacker Catie May followed, and a 6-0 run in just over six minutes gave the Terps a commanding 6-1 lead with 12 minutes to play in the first half.

Midfielder Erica Evans added the Terps’ seventh in a row from a free position look. Attacker Kali Hartshorn added another with a behind-the-back finish that drew a big response from the Maryland crowd.

“It’s hard to prepare for Maryland,” Nielsen said, “because they have a lot of people who can score.”

Meanwhile, the Terps defense kept the Wolverines out of the game. It forced a series of errant shots, and gifted Taylor easy saves. After Michigan’s first-minute goal, the closest they came to adding another was a shot from midfielder Erin garvey that rattled off the post by way of Taylor’s stick.

“I know they can’t all be All-Americans,” Taylor said. “But in my eyes … I contribute everything I’m able to because of them.”

After Hartshorn capped Maryland’s eight-goal outburst, both teams were scoreless for the final 10 minutes of the first half.

Giles opened the scoring quickly after halftime, taking her defender one-on-one, created an inch of space, and sniped a shot into the bottom right corner for a 9-1 lead.

Michigan pulled one back, but the Terps had done plenty to put the game away. Brindi Griffin scored with 24 minutes remaining, Evans notched her second free position effort of the day two minutes later and they coasted to the finish line.

After Maryland added its 14th of the day thanks to Griffin, Reese began to rotate the squad again. Rather than delving into the younger Terps, however, Maryland put all of its seniors on the field to close out the contest.