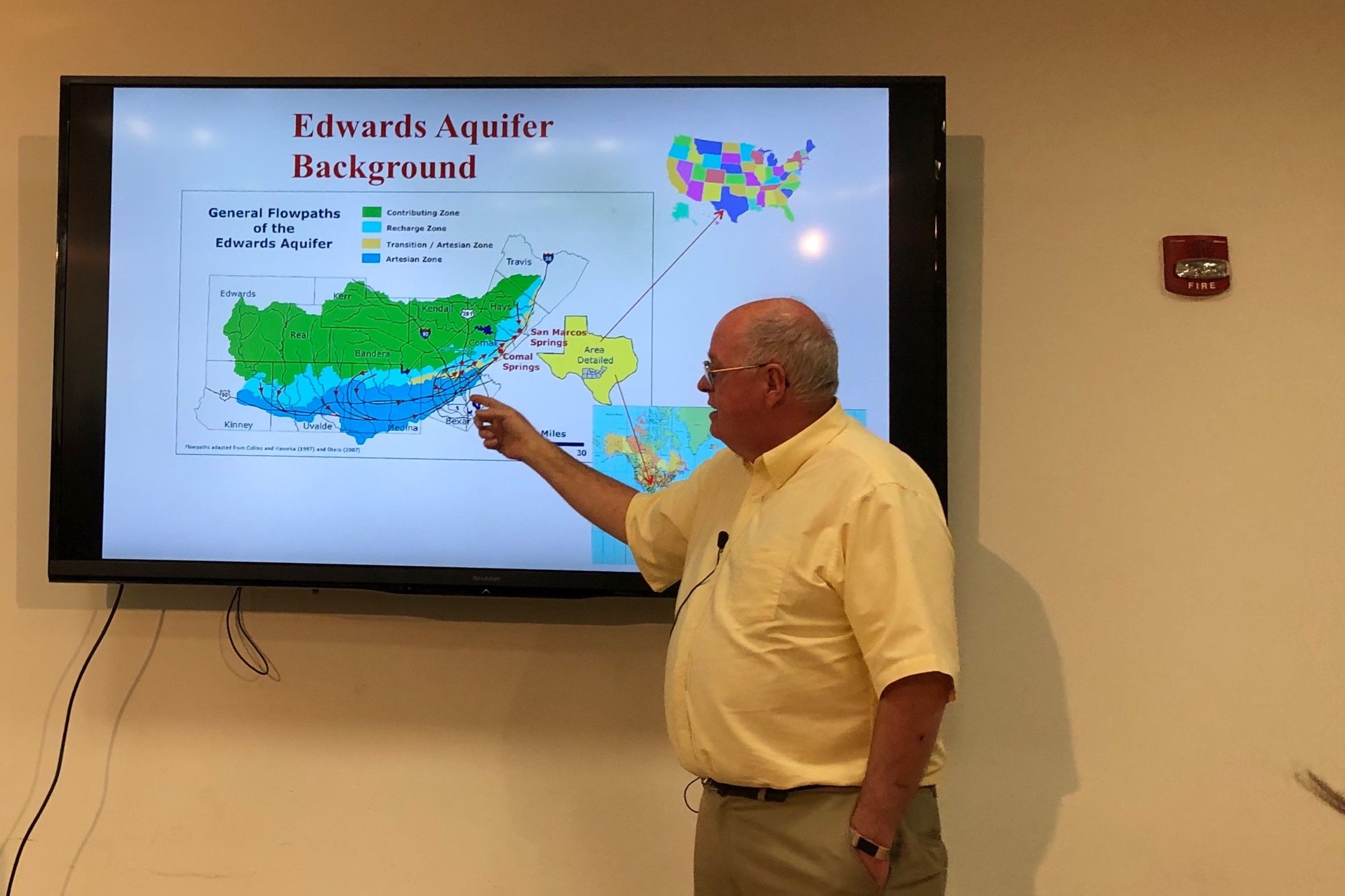 Bruce A. McCarl at the “Economics and the Food Energy Water Nexus” lecture on Wednesday, April 3, 2019. (Photo by Fatemeh Paryavi/For The Diamondback)

By Fatemeh Paryavi
For The Diamondback

San Antonio once relied almost entirely on groundwater to supply its 1.5 million inhabitants. Now, the city is investing billions in water projects — including a nearly 150 mile-long pipeline — to address a growing water shortage in the region.

San Antonio’s looming water crisis is not unique, said Bruce McCarl, an agricultural economics professor at Texas A&M University, who is working on a project to analyze water scarcity in the Texas city.

“The more we wait, the more that it costs,” McCarl said to about 40 attendees at Wednesday’s “Economics and the Food Energy Water Nexus” forum, hosted by the University of Maryland’s public health school.

The solution is “coordinated action” by state and local governments and other stakeholders to address what is becoming a growing problem across the country, McCarl said.

He outlined the intersection of food, water and energy, a complex and thoroughly studied subject, especially as the effects of climate change continue to ravage parts of the country.

“So, ‘coordinated action’ means some way to get one party to act in the interests of another party,” he said. “Perhaps even at their detriment initially, but then you have to somehow compensate whoever’s doing it.”

Kelly Gustafson, a fellow in this university’s Global Stewards program, which studies the intersection of food, water and energy said McCarl’s lecture was “invaluable.”

“Since my research is very much framed around economics, this seemed to be like a very targeted talk for me personally,” said Gustafson, a graduate research assistant in the geographical sciences department. “Essentially, we’re hitting a turning point in the next couple of decades where the food, energy, water intersection is gonna be really impactful for certain regions.”

McCarl said when dealing with issues of this magnitude it sometimes requires larger, wealthier countries to take a loss in order to help the rest of the world catch up.

“As an economist, what we’re basically thinking is that we can take the size of the pie and…  through coordinated action, we can make the size of that pie bigger,” said McCarl, adding the United States cannot be the only country addressing water scarcity and other problems caused by climate change.

Farshid Shoushtarian, an environmental science and technology doctoral student, said he attended the lecture to learn more about the food-energy-water nexus and help his research on water reuse policies. He said he hoped decision makers would devise conservation and water reuse methods to address climate change.

McCarl said he envisions a time when more people come together to work for the common good adding  he hoped students who attended the lecture might better understand the complexities of the issue, and maybe one day contribute to the solution.

“I think just exposing people to some of these issues is pretty valuable,” he said. “I’ve had people in the past that come when I do something like this and they decide to go get a masters in environmental economics.”