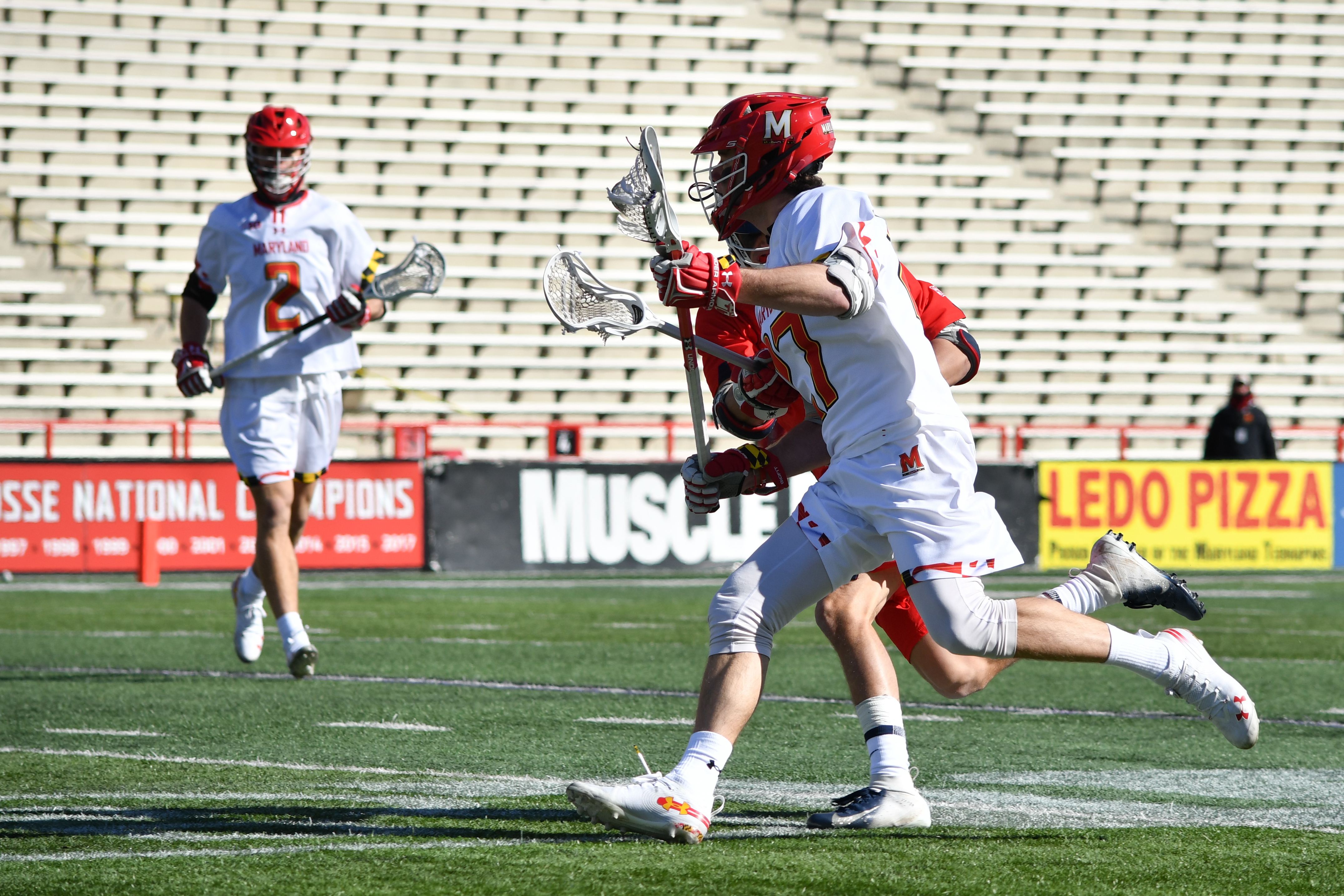 Midfielder Christian Zawadzki looks to dump off the ball during Maryland’s 10-9 win over Richmond at Maryland Stadium on Feb. 9, 2019. (Alex Chen/The Diamondback)

When long-stick midfielder Nick Brozowski and midfielder Christian Zawadzki were honored on Senior Day last season, they reflected on their previous four years. But they also knew there was a lot left to accomplish with Maryland men’s lacrosse.

Brozowski and Zawadzki both served redshirt seasons earlier in their careers while recovering from injuries, and had long planned to return to College Park for their fifth and final years of eligibility.

After having limited leadership roles in their first four years, the duo — the only players on the roster to spend five years at Maryland — is taking an active role in providing guidance to a roster that features a bevy of younger contributors.

“They’re invaluable,” coach John Tillman said. “They’ve been around. They understand the expectations [and] the standards. They don’t get too high or low.”

On Saturday, Maryland will honor its seniors again. Brozowski and Zawadzki will not be included in the pregame celebration, since they opted to be honored last season with their original recruiting class.

But while they won’t be at the forefront of the festivities, the tandem will ensure their presence will be felt after the first faceoff, just as they’ve done all season — both on and off the field.

Brozowski has been a pest on defense and off the wing on faceoffs. He leads the Terps in caused turnovers and has recovered the fourth-most ground balls on the team, even while splitting time at his position with Matt Rahill.

Off the field, Brozowski has also made the most of his opportunities. As one of the team’s captains, he believes his guidance has been his most significant impact on the team. Last season, he mostly deferred leadership responsibilities to his teammates who were playing their last seasons. But now, he’s taking that role head-on.

“I think the biggest transition for me personally is just having more of a voice,” Brozowski said. “Understanding that the younger guys are going to look to me … just being that guy that guys turn to.”

As Maryland was trying to recover from an 8-1 first-quarter deficit against Penn State on Sunday, Brozowski became more animated than usual on the sideline. With the Terps facing their largest deficit of the season against the top-ranked team in the country, Brozowski knew he needed to instill a sense of urgency in the squad if it was to stage a comeback.

The rally fell short, but Maryland took Brozowski’s message to heart and managed to climb within one before eventually falling, 13-10.

Zawadzki, meanwhile, has taken on a different leadership style. He describes himself as less vocal, but still somebody who’s approachable for wisdom and advice when a teammate needs it.

“Being able to learn from being a freshman, to sophomore, to junior, to senior, and learning from each guy — it’s been unbelievable,” Zawadzki said. “They’ve been great teaching us. Now we’re just passing [that] along.”

Zawadzki’s wisdom comes from a place of patience. Unlike Brozowski, who played double-digit games in each of the past three years, Zawadzki has had to bide his time.

After scoring two goals in five games as a freshman, the Kings Park, New York, native tore his ACL and redshirted his sophomore year.

Following his redshirt year, Zawadzki played sparingly the past two seasons. Despite the limited playing time — and a scoring drought that spanned almost four years — he was given a chance to fill an opening in the offensive midfield this season, and he’s taken advantage of it.

Zawadzki has played in all 10 games this year, primarily appearing on the second midfield line, and has scored three goals and recorded one assist. He also has yet to commit a turnover this season, meeting the coaches’ demands of older players limiting mistakes, while younger players are typically given more leeway.

When those mistakes happen, though, those younger players can turn to Brozowski’s vocal leadership or Zawadzki’s insight to keep them motivated and on the right path as the game and season moves forward.

“They kind of look at their legacy as becoming a really important thing,” Tillman said. “Like, how did they leave the program? What kind of impact did they make on their teammates? And you kind of know with them, they’re appreciating every moment because the end is near.”