With a slumping offense, Maryland softball was lucky to avoid a sweep against Ohio State 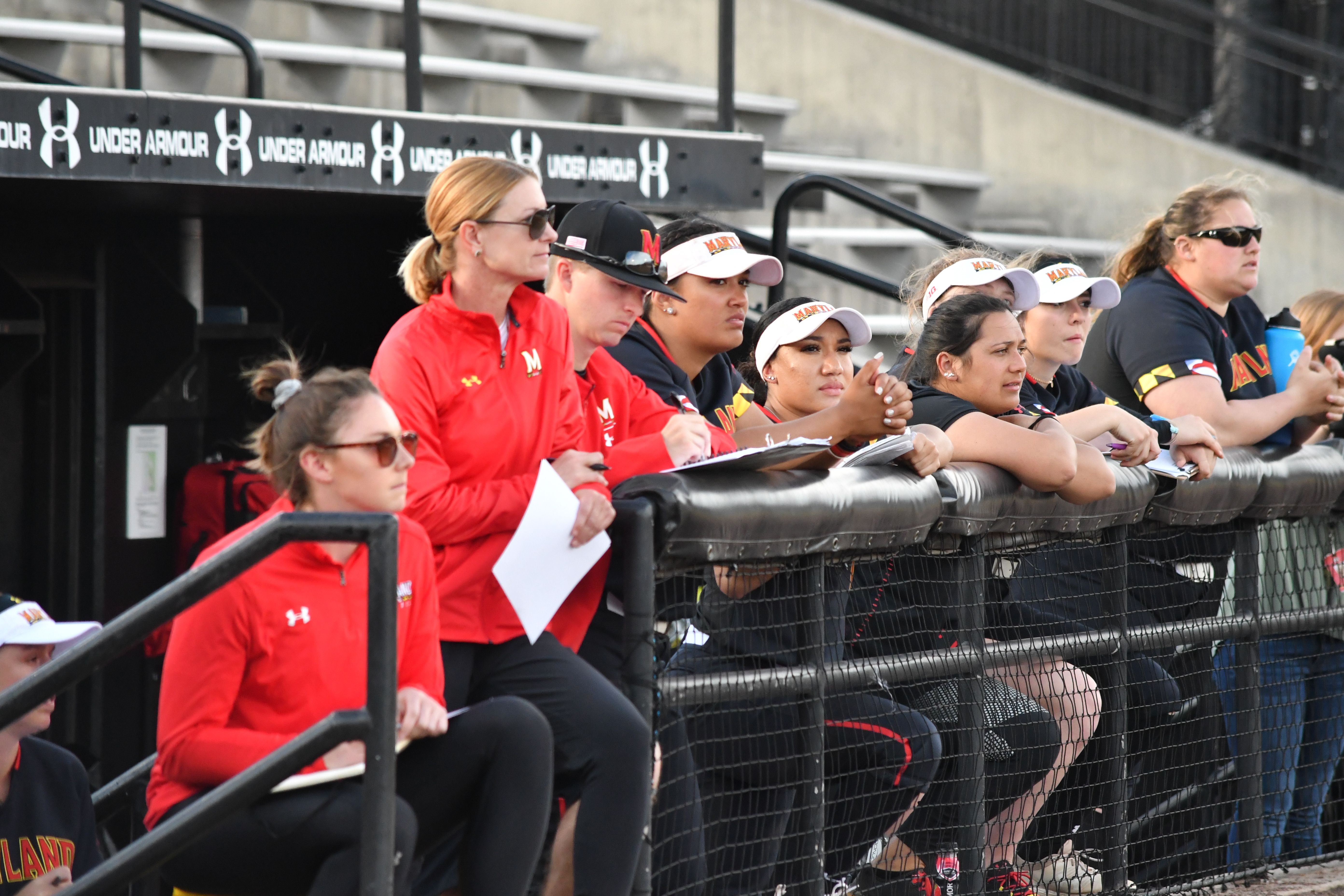 Despite having just three hits in the first six innings against Ohio State on Friday, Maryland softball still found itself with a chance to walk off for its first Big Ten win.

With no outs and pinch-runner Kiana Carr on second base, second baseman Regan Kerr hit a routine ground ball to shortstop Lilli Piper, who threw to first for the out. But Carr pressed the issue, and when first baseman Carley Gaskill tried to fire back across the diamond to catch Carr, her throw sailed far over its target, and Carr came around to set off the Terps’ celebration.

All of the excitement from the walk-off vanished just as quickly as it came, though. Maryland’s offense remained lackluster through the weekend, while the Buckeyes stopped being so generous with free bases and took advantage of Maryland’s own miscues in the final two games.

“If you’ve put that many people on base, it’s really hard to defend it when you give up a double,” coach Julie Wright said after Saturday’s 10-1 loss in five innings. “Offensively we made some things happen … but we need to do a better job at plating runners.”

The two teams combined for only 10 hits Friday night, with Maryland struggling to solve Ohio State starter Morgan Ray, who has a 1.69 ERA. And on Saturday, the Terps once again managed just three hits, this time against right-hander Lauren Rice, whose ERA checks in at 1.99.

On Saturday, Maryland pitcher Sami Main had a disastrous second inning, giving up three hits — two of them homers — along with a wild pitch, a hit batter and two walks before Wright swapped redshirt freshman Victoria Galvan into the circle.

Galvan was initially effective, allowing just one run through the fourth inning. But Ohio State’s firepower caught up to the freshman in the fifth, when she walked four batters as the Buckeyes scored three more to run-rule the Terps.

Early in the year, leadoff hitter Taylor Okada, who led the team in batting average for the first third of the campaign, sparked the Terps’ offense. But with an undisclosed injury still sidelining Okada, Maryland was already shorthanded entering the series.

And the Terps’ lineup took another hit Sunday. Right fielder Amanda Brashear, who’s posted a .314 on-base percentage while starting every game this year, left the rubber match in the fifth inning after running into the outfield fence while trying to catch what ended up as a triple.

After the Terps were swept by No. 11 Minnesota in their first Big Ten series, Wright was proud of her team for playing two close games against Gophers pitcher Amber Fiser, whose 1.59 ERA ranks fifth in the Big Ten.

And though Maryland’s hitters were largely ineffective against Ohio State, Wright again thought her team battled hard against the pitching duo of Ray and Rice, despite missing two key pieces from its lineup.

“Our first few series are brutal [pitching-wise],” Wright said. “The good news I can go in and give our hitters is, ‘Hey, you’re going to get a break to go swing it.’ … That’s a nice relief for them.”