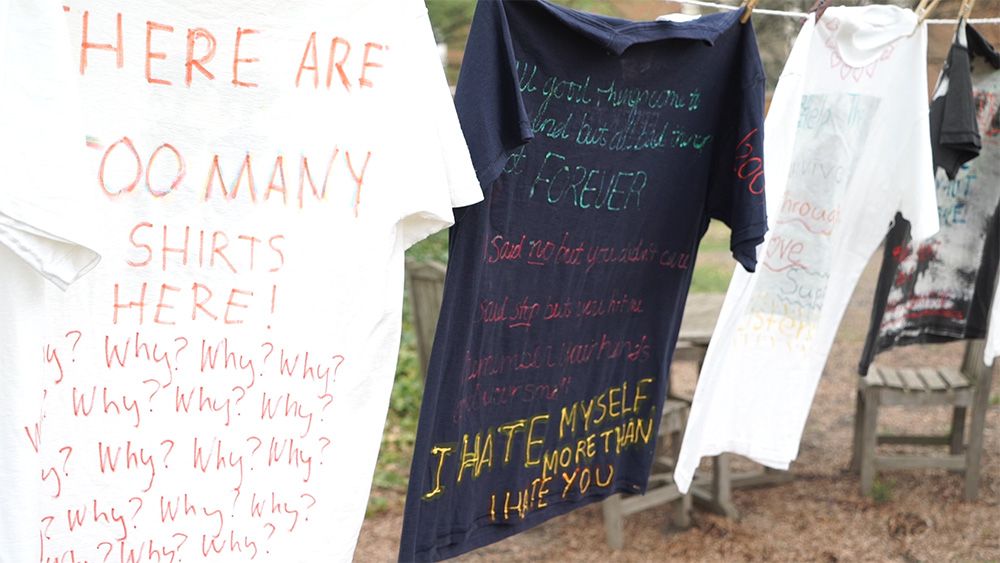 Sexual assault survivors wrote their stories on T-shirts and hung them in Hornbake Plaza on April 12, 2017, as part of the Clothesline Project. (Jay Reed/For The Diamondback)

Greek life — along with college as a whole — is a hotbed for sexual assault. Multiple studies have found that fraternity brothers are far more likely to commit rape than their non-Greek counterparts. The University of Maryland’s Greek life chapters train their members in sexual assault prevention, but only 35 percent of a chapter’s members are required to attend one meeting annually.

Ideally, all of a chapter’s members should be required to participate in this training if they want to remain in the fraternity or sorority. This isn’t a pie-in-the-sky expectation.

The university’s Greek life sexual assault and violence prevention coordinator Lola Taiwo argued the 35 percent attendance rule is enough to disseminate messages about sexual assault throughout each chapter. Yet it seems unlikely that a small group of people are going back to their chapter and teaching everyone else about the issue.

Additionally, while there are concerns about leadership opportunities and attendance within smaller chapters, these arguments aren’t strong enough to excuse exempting up to 65 percent of Greek life from sexual assault training. If the university’s Greek life administrators are worried about taking away leadership opportunities by creating stricter mandates for sexual assault prevention training, then they might want to think about the leaders they’re creating.

There’s no real reason the attendance requirement shouldn’t be increased. Members of fraternities and sororities have spoken about how this training has opened their eyes to problematic behavior, proving these trainings aren’t empty gestures. This could contribute to a great shift in Greek life culture, but that won’t happen unless the entire Department of Fraternity and Sorority Life commits wholeheartedly to this mission.

This also feeds into a larger conversation about the university’s inability to adequately address sexual assault on campus. During 2017-18, there were more reports of sexual misconduct and fewer investigations than previous years. Though the university consistently claims to support its students and condemns acts that threaten their safety, its policy-makers aren’t backing those claims with effective measures. There needs to be a multifaceted approach to sexual assault on this campus, with a particular focus on Greek life due to the higher incidences of sexual assault.

There needs to be sweeping changes to the way sexual assault training and awareness work on this campus. The first step is to require all Greek life members to attend trainings to remain in their chapters. Eventually, sexual assault training should be extended to all students, similar to the way that alcohol education is mandatory for students before attending this university.

Ultimately, the hope is to eradicate sexual assault, which seems more like a dream than an achievable reality. But it’s the mindset that sexual assault is an experience inherent to college life that prevents change. Let’s work on that.