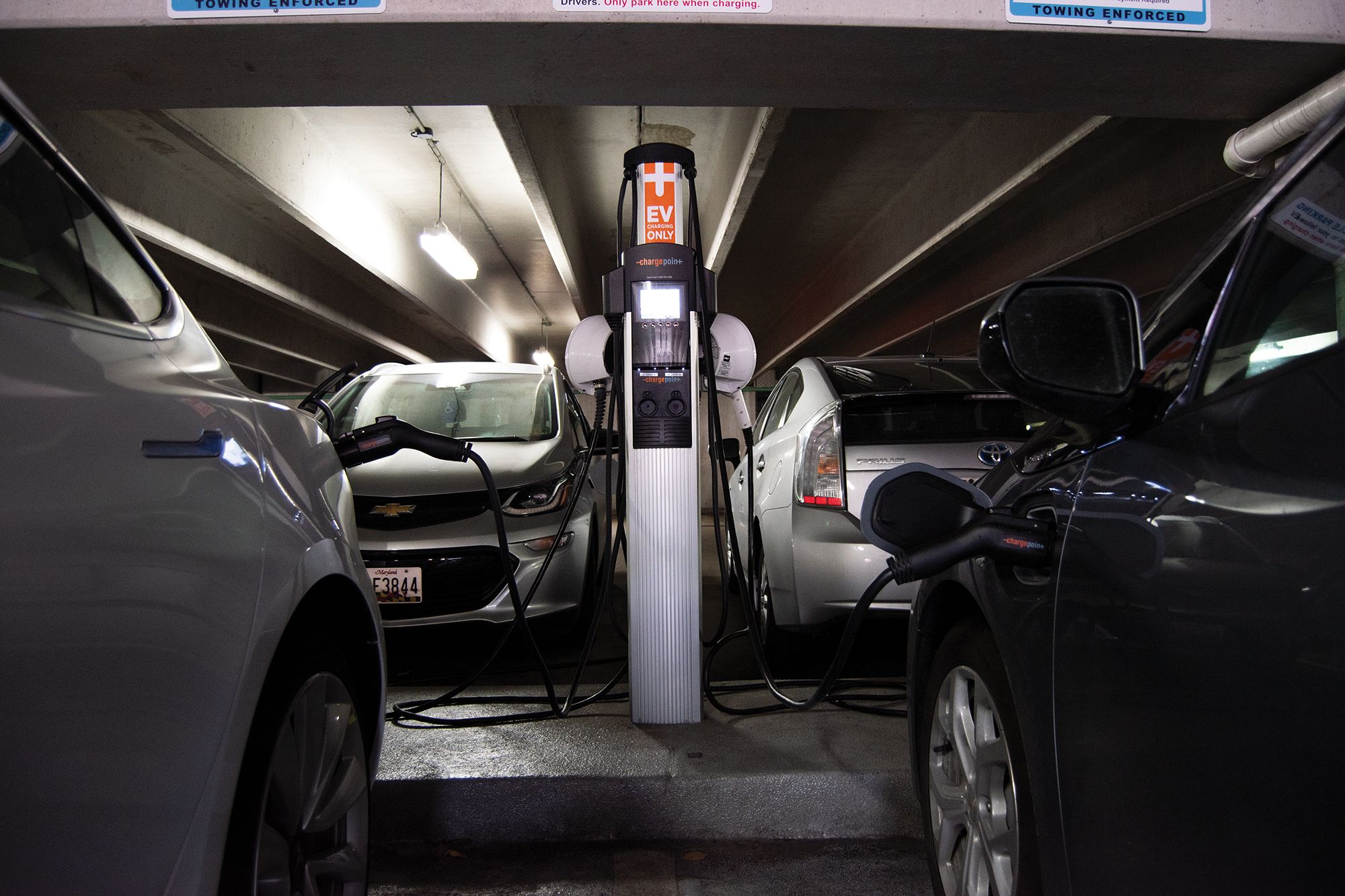 Every morning, David Allen drives his 2017 Chevrolet Volt to the University of Maryland.

But once he gets onto the campus, even Allen — the director of the university’s Department of Transportation Services — has difficulty finding a parking space to charge his car.

“If you’re not here by 9 o’clock in the morning, you’re not going to find one,” he said.

The university has more than 30 electric charging spaces across 17 stations. Many of them are located in Mowatt Lane Garage, or near Eppley Recreation Center. But many electric car owners leave their vehicles in these spaces for the entire day, even when they’re done charging, Allen said.

“I would say by noon, three-fourths of the charging stations that have cars parked there aren’t even charging,” he added. “That’s what we’re trying to wrestle with — how to either incentivize people to move, or require them to move once their car is charged.”

[Read more: A revamped electric car charger is UMD’s Invention of the Year]

On-campus electric charging spaces are free if the car is plugged in while parked. Otherwise, the driver must pay the meter or have a parking permit.

In 2018, DOTS shared a survey with electric vehicle owners to help find a solution to the lack of charging space availability on campus. The survey asked drivers if policies should be implemented to either force drivers to vacate spaces once their vehicle is charged, or require them to pay the standard $3 an hour university parking rate.

“Where we landed with that was that nobody wanted to see additional policy,” said Cara Fleck Plewinski, a DOTS spokesperson.

For now, the department added additional signs around charging stations in October, reminding drivers to be “thoughtful” and “courteous of other [electric vehicle] drivers,” Fleck Plewinski said.

“We would love to have more pumps, and when our budget allows, it is certainly something that we would consider implementing,” she said. “But given our desire to encourage people to practice thoughtful electric vehicle parking, we want to see if that actually resolves the situation before we move toward implementing policy or purchasing more pumps.”

If the issue isn’t resolved by the end of the year, the department will “have to reassess and determine if we do need to implement more policy,” Fleck Plewinski said.

Like Allen, Winter Spray, owner of a 2012 Nissan Leaf, said charging on the campus can be difficult with limited spaces. The junior communication major often plugs in her car when she’s visiting the library or the gym.

“I absolutely love my car,” Spray said. “It’s just the disproportionate amount of car chargers on campus that can be annoying, even though I’ve figured out a system that works for me personally.”

Michael Mckeon, a sophomore psychology and women studies major, rarely runs into charging trouble with his Toyota Prius. Many Prius models run on batteries that charge themselves.

“It’s one of the beautiful things about a Prius,” Mckeon said. “From what I’ve heard through the grapevine, I think UMD is doing a decent job.”

While the university is grappling with a lack of pumps, the city of College Park is satisfied with what it has.

The city currently has charging stations near Davis Hall and in the city parking garage. An electric charging station with two to four pumps is currently under construction at MOM’s Organic Market in the Hollywood Shopping Center, and is expected to be complete by the end of the year.

“At this point, we don’t have any further plans to add any others on city property,” said Kacy Rohn, the city’s community development coordinator. “It’s not something that I personally have been getting a lot of questions about.”

More than 360,000 electric vehicles were sold in the United States last year, and sales increased by 81 percent from 2017, according to Inside EVs, a website that compares electric vehicles and offers information to prospective buyers.

Although Allen hopes to see additional electric charging stations on the campus in the future, for now it is a “courtesy” rather than a responsibility of the university.

“We have looked into some possible sites, but the thought is that we need to make sure that they are being used to the best possible way first,” he said.