Chick-fil-A is still donating to anti-LGBT groups. Why are people still eating there? 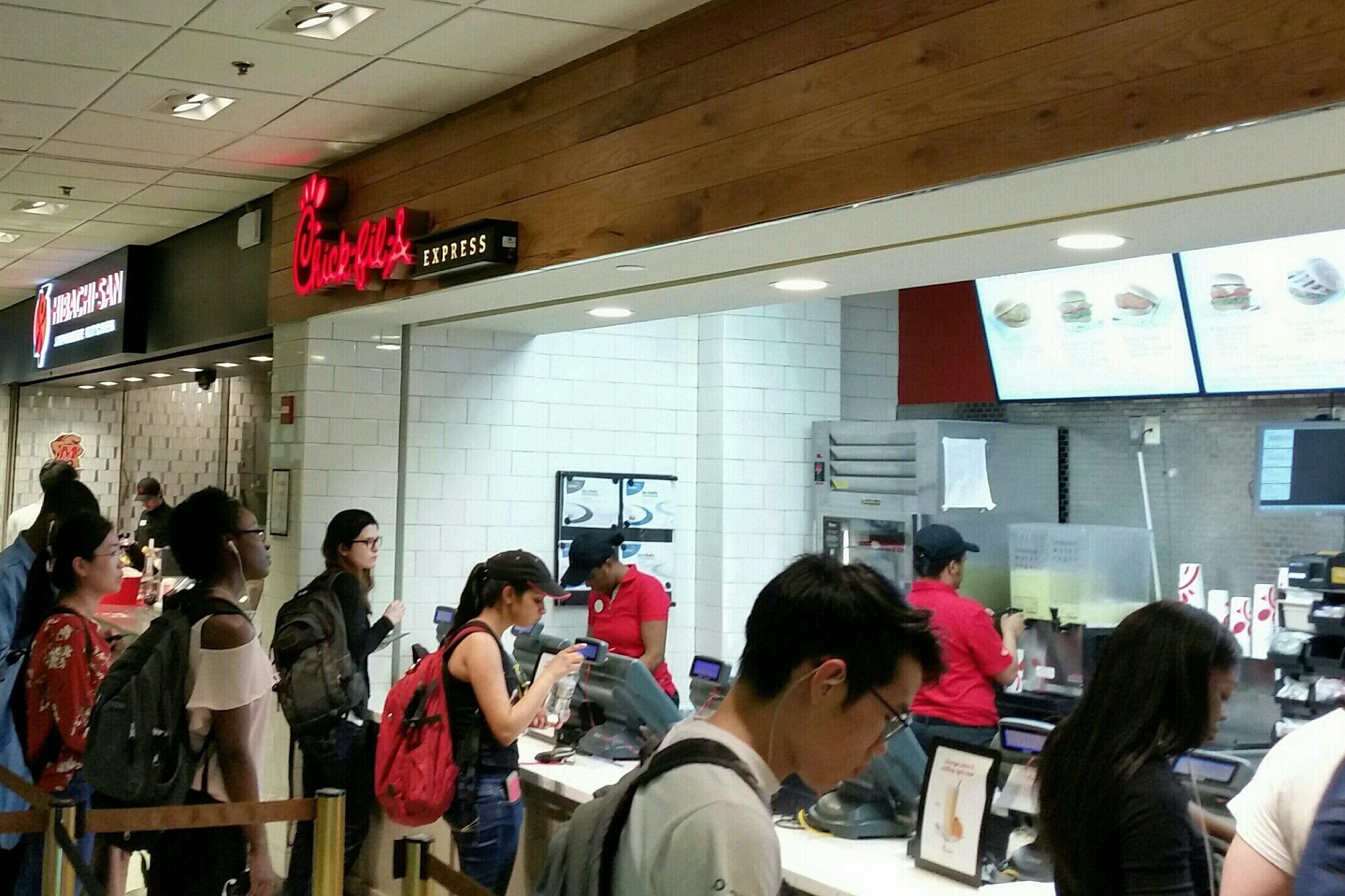 Students wait in line at the Chick-fil-A Express in Stamp Student Union. (Ryan Romano/For The Diamondback)

Chick-fil-A is back under fire for its notorious anti-LGBT stances. Last week, ThinkProgress reported that the corporation’s charitable leg, the Chick-fil-A Foundation, donated over $1 million to groups with anti-LGBT values in 2017.

This is not entirely shocking: Chick-fil-A CEO Dan Cathy publicly stated his opposition to same-sex marriage in 2012. The company as a whole is openly rooted in Christian values — made obvious by their famous “closed on Sundays” rule.

Despite this knowledge of Chick-fil-A’s anti-LGBT history, and the social media backlash that often follows news of their donation records, the fast-food franchise is still incredibly popular — it made more than $10 billion in revenue in 2018.

The University of Maryland’s Chick-fil-A Express, located in the Stamp Student Union food court, opened in 2002. It’s “the most popular outlet in the food court by far,” in terms of both customers and sales, according to Joe Mullineaux, Dining Services’ senior associate director.

Mullineaux said in an email that this particular Chick-fil-A Express location employs more than 60 people and, based on research and industry trends, no other quick service restaurant would “fit into that space and come anywhere near” serving as many guests each day.

[Read more: Why you should stop buying and wearing Supreme]

William Kleyman, a sophomore aerospace engineering major, said he wasn’t aware of Chick-fil-A’s history of donating to anti-LGBT groups. But he said that learning about it doesn’t change his thoughts on the company.

“I mean, I just eat at Chick-fil-a for the food,” he said. “Their policies don’t really change how their food tastes.”

Junior economics major Nicky Motazedi was also unaware of Chick-fil-A’s donation history, but he said he knew the founders of Chick-fil-A are “very heavy church people,” so the information was unsurprising.

“It’s a company’s choice,” Motazedi said. “I like the product and I’m not a political person, so I don’t like to be involved in those things.”

Mullineaux noted it would be difficult to replace Chick-fil-A Express in Stamp. He said sales and guests counts would have to decrease by 65 percent for the restaurant to be considered “no longer viable to operate,” and the replacement process would cost the university about $400,000.

“The [Chick-fil-A] in the Stamp continues to increase sales year after year, while several of the other locations in the food court are experiencing decreases in both guest counts and sales,” he said.

Jasmine Akhtar, a sophomore neurobiology and physiology major, said she eats at Chick-fil-A Express because it accepts Dining Dollars. She said she’s aware of the company’s anti-LGBT history, and doesn’t eat there when she’s away from school.

Akhtar considers herself an ally to the LGBT community, someone who cares about social issues but isn’t very vocal about her beliefs. She said others like her, who eat at the chain despite their progressive beliefs, “probably just think they’re so minuscule in the grand scheme of things that it doesn’t matter, and they enjoy Chick-fil-A.”

Motazedi said he doesn’t personally know anyone who makes an effort to boycott Chick-fil-A, even though he knows people who disagree with their politics. Despite this, he understands why some folks may consider leaving the company behind.

“If that’s something strong to them, all the power to them to support whatever they believe in,” he said.

CORRECTION: Due to a reporting error, a previous version of this story incorrectly stated that Chick-fil-A made $10 billion in profit in 2018. The company made more than $10 billion in revenue. The article has been updated.