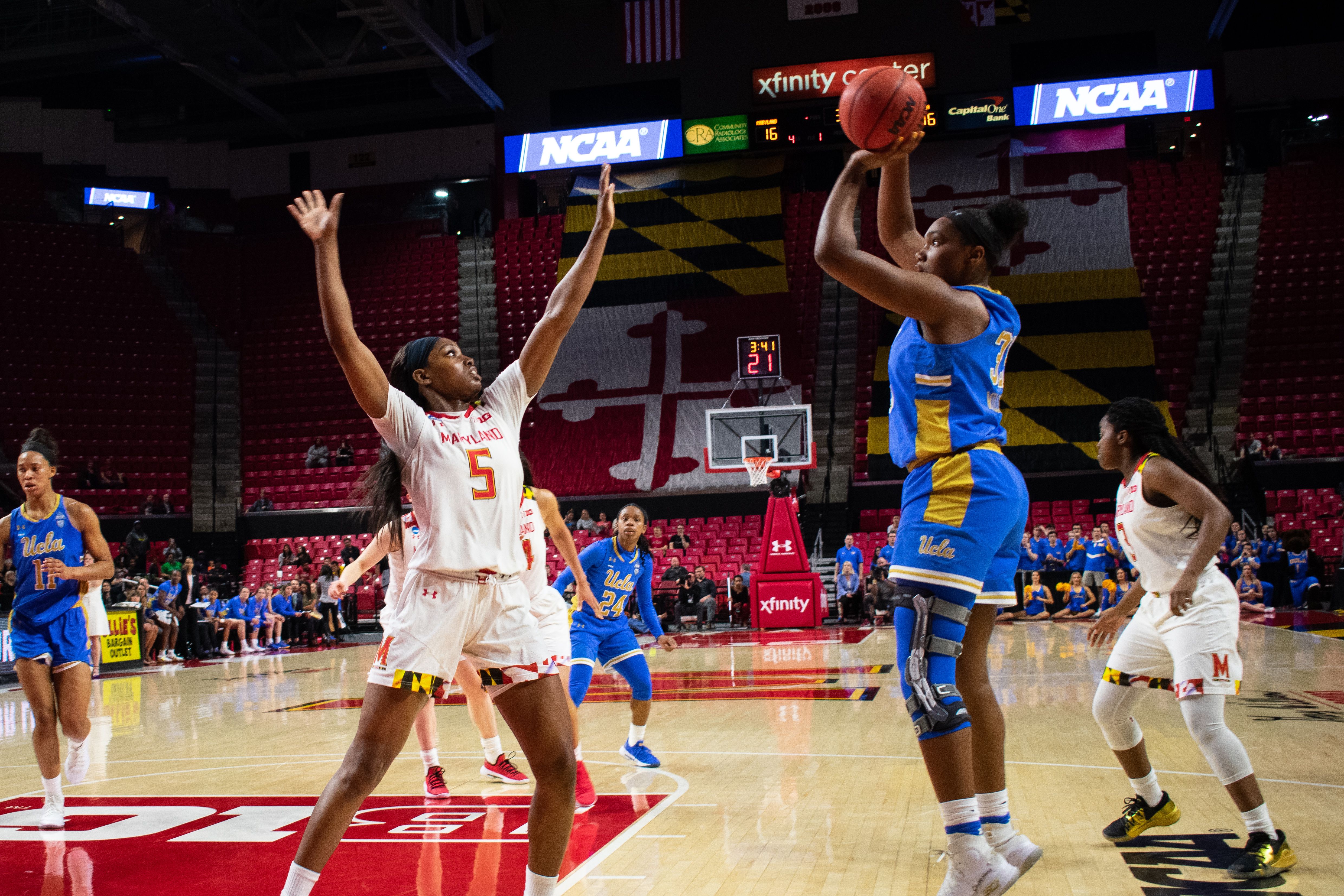 Guard Kaila Charles contests a jump shot during Maryland's 85-80 loss to UCLA in the NCAA tournament second round at Xfinity Center on March 25, 2019. (Tyler Ecker/The Diamondback)

After bricking a jumper midway through the second quarter Monday, UCLA forward Michaela Onyenwere followed her shot and corralled her own miss. Onyenwere missed again, and collected her own rebound again.

She then missed a third time, but teammate Lajahna Drummer was there to grab it — and to dish it to Onyenwere, who finished off the possession by sinking a 3-pointer. The frustrating sequence encapsulated Maryland women’s basketball’s Achilles’ heel throughout its NCAA tournament second-round exit.

The Terps were tested by long, physical frontcourts throughout their Big Ten slate. But none of their conference foes came close to matching the success of the Bruins, who corralled 27 of their own misses despite not using a player taller than 6-foot-1.

While the Terps outshot the Bruins 47 percent to 36 percent, Maryland was bullied in the paint, giving the visitors a 12-shot advantage en route to a 85-80 defeat in the first weekend of the tournament.

“They were crashing the boards, and we just needed to box them out,” Maryland forward Stephanie Jones said. “That’s what it really came down to.”

Prior to Monday, UCLA ranked fourth in the nation with 16.9 offensive rebounds per game — and the Terps allowed 17 in the first half alone. But the struggles on the glass weren’t all that surprising for this year’s Maryland team.

Frese’s teams pride themselves on rebounding, but this year’s group didn’t always live up to the standard set in previous seasons. The Terps hadn’t allowed more than 21 offensive rebounds in a game in the past four seasons, yet had allowed two opponents — Georgia on Nov. 24 and Delaware on Dec. 20 — to eclipse that during the regular season.

With the Bruins being one of the nation’s best offensive rebounding teams, it was a perfect storm of strength against weakness, and UCLA gutted the Terps for 27 second-chance points despite its undersized front line.

Still, UCLA’s output was an anomaly. It had been more than a decade since Maryland surrendered more than 25 offensive rebounds in a game.

“They’re not rebounds that are just coming to big people,” Bruins coach Cori Close said. “Those are all heart and determination and, ‘I will do whatever it takes for the sake of our team.’ And that’s what those young women have shown.”

After Maryland came out slowly, giving up six offensive boards in the first 10 minutes, coach Brenda Frese made a somewhat head-scratching decision to switch her team’s defensive alignment in the second quarter.

Moving to a 2-3 zone exacerbated the Terps’ inability to box out the Bruins’ quicker, more athletic forwards. The 6-foot Onyenwere finished with six offensive boards, and the 6-foot-1 Drummer had eight, knifing through the openings with ease. UCLA had 11 offensive boards in the second frame alone.

“It’s hard to go against people who are taller than me,” said Onyenwere, who also scored a career-high 30 points. “We have great people that really navigate the ball off the rim.”

During halftime, Frese implored her team to be more physical and switched back to man-to-man. It immediately paid dividends, as Maryland used a pair of steals to sprint out to a 7-0 run and take a 47-44 lead.

“Coach just challenged us to be tough,” said guard Kaila Charles, who scored a team-high 23 points. “They were crashing really hard, being really aggressive on the offensive boards. So she challenged us to lock in on defense, box out.”

But Maryland folded late, and a 19-9 final period prevented the squad from capitalizing on the impressive third quarter.

The rebounding failures earned the Terps more time to stew over their faults, with another season punctuated by a handful of significant shortcomings and ending with an early postseason exit.

When asked what they plan to work on in the summer to avoid a similar fate next season, Charles and Jones didn’t single out any specific area to improve. The pair answered almost in unison.