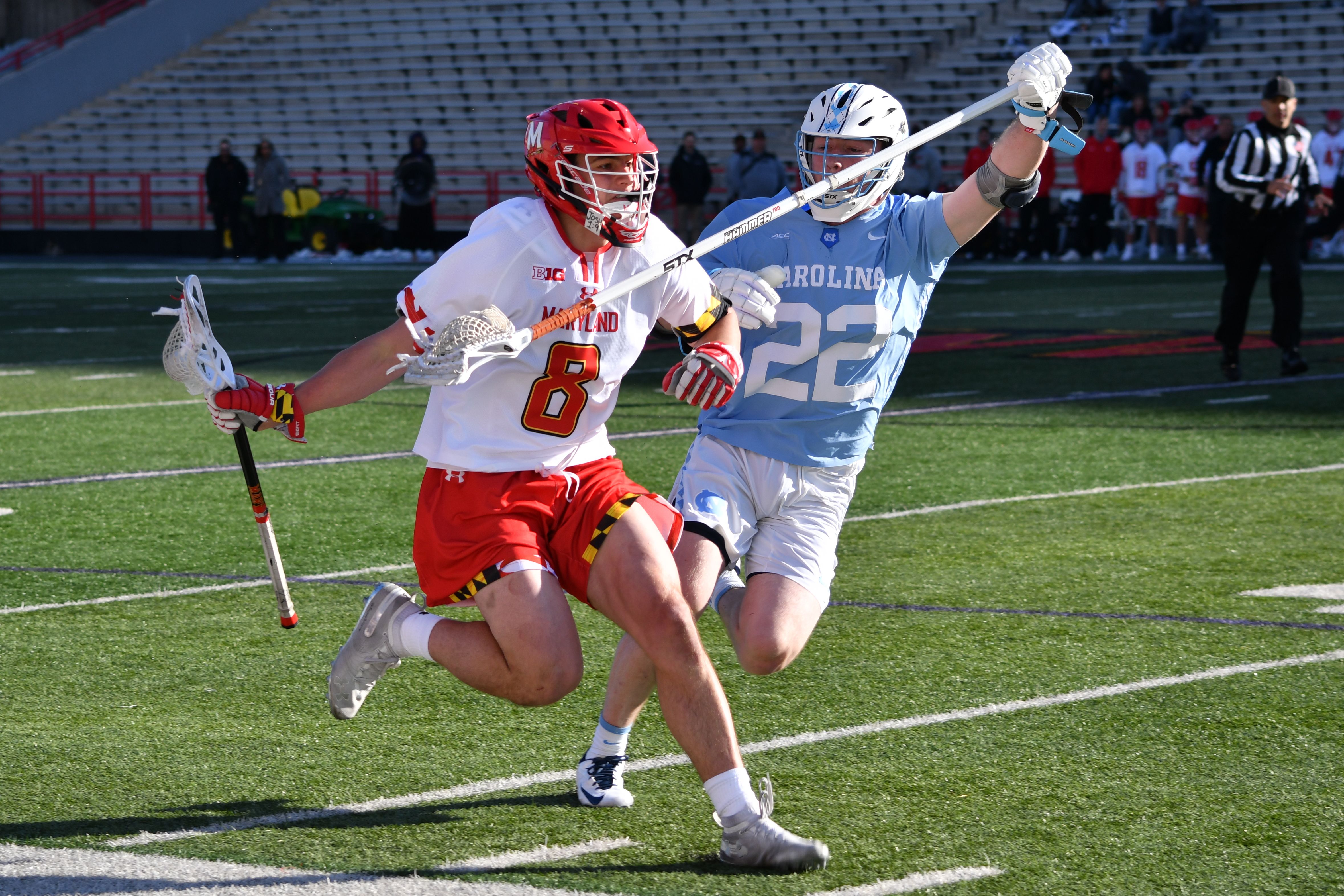 Midfielder Roman Puglise tries to keep the ball away from a defender during Maryland's 16-9 win over UNC at Maryland Stadium on March 23, 2019. (Alex Chen/The Diamondback)

The midfielder used a swim move to free himself at the front of the crease, where Tar Heel defender Jack Rowlett slid over and laid him out, with an emphatic hit that drew the ire of the Terps’ sideline.

The hit left DeMaio on the turf, in need of attention from the trainers. Though DeMaio said he was OK postgame, it served as the final blow in a game that was physical on both sides.

No. 19 North Carolina’s physicality gave the No. 4 Terps some trouble. But it also provided openings that coach John Tillman’s team exploited with increased passing and off-ball movement.

“We kind of talked about this [being] the most athletic team we played,” Tillman said. “We were like, ‘Listen, it’s going to take us a little bit longer to get leverage … so just don’t get frustrated.’”

North Carolina’s defense matched what the Terps had prepared for throughout the week — heavy checking, playing tight on-ball defense and congesting shooting and passing lanes.

“We knew they were trying to get to hands; they were heavy checkers. When we got to the middle, they were going to back check us,” attackman Logan Wisnauskas said. “We kind of knew going in.”

The Terps’ gameplan to counteract the aggressive defense emphasized quick, decisive ball and player movement to create the open looks North Carolina prevents against teams that use an isolation, one-on-one style on offense.

[Read more: No. 6 Maryland men’s lacrosse scores most goals this season in 17-7 trouncing of Villanova]

Tillman said his offense was stubborn at times, taking difficult shots when there weren’t legitimate openings. He pointed to easily-blocked shots from midfielders Bubba Fairman and Kyle Long.

“In a game like this, where they have really good athletes, we were going to have to attack them six-on-six,” Tillman said. “Make sure we keep that ball hot, two or three seconds in your stick, and move and move.”

That message came to fruition just after DeMaio scored Maryland’s second goal. The Terps poured in nine of the next 11 goals to close out the first half, with each of those scores coming off an assist.

During a dominant 7-1 second quarter, Maryland’s extra-man unit made North Carolina pay for the times its physicality crossed the line. The Terps converted two of their three extra-man chances, with attackman Jared Bernhardt and midfielder Will Snider cashing in on the six-on-five looks.

The final goal of the first half came off a well-timed lob pass from Long to the interior of the defense, finding attackman Louis Dubick cutting to the net. The pass made its way through the Tar Heels’ skyward sticks and to a leaping Dubick, where he gathered the pass and netted the goal before landing.

North Carolina’s aggressive approach paid dividends for some stretches. The Tar Heels prevented Maryland from clearing three times, forcing them into a season-high 19 turnovers — one game after committing a season-low 11 turnovers against Villanova.

But even as North Carolina forced mistakes and ramped up the pressure in the second half, Maryland’s balanced attack provided the separation and preempted any North Carolina rally.

It was the difference in the 2019 iteration of the annual rivalry matchup, which Maryland has gone 6-1 in since leaving the ACC.

“We had a game plan going in [and] we executed the game plan,” DeMaio said. “Just being unselfish, just playing together and playing well as a group.”