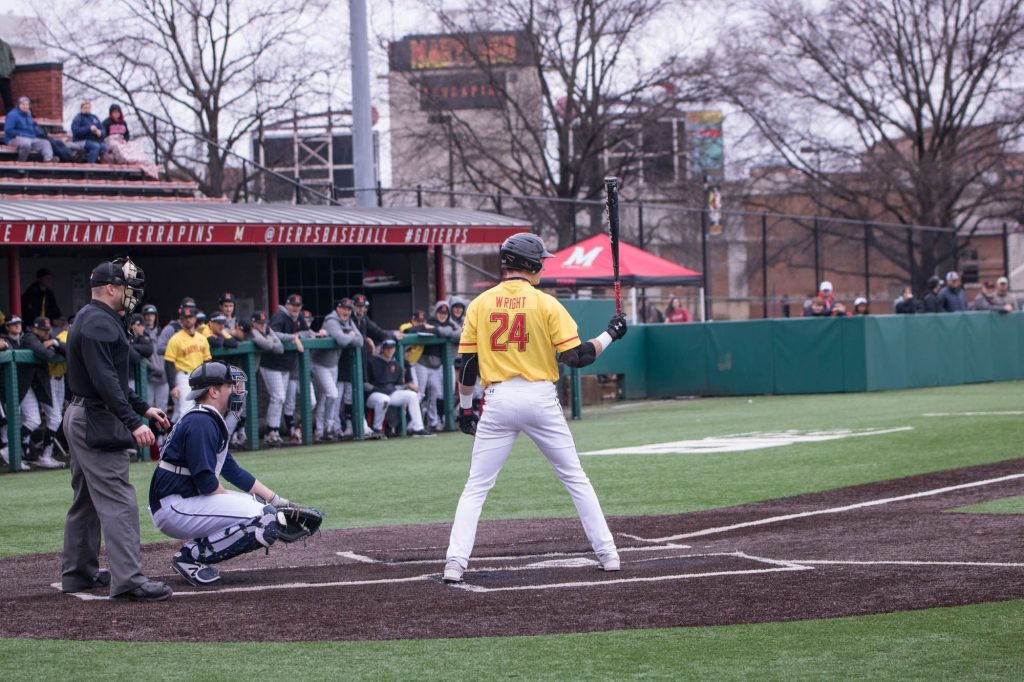 When right-hander Trevor LaBonte exited in the fifth inning against Creighton, Maryland baseball still had a chance to get its first win at Bob “Turtle” Smith Stadium since March 5.

While the Terps had struggled to score in their first two games against the Bluejays, they were only down 1-0 after the first five frames, thanks to a standout effort by the freshman starter.

But by the time Maryland’s offense broke out in the ninth inning, the team’s pitching staff had given Creighton a seven-run lead. Without enough offensive firepower to mount a rally, the Terps suffered an 8-6 defeat to seal the series sweep.

In what seemed to be a pitching duel early, Maryland’s bats struggled. Senior right-hander Evan Johnson had his best start to date for the Bluejays, giving up just two hits over six shutout innings.

LaBonte’s day got off to a rough start. Second baseman Isaac Collins led off with a triple, right fielder Will Robertson brought him home with a single to right-center and a pair of walks loaded the bases.

But the freshman escaped the jam and clamped down after that, striking out eight batters and giving up only two more hits the rest of the game.

The score remained at 1-0 until the top of the seventh, when Maryland’s bullpen began to unravel. After giving up back-to-back doubles to start the inning, left-hander Tuck Tucker was pulled for right-hander Will Glock, who promptly allowed a two-run homer to designated hitter Jake Holton.

Glock was able to strike out the next two Creighton batters, before issuing a walk to third baseman Jordan Hovey. Coach Rob Vaughn replaced him with southpaw Billy Phillips, but the Bluejays pinch-hit for the left-handed Evan Spry with the right-handed Jason Allbery, who hit another double to plate Hovey.

In an effort to stop the Bluejays offense, Vaughn brought in senior closer John Murphy for the eighth. The right-hander hadn’t pitched since the previous Sunday, and he seemed to be rusty, giving up a leadoff single to center fielder Will Hanafan and doubles to Collins and Robertson.

Despite Murphy’s rough performance in the eighth, he only gave up one run, receiving much need help from his teammates gave him. Catcher Justin Vought caught Hanafan stealing second for the first out of the inning, and shortstop AJ Lee threw Robertson out at third as he tried to stretch his RBI double to a triple.

In the bottom half, the Terps were finally able to get on the board. After a double and a pair of free passes loaded the bases with no outs, left-hander Ryan Connolly fanned third baseman Taylor Wright and first baseman Maxwell Costes, but Lee worked a full-count walk to bring in second baseman Tommy Gardiner.

Unfortunately for the Terps, that glimmer of offense was met by the Bluejays in the top of the ninth, as Hovey launched a two-run homer over the right field wall to expand their advantage to 8-1.

In the bottom of the ninth, the Terps got the offense they had been missing so much. Left fielder Caleb Walls and pinch-hitter Michael Pineiro drew walks to start the inning, and following a fielder’s choice from Gardiner, Maryland got RBI doubles from right fielder Randy Bednar, center fielder Chris Alleyne and Wright.

With its lead trimmed to 8-5, Creighton put in right-hander Dylan Tebrake in an attempt to stop the bleeding. Tebrake got Costes to fly out to center, before Lee knocked in Wright with a single, bringing the tying run to the plate.

Vought swung at the first pitch he saw and popped up to first base for the final out, capping off the Terps’ second straight home series sweep.