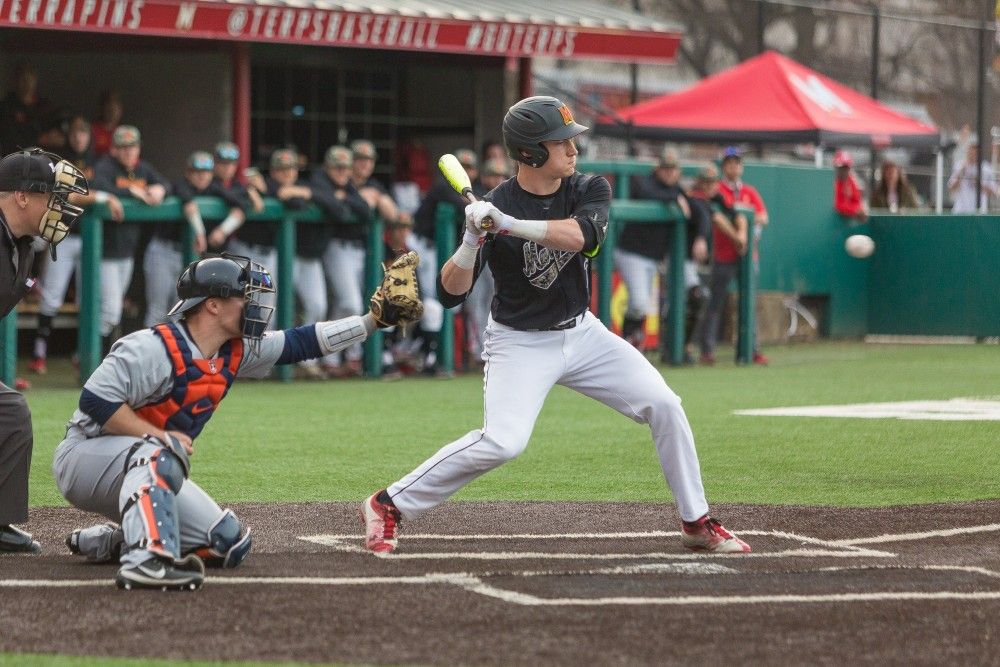 When catcher Justin Vought swatted a three-run homer to left center in the sixth inning Saturday, it seemed to be the spark that Maryland baseball needed.

After stranding seven runners through the first five innings against Creighton, the Terps had finally broken through. Vought’s game-tying blast got the sparse crowd at Bob “Turtle” Smith Stadium on their feet and appeared to tip the momentum in the home team’s favor.

But Maryland’s bats went quiet after that, and its bullpen couldn’t fend off the Bluejays, who scored two runs in the eighth to deal the Terps a 5-3 loss in the second of the three-game set.

While Maryland had 16 total baserunners — seven hits, six walks and three hit batters — Creighton’s pitching staff worked its way out of trouble for the second straight game. The Terps stranded eight runners in a 3-2 defeat on Friday and left 11 men on base Saturday.

Center fielder AJ Lee led off the first with a double down the right-field line, but a popup from right fielder Randy Bednar and a strikeout from third baseman Taylor Wright kept him at second, before first baseman Maxwell Costes lined out to end the inning.

In the bottom half of the inning, left fielder Caleb Walls lined a double into left field, then stole third. But Lee hit a grounder to third baseman Jordan Hovey, who looked Walls back to the bag before throwing to first for the out. After Bednar walked to put runners on the corners, Wright flied out to center to end the threat.

The Bluejays added another run in the fifth on a squeeze from shortstop Jack Strunc. The Terps couldn’t capitalize on another scoring opportunity in the bottom of the frame, with Costes grounding out after an intentional walk to Wright that loaded the bases.

Maryland put another two men on base in the sixth, prompting Creighton to bring in right-hander Jonah Smith from the bullpen. Vought turned on Smith’s third pitch, and the ball just cleared the fence in left-center to tie the score at 3-3.

But the Bluejays pulled ahead in the eighth, thanks to sloppy play from the Terps.

After a pair of free passes to Strunc and first baseman Jason Allbery, pinch-hitter Evan Spry worked the count full against right-hander Daniel O’Connor before lining an RBI single to center field, Spry’s first hit of the season. Lee misplayed the ball, allowing Allbery to advance to third.

The next batter, center fielder Will Hanafan, laid down an 0-2 squeeze attempt. Vought tried to get the out at home, but he lost the ball before tagging Allbery, extending Creighton’s lead to 5-3.

The Bluejays kept Smith for the ninth — his third full inning of work — and he appeared to be running out of steam, hitting Lee and giving up singles to Wright and Costes. But with the winning run on first and two outs, second baseman Tommy Gardiner looked over a called third strike, and Creighton escaped with the win.