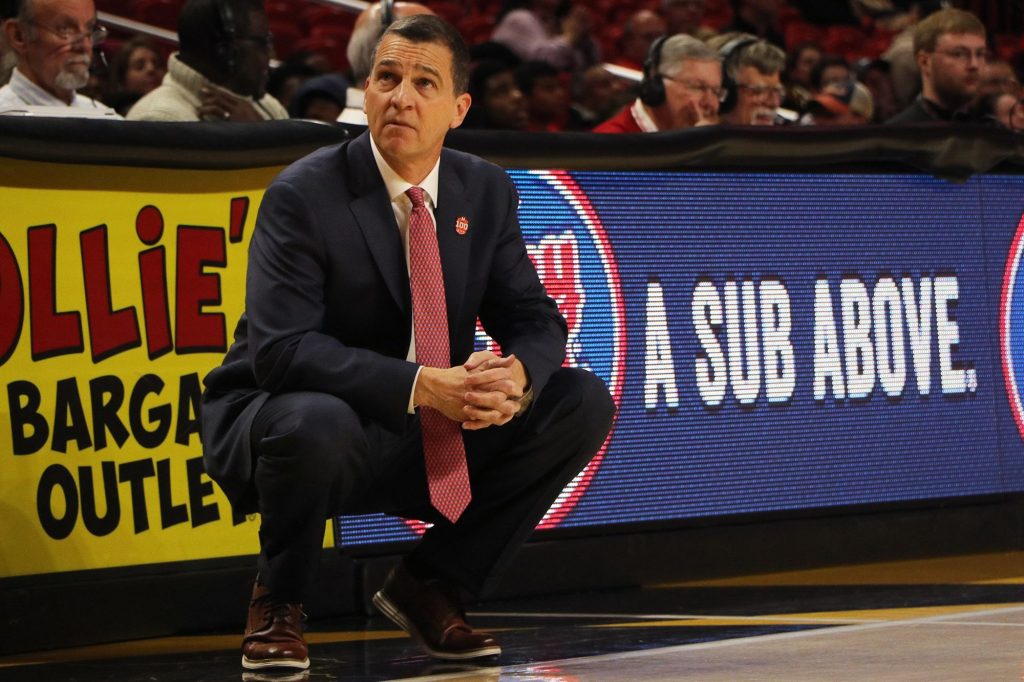 CHICAGO — Guard Anthony Cowan walked toward his bench with his hands on his head Thursday as Maryland men’s basketball coach Mark Turgeon continued venting his frustration at a referee.

There was plenty to be vexed about — an anemic shooting performance, poor box outs and lengthy scoring droughts, to name a few — but this outburst marked the end of a Terps run that drew them back within nine points during their Big Ten tournament opener against Nebraska.

Guard Darryl Morsell was out in transition, contending with two Nebraska defenders as he sprinted to the rim. Morsell missed the layup, and the Huskers started to break the other way before Turgeon’s fit of anger ended the play with a technical foul that kicked off a 5-0 Huskers run Maryland never recovered from.

For much of the second-round matchup against the Huskers, Turgeon was left frustrated by his team’s ugly performance. And when the buzzer sounded on a 69-61 defeat, he had lost three consecutive Big Ten tournament openers.

“We weren’t in it today. We just didn’t play well,” Turgeon said. “I can’t explain it.”

Two minutes into the contest, after Huskers forward Thorir Thorbjarnarson picked off a pass and was fouled on the other end, Turgeon yelled at his team to “Wake up!”

But the Terps never broke out of their stupor.

The Huskers employed a zone early and clogged the paint. Eliminating forward Bruno Fernando and Cowan forced forward Jalen Smith and Morsell to shoot from outside.

“It felt like they had an extra defender in driving lanes,” Cowan said. “We just got to be better.”

Morsell hit a 3-pointer for his team’s first points after nearly three scoreless minutes, and Smith gave the Terps a one-point lead with 12:30 before halftime.

But after guard Eric Ayala tied the game at 14, Nebraska embarked on an 18-6 run entering intermission, ripping apart a lackluster Maryland defense and having no trouble stopping a listless offense.

“We are talented. We can play with anybody,” Ayala said. “But it’s the little stuff in a college basketball game that are the major keys.”

Smith threw down an alley-oop with five minutes to go, but Huskers star James Palmer followed it up with a triple — part of his game-high 24 points — to continue willing his team through the conference tournament.

About a minute later, Thorbjarnarsona caught a feed on the right wing, then looped his way past Cowan unabated for an easy layup. After Fernando got on the board with a three-point play just before halftime, two straight turnovers prevented the Terps from cutting their deficit to single digits.

When Fernando was doubled on the block with 34 seconds left, he threw the ball away. Then, with a chance at one last shot, Cowan lost his dribble, and the Terps entered halftime trailing, 32-20.

“Just not executing,” Morsell said. “Not being patient offensively.”

After Fernando’s turnover to open the second half, though, Maryland used a 9-0 run to narrow the deficit to 35-30.

The Huskers’ edge jumped back to double digits, however, with a 9-0 run in a two-minute stretch as Palmer and forward Isaiah Roby got going again and Maryland went cold once more.

During a five-minute rut without a field goal, Ayala drove baseline and attempted a one-handed jam in traffic, only for the ball to rim out. Morsell converted an and-one to end the stretch and bring Maryland within nine, but Turgeon was called for the crucial technical after another Morsell transition effort.

“I just got on the floor too much,” Turgeon said. “Shouldn’t have done it. I thought Darryl got fouled, but they didn’t. That’s really what matters. Shouldn’t have got the technical.”

Though Ayala said the technical “lit a fire” under him, it didn’t translate to the scoreboard. Huskers guard Glynn Watson nailed both free throws, Roby had an and-one on the ensuing possession to take an 14-point lead and Maryland struggled to stay close the rest of the way.

Morsell — the team’s defensive specialist — finished with 14 points on 6-for-13 shooting, while a late push from Cowan brought the junior to 18. Fernando finished with three on just four attempts.

As Nebraska slowed the game down each offensive possession for the last six minutes — shortening the game and keeping its players fresh — it grew difficult for Maryland to tighten the scoreline. Palmer nailed a three with less than two minutes left, sending his bench into an uproar, and walk-on Johnny Trueblood scored a wide-open layup shortly after, with Maryland in desperation mode.

With a lifeless performance against a team missing significant pieces of its best lineup and with only seven players altogether, Maryland crashed out of the Big Ten tournament for the third straight year.

“I’m disappointed,” Turgeon said. “We just did not have it, couldn’t get it going, and if we did for a minute or two, we couldn’t sustain it.”