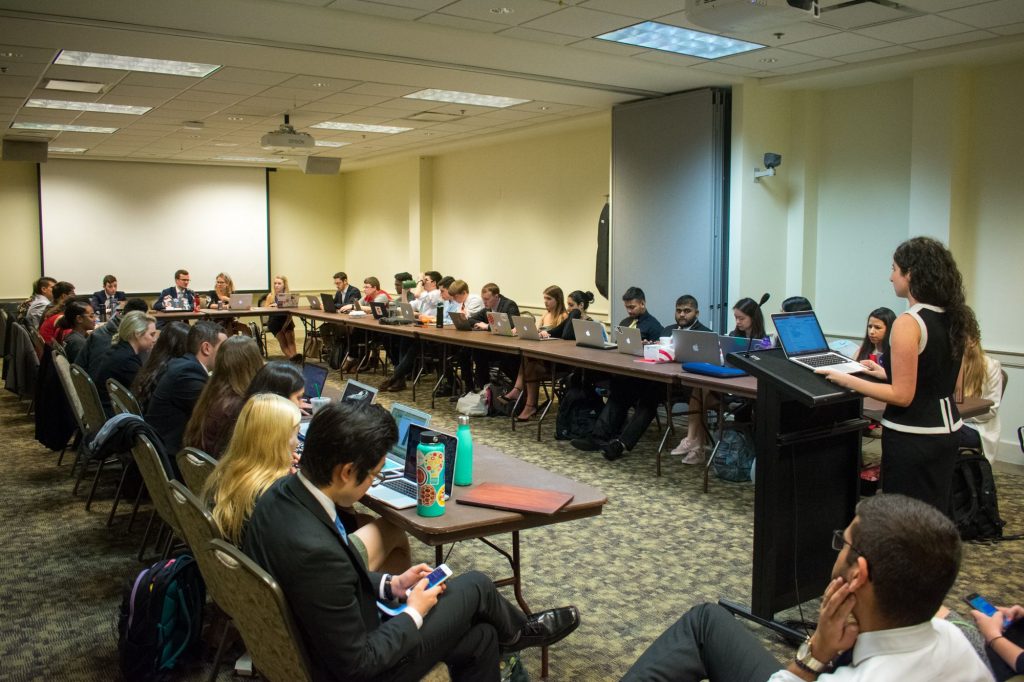 The SGA convened on April 25, 2018 for its annual omnibus meeting (Elliot Scarangello / The Diamondback)

Last semester, the University of Maryland’s SGA voted to establish black and women’s caucuses to discuss issues and bills relating to their respective groups. So far, though, neither have had any input.

The groups, a formalized way for female and black students to give their insights on initiatives affecting them, began meeting at the start of this semester — but both have yet to encounter bills that they feel need their voice.

Meriam Mossad, who serves as the chair of the women’s caucus, said they haven’t needed to edit bills to amend them for exclusionary language because the bills the Student Government Association has recently debated — ranging from a resolution supporting an expansion of veteran tuition benefits to reinstating the WTFUMD program — haven’t required it.

“The legislators that write these bills are pretty aware of inclusive language and [use] more broad terms to include all the undergraduate students,” said Mossad, a senior government and politics major.

Until the body needs input from her caucus, Mossad wants to start “side projects” with the group to address gender issues on the campus. In the next few weeks, she plans to send students a poll about gender-related discrimination they have encountered at this university to determine the issues the caucus should be addressing.

Though she doesn’t yet have specific projects in mind, Mossad cited sexist language that appeared in the computer science department’s teaching assistant handbook last year as an example of issues the caucus wants to address. The handbook had separate sections addressing the way male and female TAs should expect their students to interact with them based on their gender.

For now, the caucus meets on Thursday nights and has about 25 members that rotate in each week. Male members also attend, although only one or two of them per week.

“I definitely hope in the future to have higher turnout from men,” Mossad said. “It’s great for women to be empowering other women, but if men aren’t also a part of this conversation, it can slow down the process.”

While the women’s caucus has been successful in getting started, the black caucus has struggled to get off the ground, said black caucus chair Maleeha Coleburn. The group has had just one meeting — which had about five attendees — since its creation at the start of the semester.

Coleburn attributes this lack of action to black students feeling underrepresented and decreasing retention from last semester’s excitement when the bills were first introduced. Because of this, she said, she’s planning on promoting the group as the “the multicultural caucus” to include other students of color as well.

“The issue that we’re facing is that there’s not really any black students in SGA,” the junior government and politics and public policy major said. “My goal is to focus on every student of color and promoting what they need.”

Serena Saunders, who sponsored the women’s caucus and co-sponsored the black caucus bills, said the SGA has an “internal culture problem.”

“We don’t really value the minority voice in the room as much as we nearly should,” Saunders said. “I think that we are a very diverse organization numerically, but that doesn’t often reflect who speaks during meetings, who feels supported with their initiatives.”

To increase involvement and student voices on multicultural issues, Coleburn plans to reach out to students of color and black student groups and encourage their members to serve on SGA committees. She has yet to determine which groups that would be, she said.

This university enrolled 30,762 undergraduate students as of fall 2018, and 11.6 percent of them were African-American, according to the Office of Institutional Research, Planning and Assessment. Black enrollment saw a marked decline in 2018, with African-American freshmen making up the smallest portion of the freshman class in decades.

Coleburn said the events of the past few years have made black students feel ignored. She highlighted the deaths of two young black men in the past two years — Bowie State student Richard Collins, who was stabbed on this university’s campus in May 2017, and Maryland football player Jordan McNair, who suffered fatal heatstroke at a team workout in May 2018.

“There’s definitely been a lot more racial tensions on campus,” she said. “I think having students of color involved in SGA is really important in shaping what SGA does.”