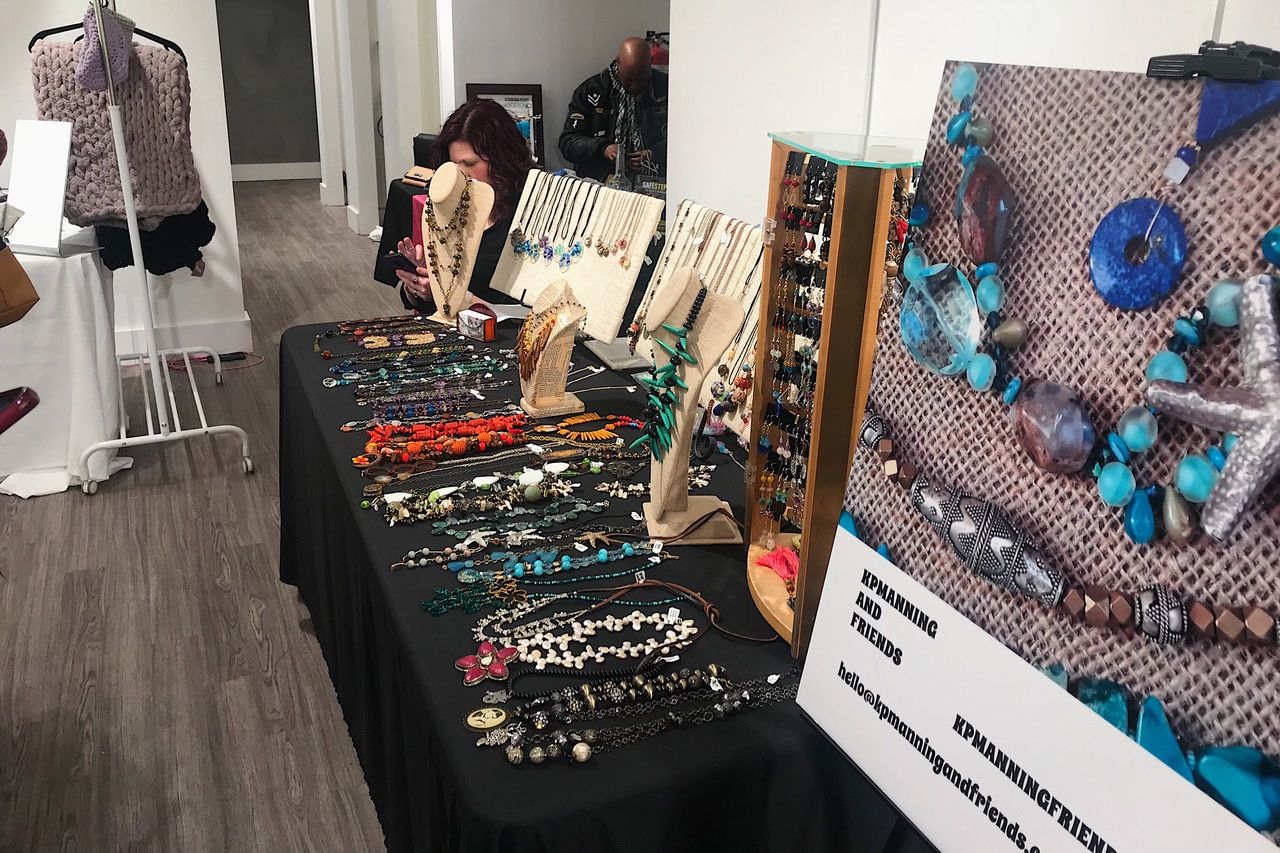 Women artists sell jewelry at the Women in the Arts Pop Up Festival hosted by D.C. Swim Week (Morgan Pravato/For The Diamondback).

International Women’s Day is a much-needed 24 hours of recognition — or a sad, “snowflake” ploy, depending on who you’re asking. Either way, countless people have come to the consensus that March 8 should be dedicated to celebrating female progress, while recognizing the fight for gender equality is not over.

It is not only important to praise the women you know, but those that you may have never met. Local teachers and small business owners often go underappreciated, but DC Swim Week — who organize a fashion show of the same name — has been working to change this. Since 2015, the organization has aimed to empower and encourage women. Their most recent event, the Women in the Arts Pop Up Festival, switched the focus towards female independence.

The free event on Friday spanned three showrooms in Georgetown, while other pop-up shops followed on Saturday and Sunday. The event was created to celebrate the worldwide call for equality and appreciation; DC Swim Week decided to do this by supporting local women and allowing them to gain exposure through the event. Female artists and entrepreneurs in the DMV were hand-selected from roughly 400 applicants to showcase their talents.

DC Swim Week is all about making women comfortable in their own skin, said Danae Alexander, an employee of the organization.

“Men dominate [the] retail and arts scene,” she said. So, the event was intended to “give women an outlet” to display their talents without male interruption.

While the pop-up was designed to encourage patrons to shop and purchase items from the artists, the curated exhibits had far greater significance. The event fostered inspirational conversation, as female shoppers and vendors were able to share moving stories of what drove them to the pop-up or to their craft. Businesses that were showcased included those selling soaps and shampoos, jewelry, paintings, prints, among other items.

Event volunteer Maria La Rocca was motivated to help after studying graphic design in Spain. Her experiences delving into the country’s “machismo” culture were shocking at first.

“I personally have been told by one of my friends ‘you can’t do that,’” La Rocca said, referring to one of her travel experiences.

While she realized the power of internalized misogyny when in another country, La Rocca said she wanted to become more aware of inequalities in the United States, and grow more comfortable with speaking out about them.

It is somewhat surprising that an event held by a company like DC Swim Week could bring women with ideals like La Rocca’s together. While Alexander spoke about the organization’s goal of increasing female confidence and comfort, promotional videos for DC Swim Week’s showcases and shows appear contradictory. A lack of inclusivity and diversity is apparent, as the same thin models that women have been forced to watch in popular culture for decades walk their runways. It is no secret that media like this is damning for female self-confidence.

Yet, while women are often objectified on the DC Swim Week runway, female entrepreneurs at their pop-up appeared empowered and independent.

It is incredible to see female entrepreneurs advocating for themselves. 76 women were able to bring more attention to their arts, their businesses and themselves. Yet the pop-up similarly lacked diversity. Many women showcased heavily-gendered works like paintings, homemade soaps and shampoos, jewelry and natural clothing.

While DC Swim Week brought women together in this event, counterintuitive and stereotypical details pointed towards which gender-related issues should be addressed in the future. In the spirit of International Women’s Day, the volunteers and artists in attendance should continue to progress forward.