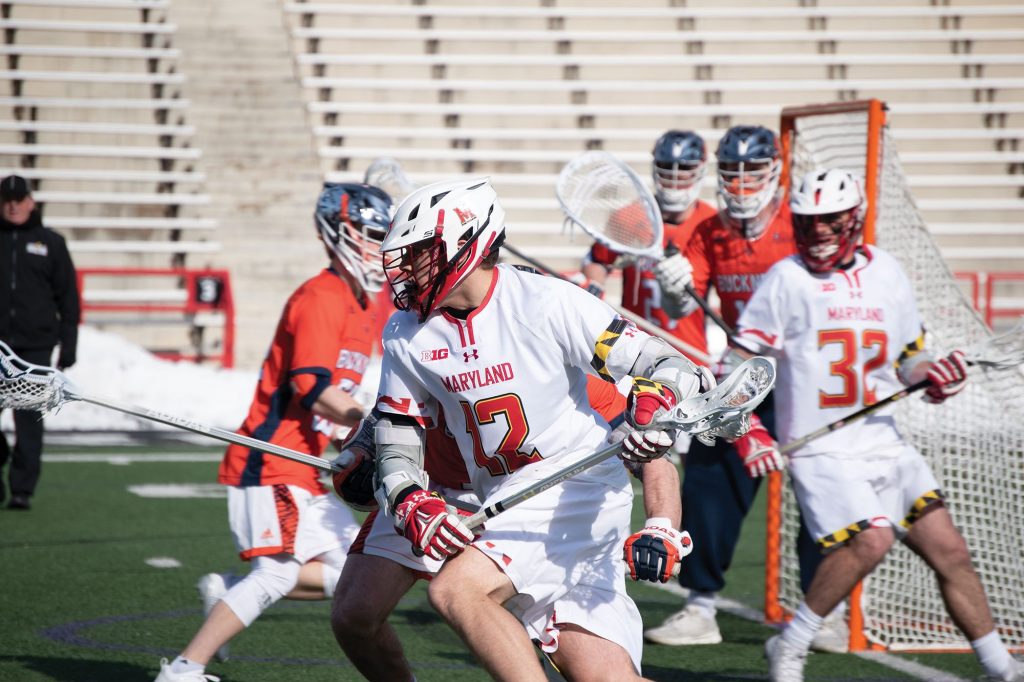 Midfielder Logan Wisnauskas brings the ball around during Maryland’s 11-6 win over Bucknell at Maryland Stadium on Feb. 2, 2019. (Joe Ryan/The Diamondback)

Maryland men’s lacrosse’s attack worked the ball around, but couldn’t make any real progress toward goal and struggled to find open looks. A full 80-second possession clock had expired with four minutes left in the first quarter, and the Terps were searching for answers.

The shot clock violation was Maryland’s second in a scoring drought that lasted more than 12 minutes in the first quarter, and it became its fourth turnover during that span.

“It kinda looks back on us,” attackman Jared Bernhardt said of the stretch. “A lot of it is us hurting ourselves.”

But the solution came with an extra-man chance that ignited the No. 7 Terps attack to overcome a slow start and produce one of their best offensive performances this season in a 14-9 win over Albany on Saturday at John Fallon Field.

“A lot of it was taking what they gave them,” coach John Tillman said. “Off-ball movement and everybody’s sharing the ball, and based on some of those things it allowed them to get some opportunities.”

Following an Albany penalty for too many men on the field, Maryland’s extra-man unit trotted on the field, trailing 1-0, looking to break a string of 10 consecutive failed chances on man-up opportunities.

After the Terps’ loss to Notre Dame last week, Tillman said the coaches may look to rotate the personnel on that group, On Saturday, it was midfielder Will Snider inserted for attackman Steven Shollenberger.

Maryland (6-1) worked the ball around to the wing, where midfielder Anthony DeMaio fired a lefty shot into the back of the net for the Terps’ opening score over 12 minutes into the game.

“It definitely gave us a little bit more confidence,” DeMaio said. “To see that one go one, and see the ball go in the net on man-up, helps you with your confidence.”

In the second quarter, the confidence carried over as Maryland’s attack found its rhythm against an Albany (1-4) defense who had struggled through its first four games of the season, ranking 62nd out of 73 Division I teams with 14 goals allowed per game.

Each of the top-three attackman — Bernhardt, Louis Dubick and Logan Wisnauskas — netted goals for the Terps, with Bernhardt scoring twice. Freshman midfielder Kyle Long also scored his third goal in the last two games after going scoreless through the team’s first five matchups.

The five-goal outburst matched Maryland’s highest-scoring quarter of the season going into the game, and the team took a 7-2 lead into halftime.

But in the third quarter, it was Albany finding a groove on the attacking end of the field, adjusting without one of their top attackmen in Tehoka Nanticoke, who was dressed on the sideline but did not appear.

Dubick scored on an extra-man chance to get one goal back, but the Great Danes responded with two more third-quarter tallies to outscore the Terps 4-1 in the frame.

With the defense not as stout as it was in the first half, Maryland relied on its attack once again to cement the result. The attack poured in six goals in the fourth to set their new highest-scoring quarter of the season.

“Those guys are all kind of experienced guys,” Tillman said. “Their big thing is, ‘Hey, let’s just get organized, let’s play, let’s just keep doing our thing and don’t get distracted by whether they’re scoring or what’s happening in the game,’ and having that poise is a really important thing for us.”

As he did all game, Bernhardt served as both a scorer and facilitator in the fourth, scoring once and dishing assists twice during his three-goal, five-assist afternoon, a new career-high in points for the junior with eight.

Despite the slow start to the game, Maryland’s attack still tied their season-high in goals, spurred on by the offensive onslaught in the five-goal second quarter and six-goal fourth quarter.