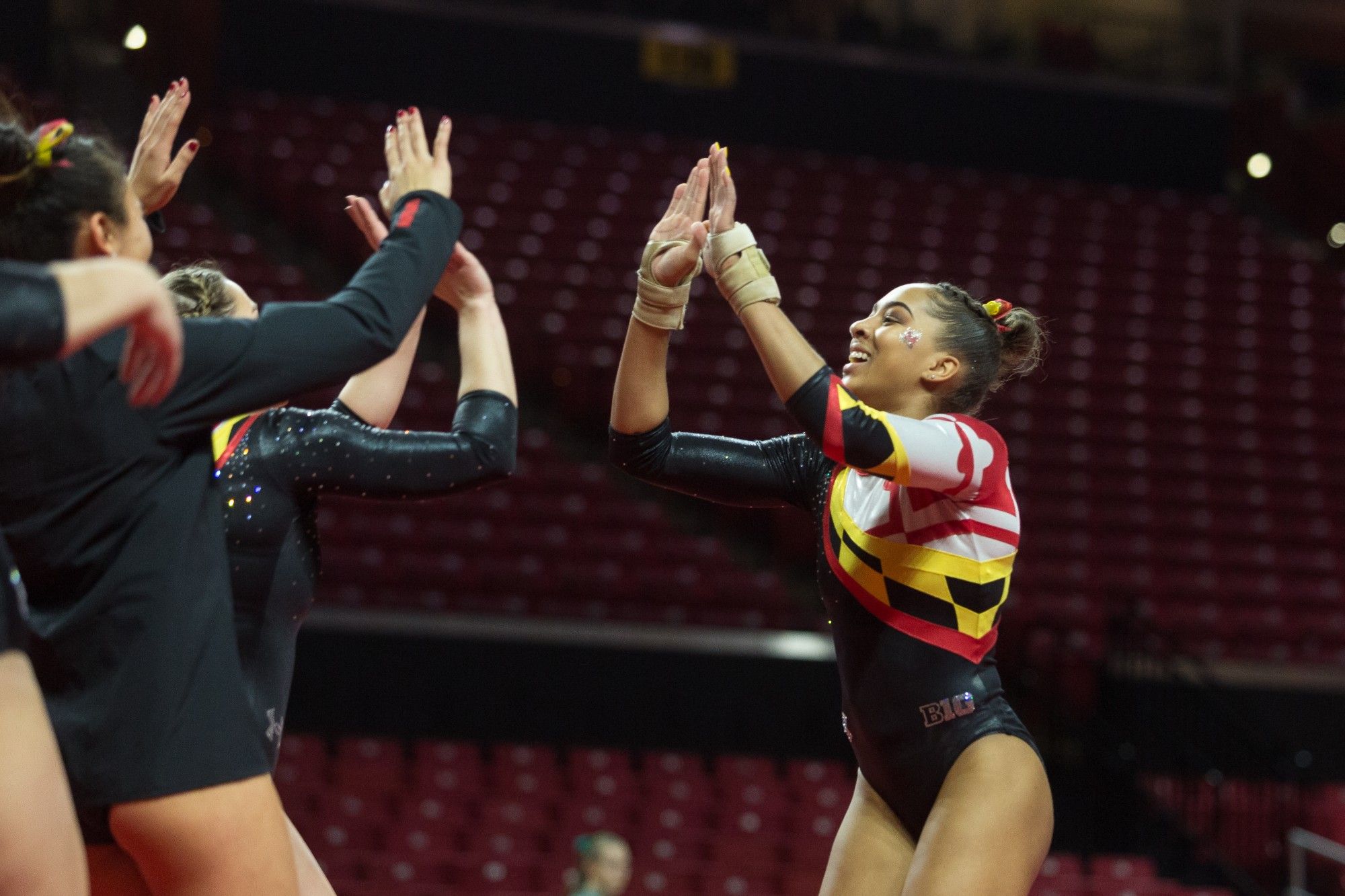 As soon as Audrey Barber began her floor routine, her Maryland gymnastics teammates were right there with her, mimicking her every movement in an effort to energize the sophomore and push her toward yet another 9.8 score.

Barber obliged, matching her season-high in the event with a 9.85 and pushing the Terps to a floor score above 49 for just the third time this season and the second in as many meets.

The performance perfectly encapsulated Friday’s meet for the Maryland squad, which traveled to Philadelphia to take on Temple, Southern Connecticut State, and West Chester. The Terps exhibited the qualities that brought them to NCAA Regionals last season, earning 49s in three events en route to a season-high 195.975 team score and three wins.

“I’m really proud of them,” coach Brett Nelligan said. “They did an incredible job. We had a quick turnaround, and they came out on fire and ready to go.”

The Terps started on bars, an event they struggled on last weekend. However, after spending much of the week focusing on bars, the Terps entered Friday’s meet revitalized.

Junior Tiara Wright earned a 9.9, the highest bar score for a Terp gymnast this season. And Barber added a 9.85 to headline a much-improved display for the Terps in which four gymnasts earned a 9.8 or above. It helped the Terps roll to a 49.05 score and an early lead in the competition.

“Tonight, we had a really positive attitude,” Wright said, “We went back in the gym and focused on small details … and it really showed.”

Maryland impressed on beam during its double weekend, posting at least a 48.825 in each of the past two meets. Entering Friday, the Terps were hoping to inch closer to that elusive 49 mark. And while they were unable to break 49, Maryland was consistent, as Barber’s career-best 9.875 powered a solid 48.8 score. Senior Shynelle Agaran posted her first 9.8 score of the season, an impressive feat given her injury struggles during the first half of the season.

After a season-best floor exercise powered Maryland to a shock comeback victory Monday against George Washington, the Terps were hoping to keep the momentum going on Friday. Junior Kirsten Peterman got Maryland off on the right foot, as her 9.8 set a new season high in the event.

Peterman’s strong showing on the floor foreshadowed Maryland’s overall success in the event. The Terps earned a 49.125 mark, and sophomore Sabriyya Rouse posted a new career high 9.875 score to spearhead another steady showing by the Terps, who had four gymnasts earn at least a 9.8 in the event for only the second time this season.

“Sabriyya’s floor really stuck out tonight,” Wright said. “She’s been working so hard in the gym, and it really showed today.”

Maryland finished the meet on vault, hoping to break through the 49 plateau for the first time this season. Already sporting a big lead over their opponents, the Terps entered the last event with a confidence that showed during their routines.

All six gymnasts earned at least a 9.7 as Maryland cruised to a season-high 49 team score on vault. Standout efforts from freshman Alexsis Rubio, who earned her fourth 9.8 of the season, and Barber, who tallied a 9.825 and secured her fourth 9.8 of the evening, powered the Terps to wins over Temple, Southern Connecticut State and West Chester.

Maryland will be hoping to build on its impressive performance as the Terps return home on Sunday to take on Brown, Penn and Southern Connecticut State on Senior Day. While the quick turnaround raises concerns about mental and physical fatigue, the Terps are unfettered by the challenges and are instead looking forward to acknowledging their seniors’ contributions to the team.

“This team is absolutely ready for Sunday,” Nelligan said. “They want to come together and put up another great meet for our seniors and honor them and send them out the right way.”